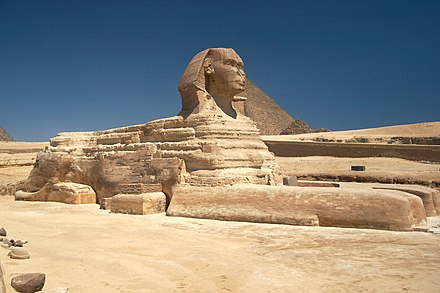 Egypt's pyramids, built by pharaohs, were made to last. Especially the Great Pyramid of Giza. Reason is, it is big at the bottom. It is mob-proof. Even Superman would have problems. If he toppled it, it would tip right back up, like a Bozo Bop Bag. Poisonous gases, worse than kryptonite, lie in hidden crypts. Egyptians knew what they were doing.

"Exactly," I said. "Because pharaohs are gods. They built the Great Sphinx of Giza, also. Now that is formidable!"

"Excuse me." A voice from the sky called. "Egypt's sphinx is lame. He lays there like a lap dog. Doesn't know if he's a man or a woman."

"Then why did you call him he?"

"Cuz his beard fell off. Although she still could be gender fluid. With the sand erosion, you never know. Even the paws are gone."

"I am daughter of the Chimera!" the voice cried. "I speak for the other sphinx, the Greek Sphinx, in the City of Thebes, the nasty one, since I ask a riddle of anybody who passes by, and if they fail to answer, I strangle them."

"Actually," I said, "you might consider running for politics. You could put a pyramid on our dollar bill."

"SILENCE!" the voice boomed. "I already did!"

"Well," I said, "I wouldn't feel too uppity, if I were you. People are toppling statues for all kinds of reasons."

"People?" Laughter boomed from the sky.

"Yeah, you know. They don't want to honor monuments built by slaves, or even monuments built for slave owners. Sometimes, pharaohs killed their slaves, so they could serve their masters in the afterlife. The slaves were black, by the way."

Suddenly, thunder lit up the sky. Magically, a rainbow appeared. Multi-colors everywhere. No black or white, of course.

Related Topic(s): BLM; Cancel Culture; Egyptian History; Masters; Monument; Pharaoh; Sphinx, Add Tags
Add to My Group(s)
Go To Commenting
The views expressed herein are the sole responsibility of the author and do not necessarily reflect those of this website or its editors.

A Stroll Along the Russian-Chinese-North Korean Border