Is it time to bring a monarchy to the United States, or time to end one? 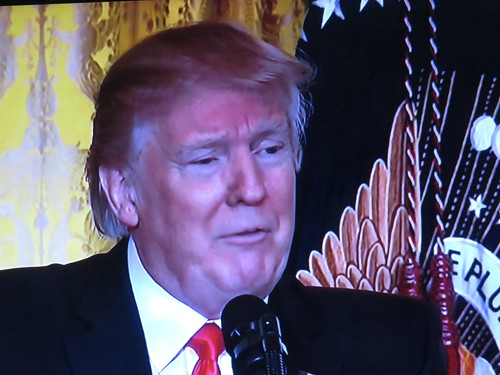 #Trump is King of #FakeNews and master of BS.
(Image by kennethkonica)   Details   DMCA

The New York Times recently ran a fascinating article by Leslie Wayne putting forth arguments from the International Monarchist League. Summarizing them, Wayne wrote, "Their core arguments: Countries with monarchies are better off because royal families act as a unifying force and a powerful symbol; monarchies rise above politics; and nations with royalty are generally richer and more stable."

What the author misses is that we already have an aristocracy here in the United States: rule by the rich. In fact, much of American history is the story of the battle between the interests of the "general welfare" of our citizens, and the interests of the #MorbidlyRich.

Here's where we are right now:

Franklin Delano Roosevelt stepped up to challenge those he called the Economic Royalists, explicitly calling them out. In 1936, FDR said:

"For out of this modern civilization economic royalists carved new dynasties. New kingdoms were built upon concentration of control over material things. Through new uses of corporations, banks and securities, new machinery of industry and agriculture, of labor and capital -- all undreamed of by the Fathers -- the whole structure of modern life was impressed into this royal service.

"There was no place among this royalty for our many thousands of small business men and merchants who sought to make a worthy use of the American system of initiative and profit...

"It was natural and perhaps human that the privileged princes of these new economic dynasties, thirsting for power, reached out for control over Government itself.

Related Topic(s): Aristocracy; Corporations; Money; Politics; Power; Royalty, Add Tags
Add to My Group(s)
Go To Commenting
The views expressed herein are the sole responsibility of the author and do not necessarily reflect those of this website or its editors.