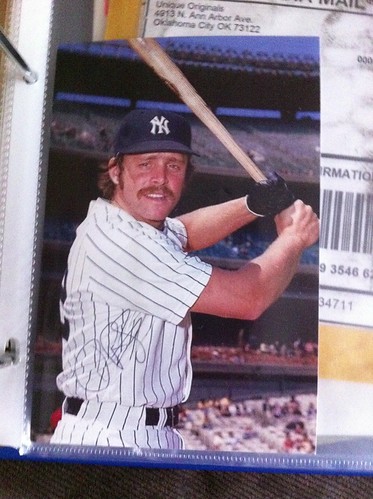 Ron Blomberg of the New York Yankees was the first DH in Major League Baseball.
(Image by Super-Nerd)   Details   DMCA

OK, baseball purists, welcome to 2021. Finally free of the obligation to try to make sense of the daily tweet storm, I have lately been pondering one of those niggling, lifetime questions. And it's not political at all.

I'm wondering when National League team owners will come to their senses and sdopt the designated hitter rule permanently, not for just one pandemic-shortened season. I mean, really, after nearly a half century of acting superior to their fellow millionaires in the American League, who eagerly embraced the DH, aren't the "purists" tired of watching pitchers flail awkwardly at routine fastballs and sometimes hurt themselves in the process?

Why not give them a break from the embarrassment as well as the added risk of injury running the bases should they accidentally hit the ball? Let them focus on pitching, which is literally all they've done since graduating from high school.

The National League is one of the few leagues in the world that still requires pitchers to bat. All but a handful of minor league teams switched to the designated hitter around the same time as the American League, 47 years ago. That's how today's pitchers grew up in baseball pitching and rarely hitting. Hitting a baseball is not easy when you do it regularly; it's almost impossible when practicing it is an afterthought.

Yet, once again, it appears that the National League and the players union could not come to agreement on using the designated hitter for the 2021 season. Although the arguments around use of the DH generally focus on the so-called "purity" of the game, when the owners and players are involved in any discussion, money is usually the central issue.

Frankly, I have no sympathy for either side. This is a bunch of rich men - the players - versus a bunch of richer men, the owners. Everyone's got plenty of money. The goal here should be to make the game more interesting and exciting so that more people come to the ball park, when allowed again, and more watch on TV, which will add to advertising revenue. More money. Plus, you can give some popular veteran players another year or two in the majors.

Some say the DH takes away the element of strategy, but a double up the alley or a home run is a lot more exciting and productive than a sacrifice bunt or a strike out. I am what you might call an old school baseball guy, but school has been out for a long time. More hits and runs tend to make the game more exciting to watch over a season. By the same token, watching a pitcher easily frustrate a lineup of supposed sluggers is also impressive. I'd rather watch Jacob deGrom pitch than hit. So would most Mets fans, who remember his elbow injury suffered while swinging futilely at bat a couple years back.

Baseball may have been the national pastime at one time, but football has assumed that position. It has changed to meet the times. So has basketball. There's a lot of competition for the sports fans' attention these days and most younger baseball fans have not grown up savoring the delicious question of whether the manager should remove a pitcher for a pinch-hitter in the eighth inning, even though he's pitching a great game, because his team is down by one run and there's no one on base. Today, the pitcher is likely to have been removed in the seventh-inning because he exceeded his pitch count, even though he's pitching a great game.

It's a different game. Pitchers are coddled to protect their arms. Why expose them to injury and embarrassment by making them bat when they haven't been allowed to practice that skill for years? And why, for heavens sake, have a different set of rules when both leagues are under the auspices of Major League Baseball?

There are a handful of pitchers who are actually fairly decent hitters in major league baseball. If they're that good, the manager can feed their egos and use them as a pinch-hitter once in a while. Embarrass a position player by having a pitcher hit for him. That might shake him up.

Football pretty much eliminated the two-way player and goes out of its way to protect the most valuable player, the quarterback. If pitching really wins games, as all the baseball experts insist, then let the pitchers focus on pitching. And, for the purists, having a designated hitter for the pitcher might just keep that baseball staple, the hit-and-run, alive.

Moneyball pretty much did away with the sacrifice bunt. Not only pitchers, but most major leaguers, are lousy at it today. Asking pitchers, some of whom can throw the ball 100 miles an hour, to also try to hit a pitched ball coming at 100 miles an hour, when they've had virtually no opportunity in their careers to do so in fact, were never asked to do so is unrealistic and unfair.

Besides, after the Babe, the phrase "good-hitting pitcher" became an oxymoron.

Related Topic(s): Baseball; Designated Hitter; Football; Injury; Major League Baseball; Millionaires; Money; Purity; Rules; Sports, Add Tags
Add to My Group(s)
Go To Commenting
The views expressed herein are the sole responsibility of the author and do not necessarily reflect those of this website or its editors.