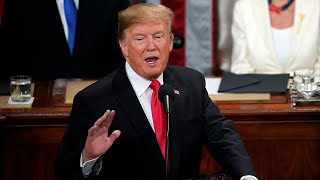 Trump condemns socialism at State of the Union address.
(Image by You Tube)   Details   DMCA

It's that time of year again -- when we're encouraged to celebrate Black history, and soon it will be Women's History Month -- the time when people like me ask, "What about the rest of the year?"

This season, Black History Month coincides with the start of the presidential primary campaigns. On the Democratic side, we're already seeing journalists stretching for their pencils to divvy the candidates up. So far, the main divides they've identified seem to stem from which of the contenders lead with race and gender justice, and which want to sock it to the corporations.

But those social vs economic distinctions aren't going to hold up for long when every last Democrat, for all their faults, is a civil rights paragon in contrast to the Klan-endorsed guy in the White House.

No, this primary campaign is not going to be about where Democrats stand on things like abortion and marriage and voting rights, but rather on where they stand on property rights and public ownership and workplace democracy and taxes. Much as they're out of practice, journalists are going to have to grapple with economics.

So far, this hasn't gotten more granular than asking candidates if they call themselves Democratic Socialists. We're going to have to do better than that.

Just as we need to get beyond the superficial celebration of abolitionist heroes to take a look at the ideas and assumptions that underpin white supremacy, so, too, we need to look at the lens through which we think about wealth.

Conveniently, the questions aren't that different. Are our life choices and outcomes determined by ourselves alone in an objective world free of bias? Are our successes affected by our individual character alone or also by social structures -- things like systematic privilege? If the former, a few reforms will do; if the latter we need to shake things up.

Donald Trump is already throwing around invective about socialists. At the very least, we need a Socialist History Month to sort things out. May would be fine. Much better than that, we need to take a long, hard look at the ideology that underpins what we call capitalism. On that, like it or not, the clock is quite clearly ticking. If we have to have such a long campaign season, let's make it a season of great debates.

Related Topic(s): Socialist Democrats; Socialist Party Usa, Add Tags
Add to My Group(s)
Go To Commenting
The views expressed herein are the sole responsibility of the author and do not necessarily reflect those of this website or its editors.