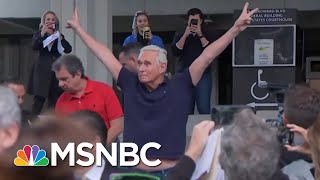 The 2020 presidential race didn't get decided this week, but the choice before us did: more democracy or less of it. That's the decision we are facing, and if the Democrats manage to foul this up, they may not get another chance.

The very same day that New Hampshire held its primary, the president was out there bullying federal workers via Tweet. By the end of the night, Trump's criminally-convicted chum Roger Stone's sentence was suspended, and the Constitution, the impartiality of the courts and the supposed rule of law had taken one more power-addled hit.

Democracy on the one hand, autocracy on the other. Whatever you think of the race so far, the stakes for the nation don't get much clearer than they did Tuesday night. And whatever you think of their candidates, democracy should be something Democrats could sell. While the word may be Greek (a plural noun meaning we the people, the populace, us), the idea's beloved by Americans. Any Coca-Cola or Cadillac seller can tell you that.

Ranked along the democracy spectrum, Bernie Sanders and Elizabeth Warren stand out. Demos-driven, decrying big-dollar power, no billionaires bankroll their field campaigns, no self-interested, anonymous sources shell out for their TV ads. Bernie's socialism, when it's not explained by haters, has everything to do with more choices for more people, not fewer. Warren's many plans speak to the world of input she's gotten and seems to have taken to heart.

At the other end of the spectrum is Michael Bloomberg, the three-term Mayor in a two-term limit town, the stop-and-frisk, my-way-or-the-highway CEO in a land of laws defending civil rights. If there is one way for the Democrats to bungle this battle for democracy, Bloomberg is it.

Already, thanks to a DNC rule change, Bloomberg will participate in the Nevada debate without having won a single delegate or small donation. He'll come to Super Tuesday fresh, having campaigned for months via a one-way media megaphone, while his opponents have had to sweat it out under spotlights, handshake by handshake -- the senators squeezing in their public service too in the impeachment trial, trying to rein in the predator in chief.

The Democratic establishment's clearly rattled. It's not democratic socialism they fear, they say, rather Trump's vilification of it. But while Trump will surely red-bait Sanders, he'll just as certainly banker-bait Bloomberg. The real question is, for which is the DNC willing to go to bat? The demos or the autocrat?

In 2016, the wolf now in the White House dressed up in "outsider" clothing and cast himself as the dragon slayer of the Democratic establishment -- a developer David vs. New York's Goliaths. The Donald was lying, but it worked, and he's run with it ever since. There's no indication that he's about to change course. If the 2020 choice becomes one between the bully-in-chief's MAGA muscle-Ts and Wall Street's clean "I Like Mike" shirts, a lot of us who hanker for a broader demos will see ourselves in none of it.

Democracy vs. Dictatorship. Democrats should not be able to lose that race, but they could. And what comes next is worse.

Related Topic(s): 2020; Billionaires; Bloomberg News; Debate; Democracy; Democrats; Trump, Add Tags
Add to My Group(s)
Go To Commenting
The views expressed herein are the sole responsibility of the author and do not necessarily reflect those of this website or its editors.