Click Here to Remove All Ads
Cutting School Staff: Who Will Be Harmed? Palisades Charter High School takes money from a program meant for small businesses without a plan of how it will be spent.
(Image by YouTube, Channel: Carl Petersen)   Details   DMCA

"Study Center tutor helping hundreds of kids pass classes and graduate from Pali during e-learning, especially the students who can't afford private tutoring and especially students with special needs and difficult economic circumstances."
- Public comment before Palisades board votes to eliminate the position

With unemployment rates reaching levels unseen since the Great Depression due to the problems caused by the failed response to COVID-19, every dollar from the Payroll Protection Program (PPP) should be going towards helping small businesses survive. Unfortunately, the charter-school industry found a way to double-dip into the government trough to supplement the money they are diverting from public schools with funds from this program.

Despite acknowledging that they could be taking money away from small businesses that needed it to survive the crisis, the governing board of Palisades Charter High School voted last month to accept a $4.606-million-dollar loan from the PPP. They admitted at the time that they did not have an immediate need for the money and they failed to articulate a plan to spend the money or to pay it back. They simply felt that it was important to "get the money while the getting's good". Discussion of the moral and financial costs of receiving this money was swept aside. 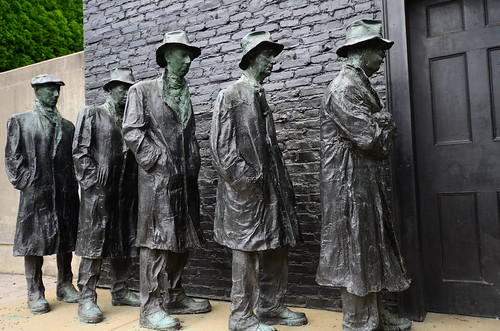 Depression Bread Line by George Segal
(Image by slgckgc)   Details   DMCA
Ignoring the reason for their $4,606,000 windfall, the governing board of Pali voted this month to lay off five members of their staff and reduce the hours for 18 other employees. Even as students throughout the country struggle to transition to distance learning, these cuts included an IT Tech assigned to helping parents, students and teachers navigate the technology needed in this new learning environment. They also eliminated a Tutoring Center Coordinator whom a member of the public and a board member credited with "helping hundreds of kids pass classes and graduate from Pali during e-learning". A Library Media Technician, Copy Clerk, and Office Assistant will also join the unemployment line in 60 days.

In justifying the cuts, the school's Director of Human Resources, Amy Nguyen, implied that the positions were not needed even when students return to the campus. She stated that "we don't need [the tech] position" as other techs could do those jobs. Since libraries have changed in the past decade, they "don't need a full-time classified person... in the library" and office assistants could do the job in their free time. The job responsibilities of the others who were let go could be "fulfilled by other people who need additional work".

If Nguyen's statements are true, then one has to wonder why it took a pandemic to motivate the board to take action. The governing board is supposed to be stewards of the public money that is provided to their school. If they are keeping positions filled that are not needed, then they are failing at their jobs.

This Is Not The Public Meeting You Are Looking For Palisades Charter High School takes money from a program meant for small businesses without a plan of how it will be spent.
(Image by YouTube, Channel: Carl Petersen)   Details   DMCA
While the board did allow for public comment on the resolution before taking a vote, the Palisades board was not in full compliance with the Brown Act, which ensures that meetings of public entities are fully open to the people they serve. Most importantly, they required that those presenting comments to the board provide their full names. This opens up to retaliation anyone who provides an opinion counter to the administration's wishes and is the reason that the Brown Act allows commenters to remain anonymous. The board also invited questions but refused to answer the more challenging ones by declaring that they were statements.
2 On Your Side: Charter School Complaints A popular Westside charter school is accused of potentially illegally restricting enrollment after a Spanish speaking student claims his application was held up ...
(Image by YouTube, Channel: CBS Los Angeles)   Details   DMCA
One of the stakeholders who came forward despite the illegal requirement that they provide their full name noted that many of the positions eliminated would disproportionately affect students from low-income families or who have special-education needs. This is particularly concerning for a school that already has a significantly lower percentage of students (36.7%) who are socioeconomically disadvantaged than the LAUSD, where 79.3% of the students are eligible for free and reduced-price lunch. Last year the school had to change the way they enroll students who live in their attendance area when the news media caught them requesting information that appeared to make their enrollment practices discriminatory.

Palisades' acceptance of PPP funds and the lack of accountability for how these funds will be spent provides further proof that charter schools are not public schools. Instead, their actions prove that they are businesses that get their income from public funding. The public must hold them accountable to ensure that this money is spent appropriately on the children that they are supposed to serve.

Depression Bread Line by George Segal
(Image by slgckgc)   Details   DMCA
________________________________
Carl Petersen is a parent, an advocate for students with special education needs, an elected member of the Northridge East Neighborhood Council, an appointed alternate to theLAUSD's CAC, and was a Green Party candidate in LAUSD's District 2 School Board race. During the campaign, he was endorsed by the Network for Public Education (NPE) Action and Dr. Diane Ravitch called him a "strong supporter of public schools." Links to his blogs can be found at www.ChangeTheLAUSD.com. Opinions are his own.