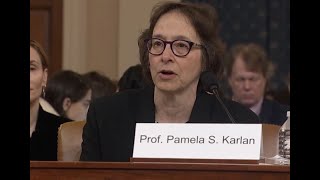 The framers were sure that all power should be derived from the people. They were also sure that the power of the voters should not be limitless. We see that in the creation of the Electoral College and, yes, in assigning to Congress the right and responsibility of impeachment. Those expressions can at times be at odds. At those moments when impeachment is necessitated, a delicate balance is essential.

In totality, the constitutional experts who testified as to the appropriateness of impeachment at this moment in US history found that impeachment was clearly warranted. In fact, urgently.

The practical balance is between the political component and the constitutional requirement to confront high crimes and misdemeanors on the part of the president. Fortunately, the two are not mutually exclusive.

Democratic leadership wants to address the political problem by getting it over with as far out from the 2020 presidential election as possible. It's an imperfect but not necessarily fatally flawed plan. They can do that and still succeed if they don't further complicate the process.

It bears noting that there is little indication that the vast majority of Trump's curiously loyal base is in any mood to abandon him, regardless of what evidence the Democrats come up with. As long as that's the case, the chances that any Senate Republicans will vote to convict and remove him from office are slim to none. In that context, the impeachment of Donald Trump really is a constitutional duty.

Do Not Bury the Mueller Report

Forgetting the Mueller Report as a matter of political expediency flies in the face of the constitutional duty of impeachment. If you're impeaching because it must be done, then you must necessarily include the special counsel's voluminous evidence of felonious high crimes. To ignore that would defeat the purpose. If the Ukrainian affair is easier for the voters to understand, then make that the focal point of the presentation. But do not bury the Mueller Report, that's foolhardy. Skill here matters.

A number of current and former Trump administration officials are not yet testifying before Congress for reasons that appear unlikely to be tolerated by the courts. Again, those subpoenas and witness testimonies can be pursued without derailing the Democrats' preferred timeline. Publish the Articles of Impeachment, hold the vote, and go to trial in the Senate. However, on a separate track, enforce the subpoenas and compel the witnesses to testify. The testimonies may not come in time for the Senate trial, but when they do come you can be sure they will matter. Get the testimony on the public record.

Sure, the Republicans can acquit Trump in a Senate trial. But if John Bolton follows that up shortly with bombshells, the Republican exit strategy becomes a lot more complicated.

If the Democrats want to push an expedited timeline, they can do that. But they should not bury the Mueller Report, and they should absolutely pursue the subpoenas and witness testimonies. Bolton, McGahn, and others can testify; Parnas and Fruman are already charged; Giuliani may well be. Donald Trump is out there creating ever more mayhem as each day passes.

This is going to be a long, fluid battle. Don't throw anything of value away. Keep all options on the table, before the Senate trial and after.

Related Topic(s): Congress; Democrats; Evidence; Impeachment; Subpoena, Add Tags
Add to My Group(s)
Go To Commenting
The views expressed herein are the sole responsibility of the author and do not necessarily reflect those of this website or its editors.