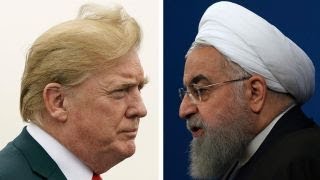 On July 22, during a meeting at the White House with Pakistan Prime Minister Imran Khan, President Trump alluded to military plans in which the U.S. could "win the war" in Afghanistan in a matter of days. "I could win that war in a week, I just don't want to kill 10 million people," Trump said. "Afghanistan would be wiped off the face of the earth."

Trump did not explicitly say what weapons would be used to achieve this outcome. However, his comments implicitly invoked the use of nuclear weapons, the only military resource in the U.S. arsenal capable of killing that many people in such a short time. While it is highly unlikely President Trump reviewed any such plans regarding Afghanistan (he has been known to lie on occasion), the fact that he chose to mention a scenario that invoked a massive U.S. nuclear strike sent a signal to Afghanistan's neighbor, Iran, that when it comes to resolving the ongoing crisis over Iran's nuclear program, all options were, indeed, on the table.

Americans have become accustomed to presidents capable of rationally managing the awesome power of the U.S. nuclear arsenal, dating back to President Kennedy during the Cuban Missile Crisis. For two weeks in October 1962, the world was on the verge of global nuclear annihilation. President Kennedy was under pressure from the Pentagon to use military force to prevent the Soviet Union from installing nuclear-armed medium- and intermediate-range ballistic missiles on the island that would threaten much of the southern and eastern United States. Nuclear war was ultimately averted; Kennedy disregarded the advice of the military chiefs, opting instead to rely upon diplomacy.

One of the factors that weighed on Kennedy was the consequences of a nuclear conflict. In July 1961, Kennedy had been briefed for the first time on the U.S. nuclear war plan. After hearing an estimated 48 to 71 million people in the U.S. would be "killed outright," with another 67 million in Russia and 76 million in China likewise perishing, Kennedy said to Secretary of State Dean Rusk, "And we call ourselves the human race." That moral rejection of nuclear mass murder became the standard that had guided successive presidents when it came to nuclear conflict.

Trump's casual reference to murdering 10 million Afghans wasn't the first time he had threatened to use nuclear weapons in a precipitous fashion. In August 2017, while responding to statements made by North Korean leader Kim Jong Un, Trump declared that "North Korea best not make any more threats to the United States. They will be met with fire, fury and frankly power, the likes of which this world has never seen before."

On Nov. 14, 2017, the U.S. Senate Foreign Relations Committee did something it hadn't done in 41 years -- addressed the authority to use nuclear weapons. In convening that hearing, the Republican chairman, Sen. Bob Corker, observed, "Making the decision to go to war of any sort is a heavy responsibility for our nation's elected leaders, and the decision to use nuclear weapons is the most consequential of all." His Democratic counterpart, Sen. Ben Cardin, added in his opening remarks, "Given today's challenges, we need to revisit this question on whether a single individual should have the sole and unchecked authority to launch a nuclear attack under all circumstances, including the right to use it as a first strike."

But the event that prompted the U.S. Senate to convene such a rare hearing wasn't casual curiosity about U.S. nuclear launch authority, but rather the words of President Trump regarding North Korea. Cardin noted in his opening remarks that, in reference to Trump's statement, "many interpret that to mean that the president is actively considering the use of nuclear weapons in order to deal with the threat of North Korea. That is frightening."

Robert Kehler, the former commander of the U.S. Strategic Command and a retired Air Force general, told the committee, "The decision to employ nuclear weapons is a political decision requiring an explicit order from the president." However, Kehler said, "the law of war governs the use of U.S. nuclear weapons. Nuclear options and orders are no different in this regard than any other weapon," adding that "the legal principles of military necessity, distinction and proportionality also apply to nuclear plans, operations and decisions."

Under questioning from Cardin, Kehler was given a scenario in which the president, after consulting with his advisers, is told that "under the guidelines on proportionality and necessity, that this is not appropriate for use of a nuclear first-strike. Is there action that can be taken by those advisers if the president overrules that decision and says, no, we are going with a nuclear attack?"

"If there is an illegal order presented to the military, the military is obligated to refuse to follow it. Now the question is just the one that you described. It is the process leading to that determination and how you arrive at that. I would concede to you that that would be a very difficult process and a very difficult conversation. But in the scenario that you are painting here, I would also argue that there is time for that kind of a deliberate conversation on these matters."

Gen. John Hyten, the current commander of Strategic Command and Trump's nominee for vice chairman of the Joint Chiefs of Staff, expanded on Kehler's points a day after that 2017 Senate hearing. In comments made at the Halifax International Security Forum, Hyten said: "I provide advice to the president, he will tell me what to do. And if it's illegal, guess what's going to happen? I'm going to say, 'Mr. President, that's illegal.' And guess what he's going to do? He's going to say, 'What would be legal?' And we'll come up with options, with a mix of capabilities to respond to whatever the situation is, and that's the way it works. It's not that complicated."

Except that it is, in fact, very complicated.

Related Topic(s): Iran; Jcpoa; Korea; Nuclear Meltdown; Nuclear Plants; Nuclear Power Plants In Iran; Nuclear_insanity; Sanctions; Stop Trump Movement; Thermonuclear, Add Tags
Add to My Group(s)
Go To Commenting
The views expressed herein are the sole responsibility of the author and do not necessarily reflect those of this website or its editors.