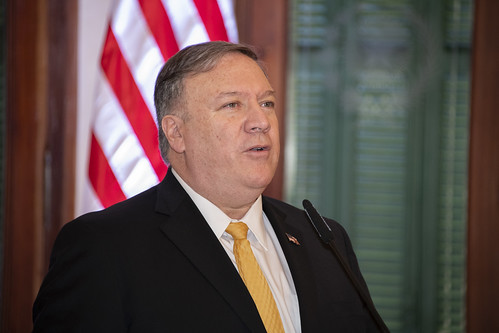 After much back-and-forth posturing by the Trump administration, book-ended by national security adviser John Bolton accelerating the planned deployments of an aircraft carrier battle group and a B-52 bomber task force to the Middle East, and President Trump commenting, "I hope not" when asked whether there would be a war, the American commander in chief threatened to destroy Iran on Sunday. "If Iran wants to fight," Trump tweeted, "that will be the official end of Iran. Never threaten the United States again!"

Trying to pinpoint what prompted Trump to communicate what amounts to a genocidal threat is like reading tea leaves -- more art than science. But after seeing his effort to isolate Iran diplomatically rejected by a united Europe, and learning from military leaders that a war with Iran would be far costlier and much more problematic than he originally thought, the president reverted to character, lashing out with apocalyptic fury against a nation that has frustrated his administration from its inception.

Trump has backed himself into a corner. The self-imagined dealmaker sincerely believed that by applying economic pressure on Iran, backed up with the threat of force, the Iranian government would come to the negotiation table and agree to a nuclear deal that denied it everything it had achieved through diplomacy with the Obama administration. Trump believed he could bully America's allies in Europe to go along with him. And, in the end, when he asked his military leaders to provide him with options to forcefully compel Iran to bend to his will, Trump was told that nothing short of an all-out war, involving more than 500,000 troops, could provide the outcome he sought, and even then only at great cost. Trump had run on a platform that promised an end to costly wars of choice in Iraq, Syria and Afghanistan. If he pulled the trigger on Iran, his chances of reelection in 2020 would be all but eliminated.

The heart of Trump's frustration lies with the military options he has been presented with, namely "OPLAN 1002." Short for "operations plan," OPLAN 1002 is the U.S. war plan for major military conflict in the Persian Gulf. If the current state of heightened tension with Iran were to explode into a military confrontation, it would be OPLAN 1002, or some iteration thereof, that U.S. military commanders would use to guide their operations, which could include neutralizing Iran's nuclear infrastructure and securing the strategic Strait of Hormuz, through which about 18 million barrels of oil, which is 20% of global production, transits every day.

The issue of Iran's nuclear capability has moved front and center after Trump's fateful decision to withdraw from the Iranian nuclear deal last year and reimpose U.S. sanctions, including those on the sale of oil, Iran's economic lifeblood. As a result, Iran has suspended certain aspects of the nuclear deal concerning the storage of heavy water and enriched uranium and is threatening to resume the enrichment of 20% enriched uranium, restart a heavy-water nuclear reactor and install advanced centrifuges. Moreover, if the U.S. moves to impede Iran's ability to export oil, Iran has threatened to close the Strait of Hormuz to all traffic. For its part, the U.S. has promised to keep the Strait of Hormuz open through military action.

Vice Admiral Jim Malloy, commander of the U.S. Navy's Bahrain-based Fifth Fleet, embodies the arrogance that infects senior American military leadership when it comes to the issue of securing the Strait of Hormuz. His command recently assumed operational control of the USS Abraham Lincoln carrier battle group, diverted to the Middle East as part of America's military buildup against Iran. Addressing the question of whether the carrier battle group would remain in the Arabian Sea, where it currently operates, or if it would transit the strait and operate in the Persian Gulf, Malloy told reporters, "If I need to bring it inside the strait, I will do so. I'm not restricted in any way, I'm not challenged in any way, to operate her anywhere in the Middle East."

Except he is, even if he won't admit it. In the event of an all-out war with Iran, the USS Abraham Lincoln has about an 80% chance of survival while operating in the Arabian Sea provided it's neither launching nor recovering aircraft at the time. (Iran could still locate and target the carrier group using its own surveillance assets and ballistic missiles, although the freedom of movement afforded by the Arabian Sea offers a measure of protection from attack.)

Operating inside the Persian Gulf is a whole different ballgame. Iran would overwhelm the Abraham Lincoln's battle group with swarms of small boats, submarines, drones, cruise missiles and ballistic missiles, the carrier's maneuverability and operational flexibility limited by its exposure to Iran's lengthy coastline and the Gulf's shallow waters. Such an operation would reduce the battle group's odds of survival to about 20%; its chances of sustaining combat operations against Iran while operating in the Persian Gulf are virtually nil.

The vulnerability of the USS Abraham Lincoln and its eponymously named battle group is ultimately part and parcel of the larger issue of America's ability to project military power in the region today. The threat posed by Iran's military is unlike anything the U.S. has had to confront since the end of the Cold War; it most certainly has not faced anything like it in terms of sophistication and capacity during the 18-year global War on Terror that has dominated military planning since the terrorist attacks of 9/11. OPLAN 1002 was designed for a major military conflict involving modern combined arms operations. And yet, for the past two decades, the U.S. has been involved exclusively in low-intensity counterinsurgency warfare, fighting Al Qaeda and the Taliban in Afghanistan, as well as Shi'a militia, Sunni tribesmen and the Islamic State in both Iraq and Syria.

The U.S. Marine Corps, which bears the brunt of the responsibility for securing the Strait of Hormuz through its amphibious warfare capability, is no longer capable of conducting the kind of forcible-entry operations required to fulfill this mission. In short, the requirements set forth by OPLAN 1002 are unattainable for much, if not all, of the U.S. military today. Any conflict with Iran based upon the assumptions and requirements set forth in OPLAN 1002 would most probably result in an American defeat brought about not by Iran prevailing militarily, but by the U.S. being unable to accomplish its objectives, leaving Iran intact and defiant.

OPLAN 1002 is a war plan that has been decades in the making. When I entered active duty with the Marine Corps in 1984, the U.S. had just transitioned from the Carter-era Rapid Deployment Joint Task Force, formed in 1980 to secure the Persian Gulf from a Soviet attack or subversion and insurrection conducted by a Soviet proxy or regional ally, to a dedicated combat command known as U.S. Central Command, or CENTCOM. I was assigned to the 7th Marine Amphibious Brigade, which operated as the Marine Corps component of the Rapid Deployment Force, in which my first assignment was to update the intelligence annex to OPLAN 1002. That summer, I participated in a major command-post exercise conducted by I MAF (First Marine Amphibious Force), the higher headquarters for 7th MAB, in which we put OPLAN 1002 into practice, inserting (via a map-based study) a large Marine combat force into Iran for the purpose of moving inland and engaging an invading Soviet force.

Among the first things that struck me were the limitations on U.S. forcible-entry capability. One of our planning assumptions was that Iran would be a passive partner in our operations, meaning we would be able to make entry to the port cities of Chah Bahar (on the Arabian Sea coast) and Bandar Abbas (astride the Strait of Hormuz) unopposed. In preparing the intelligence annex, I had noted it was highly unlikely the Iranians would behave in such a manner, and that we should be prepared to conduct full-scale forcible-entry operations. The problem was that we didn't have the capacity to project and sustain meaningful military power ashore in a contested environment, and even if we did, our combat power would be so depleted by dealing with the Iranian threat that there would be nothing left to confront an invading Soviet force. Since our mission was to deter Soviet aggression, we manufactured planning assumptions such as a passive Iranian host to make the exercise possible.

Even with the Iranians standing by, the logistical challenges of moving personnel and equipment ashore were astronomical. Simply put, we had to artificially slow down the Soviet advance, and limit Soviet interdiction operations, so we could off-load the ships. Even then, we ignored real-world issues such as narrow shipping lanes, congestion, lack of port facilities, etc. Had this been a real-world contingency, our shipping would have experienced a traffic jam into the Iranian ports that would have made them a sitting duck for any determined opponent; any sabotage or successful attack on the port itself would have made transitioning personnel, equipment and material from ship to shore impossible.

In August 1990, Iraq invaded Kuwait, and the U.S. was called upon to implement OPLAN 1002, this time in response to a regional threat in the Arabian Peninsula. In this iteration, however, the U.S. was able to make extensive (and exclusive) use of friendly Aerial and Sea Ports of Debarkation (i.e., airfields and ports under the control of friendly forces), which allowed for the uncontested and unimpeded flow of personnel and material into the Persian Gulf and ashore in Saudi Arabia. Even under these permissive conditions, it still took months to get enough combat power deployed into the Persian Gulf to make offensive operations feasible.

Related Topic(s): Iran; Iran Nuclear Deal; Iran War; Marines; Oil; Sanctions; Threat; Uranium, Add Tags
Add to My Group(s)
Go To Commenting
The views expressed herein are the sole responsibility of the author and do not necessarily reflect those of this website or its editors.