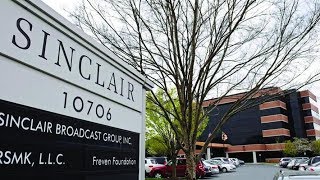 There is increasing public concern about the political manipulation of Facebook and Twitter by private corporations and foreign actors, and it's certainly warranted. Social media, especially Facebook, are increasingly mediating their users' realities in ways that traditional broadcasters can only dream about. But millions of Americans still rely on television news, and they probably give it more credence than they do to random strangers on the internet.

That's bad news, because there's fake news on your television, too. And there's about to be more of it, unless something is done to stop an upcoming merger.

Sinclair Broadcast Group is a hard-right -- perhaps even "alt-right" -- corporation that imposes its views on the local television stations it owns. It is closely allied with Donald Trump, whose administration has loosened the rules governing media conglomerates like Sinclair.

Sinclair is privately held by the descendants of Julian Sinclair Smith, who started the network of 193 stations at Baltimore's WBFF in 1971. Smith's son, David, who was the CEO until last year, apparently shares more with Trump than just his politics. Smith was arrested for the solicitation of prostitution in 2004, and reportedly forced reporters at a Sinclair station to do some of his court-ordered community service work.

(Reasonable people may differ about Smith's morality or hypocrisy. But there can be little disagreement that his offense, which took place in a Sinclair company car as it proceeded down Baltimore's Jones Falls Expressway, displayed an indifferent attitude toward both public safety and the proper operation of a motor vehicle.)

The Smith family's political opinions aren't a cause for public concern, and neither are its personal peccadilloes. But the consolidation of media into a few private hands poses great risk, and Sinclair's behavior proves it. Sinclair is abusing its power by distorting the facts to impose a predetermined view of reality on reporters at its 173 stations -- and therefore on the public.

And now, thanks to a ruling from Trump's FCC majority that benefits a Trump ally, Sinclair is poised to impose its distorted worldview on many more markets around the country. Sinclair is proposing to purchase another conglomerate, Tribune Media, in a $3.9 billion deal. It would gain 49 stations, and would sell its stations in New York and Chicago to meet station ownership limits, for a total of 220 television outlets.

If the deal goes through, Sinclair's stations will reach nearly 70 percent of all households in the United States.

What does that fake news look like? Sinclair has broadcast videos made by hoaxster James O'Keefe, who has a record of producing misleading, heavily doctored video "stings" of progressive individuals and organizations. (O'Keefe's attempt to entrap a Washington Post reporter, which reads like slapstick comedy, illustrates his methods.)

Sinclair's Circa subsidiary presents itself as an unbiased mobile news site, but reportedly skewed its reporting to its owners' political agenda after its acquisition by Sinclair.

In 2004, Sinclair refused to broadcast an episode of "Nightline" in which the names of soldiers killed in combat in Iraq were read out loud. Sinclair called the program "politically motivated" and asked why anchor Ted Koppel didn't read "the names of the thousands of private citizens killed in terrorist attacks since and including the events of September 11, 2001."

As the Washington Post reports, Sinclair planned to air a "documentary" distorting John Kerry's war record just before the 2004 election until public pressure forced it to moderate the broadcast. As the Post also reports:

"On the eve of the 2012 election between Obama and Republican Mitt Romney, for example, Sinclair stations in several battlegrounds states aired a corporate-produced half-hour news 'special' that criticized Obama's handling of the economy, his signature health-care law and the administration's management of the terrorist attack on the U.S. consulate in Benghazi, Libya. Romney's record received less scrutiny."

Sinclair is currently forcing its stations to air the right-wing commentary of a former Trump aide named Boris Epshteyn, who displays no perceptible gifts as a commentator. (Judge for yourself.)

In another "must-air" segment, a commentator named Mark Hyman declared that "we have the greatest health care in the world" -- a statement that can be objectively disproved by comparing the U.S. with other developed nations -- and that ..."government-directed health care can kill."

Related Topic(s): Comcast; Journalism; Media Fake News; News_on_the_Internet; Sinclair Broadcast Group; Television, Add Tags
Add to My Group(s)
Go To Commenting
The views expressed herein are the sole responsibility of the author and do not necessarily reflect those of this website or its editors.