As we write this, the utterly illegitimate Immigration and Customs Enforcement (ICE) is planning another escalation, on top of the horror at the border, against immigrants without papers living within the U.S. The horror of the children screaming for their parents, and their parents not knowing where their children are but only that they are being tormented, sickened and possibly killed, will now be expanded to a whole other level. Across the sea, in Africa, Europe connives in the bombing of Africans locked down in Libyan concentration camps. 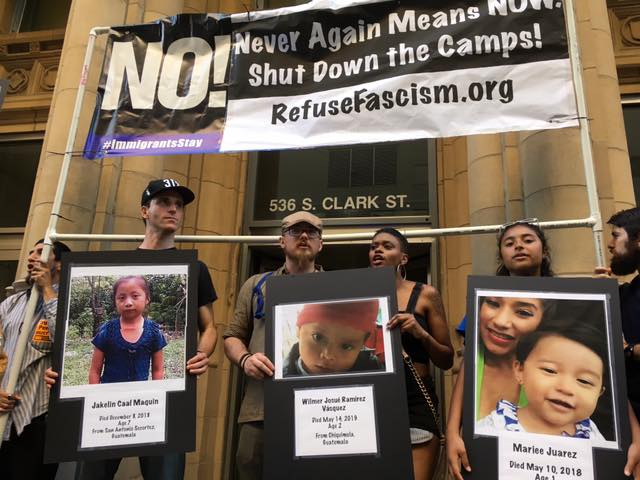 In the world we need--in the world that is actually possible--those hit by environmental and social disaster would NOT be made into pariahs, confined as if in prison and then tortured if they dare try to leave that prison. No! They would be given the aid of their fellow humans, and then made part of working to figure out how to solve the disaster. Again, the means exist to do this in this highly developed and interconnected world.

Yet what do we see instead? The ascension to power all over the world of the most repressive elements of an already oppressive system--of fascists--who make these policies even more nightmarish. If this were the plot of a science fiction movie or video game, it would be criticized for being too obvious and heavy-handed. Yet it is not fiction at all, but the reality that billions are being forced to live... and hundreds of millions are complicit in. What stands between what is actually possible and badly needed, and what is actually going on, is: THIS CAPITALIST-IMPERIALIST SYSTEM. And what we need to do--the only solution--is to get rid of this system.

Bob Avakian (BA) has said that the orientation of the revolution we need and are fighting for is that we would welcome everyone to this country who wants to build a new world. This is given substance in the Constitution for the New Socialist Republic in North America, which BA wrote. This solution and this leadership, and the road to winning this solution--must be made known to millions, and thousands organized into this, right now. The film Why We Need An Actual Revolution And How We Can Really Make Revolution--which gets into WHY a revolution is needed to get to a whole new world, free of this madness, and HOW this revolution could be successfully made--should be strongly promoted.

At the same time, and also very immediately, there is an urgent need for massive and sustained resistance to the doubling down of this outrageous offensive. The planned raids this weekend should be and must be actively resisted and anyone with a beating heart and functioning conscience should be part of that. The spirit and content of the actions taken last week--especially by those Jewish groups who put something on the line and said NEVER AGAIN--should be learned from and taken further.

Further: this badly needed resistance should and must be built as part of a fight to drive out this fascist regime, through sustained, nonviolent resistance, day after day, night after night, with the same resilience and focus now on display in Hong Kong and the Sudan.

Here it must be said that the leaders of the Democratic Party--including very prominently Chuck Schumer and Nancy Pelosi--are actively complicit in these crimes, having presided over the funding of ICE with barely any restrictions, and uniting with fascists to do so. As for the two dozen candidates mumbling out of both sides of their mouth, this is BEB--Bourgeois Electoral Bullshit! They have no answers to what is going down and still less to the horror that is looming, because they are locked within the requirements and terms of--and will defend right down to the end--the same capitalist-imperialist system that the fascists now run.

Right now is the time to wake up, to act on your convictions, and to begin pursuing them where they lead, politically and intellectually.

Right now is the time to dare.

Your humanity is at stake.

Related Topic(s): Immigration; Revolution, Add Tags
Add to My Group(s)
Go To Commenting
The views expressed herein are the sole responsibility of the author and do not necessarily reflect those of this website or its editors.