In a series of cases of shooting of civilians by policemen, the Israeli courts have apparently issued gag orders. Such gag orders are not published, and the public is left to guess their existence and scope. In recent weeks, the Israel police has launched a series of criminal investigations against protest activists for violating such unpublished gag orders by disclosing in social media posts the names of offending policemen. The use of gag orders in Israel has reached the level of "an epidemic". The US and US Jewish lobby are the main patrons of the Israeli regime and its conduct, both in Israel proper and in the occupied Palestinian territories.

Tel Aviv, July 14 - in recent days the Israel Police has taken actions against several protest activists, following the disclosure of the names of a policemen, who were involved in extreme cases of brutality. Apparently, gag orders have been issued by the courts, prohibiting the publication of the policemen's names... However, the rendering of such gag orders is not published, one usually has to guess it...

(Image by Eran Vered)   Details   DMCA
July 10, 2021, Eran Vered: " The court issued a gag order, prohibiting us from telling the serious deeds of scum of mankind, policeman Abed Naarani ... in the service of the No 1 crime organization in Israel. We are (still) permitted to share this video and write that it documents filthy Abed Naarani, while he is perpetrating much less serious deeds than the incident that we are prohibited from speaking of".

One of these activists, Eran Vered, was arrested on June 29, 2021, in what appeared to be a high stakes police operation. Vered was ambushed and detained by plain-clothed police, while leaving the Tel Aviv train station, apparently he was positioned through his cell phone. [i] The cause of the detention was three (3) Facebook posts, where he spelled out names, which were under gag orders: The name of the policeman who shot in the back and seriously wounded 16 year old Palestinian Jena Kissawi in Sheikh Jarrah in May 2021, [ii] the name of the policeman who shot to death Ethiopian-Jewish black teen Solomon Teka in June 2019 , [iii] and the name of the IDF 8200 unit intelligence officer who died in military prison in May 2021. [iv]

The names have been widely published in social networks, and the action taken in this case against protest activists has been described as vengeful. 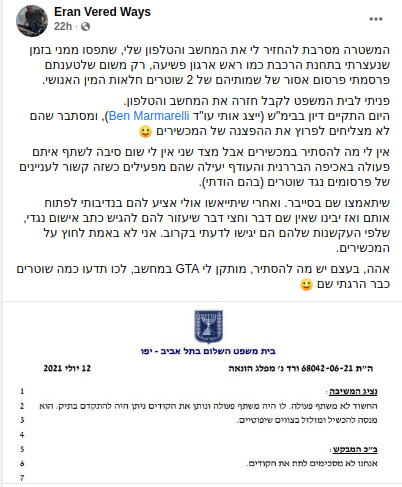 July 12, 2021, Eran Vered: " Police refuses to return my computer and my cell phone, which they seized while I was detained at the train station like a head of a crime organization, only because they claim that I published the names of two policemen, scum of humankind. I went to court to seek the return of my phone and my computer. In court hearing today ... it turned out that they couldn't unlock my devices , due to encryption (smiley)..."... Attached to the post is a copy of the court protocol of the hearing, where police counsel argues: "The suspect is not cooperating. Had he cooperated and provided us with his codes, we could proceed. He is trying to undermine us and shows contempt for judicial decisions". Vered's counsel argues: "We do not agree to provide the codes". Click Here

The Jerusalem protests provide unique insights. The continuous protests by Jews near the official residence of prime minister Netanyahu, were widely credited for toppling the Netanyahu government. Police exerted unusual brutality towards protesters, unsuccessfully trying to supress the peaceful protests, which often took the character of a carnival. Over the months long protests, several policemen were notable for their brutality and gained widespread publicity. Policeman Abed Naarani was one of them. [v] A media report described him as:" Police pit bull: The policeman who has become the scare of protesters ... one who uses exceptional brutality. Testimonies have accumulated against Abed Naarani, which describe elbows to the face, unnecessary fondling and surprise fist punches" . But in the demonstrations by Jews against Netanyahu, neither was tear gas used, nor was anyone ever shot...

His work won appreciation in Israel and abroad: * Prof Uzzi Ornan - "All power to you! I hope that you see your tremendous efforts (more...)
Related Topic(s): Free Speech Online; Israel And Palestine; Police Brutality, Add Tags
Add to My Group(s)
Go To Commenting
The views expressed herein are the sole responsibility of the author and do not necessarily reflect those of this website or its editors.