In what appears to be a sea change in Israeli mentality, the public is refusing to accept government far-reaching censorship and lies in this case.

Tel-Aviv, June 7 - late evening yesterday, Israeli Department of Justice filed a motion for an urgent court hearing this morning, to approve an expanded "paraphrase", pertaining to the death of a "suicide intelligence officer". [i] "Paraphrase" is the Israeli legal term for court-approved short public version of sealed information. The news item still adhered to the heavy censorship state narrative - not mentioning the officer's name and referring to him as "suicide".

Also last night, IDF spokesman issued a notice that its approach in this matter had changed... and it had been decided to engage in "full transparency in the intelligence officer's case... except for the core security-intelligence secret"... [ii]

Furthermore, last night protest was announced on social media for this evening (Monday) in front of IDF headquarters in Tel-Aviv, calling for transparency in the death of Captain Tomer Eiges. Here, the officer's name was spelled out, and the state narrative of "suicide" was rejected. Such protest is unprecedented in Israel.

The affair was first vaguely reported on on May 18, during the latest cycle of war in Gaza, but went unnoticed. 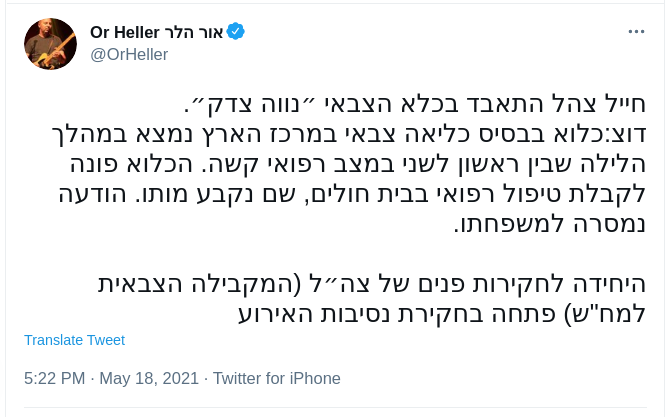 (Image by Or Heller)   Details   DMCA

May 18, 2021, military reporter Or Heller: "IDF soldier committed suicide in "Neveh Tzedek" military prison. IDF Spokesman: A detainee in a military prison in the center district was found in serious medical condition in the night between Sunday and Monday [May 16-17 -jz]. The detainee was rushed for medical care in a hospital, where he was pronounced dead. Notice was given to the family. IDF Internal Investigation Unit has initiated an investigation."

The case got traction only over the past week, starting with a series of sketchy, heavily censored reports in Haaretz daily in Israel. [iii] As is often the case under such circumstances, US blogger Richard Silverstein (Tikun Olam) followed in tandem with the censored information, starting on the very same day, providing the name and photo of Tomer Eiges. [ivv]

June 02, 2021, Haaretz reporter Yaniv Kubovich: "Far-reaching gag orders should better disappear from this world. It is possible and necessary to keep a secret. It is impossible to hide the entire reality surrounding it. 'Intelligence officer, who was detained and died under gag ordered circumstances was buried in a civilian grave and would not be recognized as an IDF casualty.'" The picture is of the military prison, in which the unnamed officer died.

His work won appreciation in Israel and abroad: * Prof Uzzi Ornan - "All power to you! I hope that you see your tremendous efforts (more...)
Related Topic(s): Cybersecurity; Israel; Military Corruption, Add Tags
Add to My Group(s)
Go To Commenting
The views expressed herein are the sole responsibility of the author and do not necessarily reflect those of this website or its editors.