By reaffirming the Panmunjom Declaration, the US President has committed to bringing its military back from South Korea and thus a complete denuclearization of the South as well as the North. 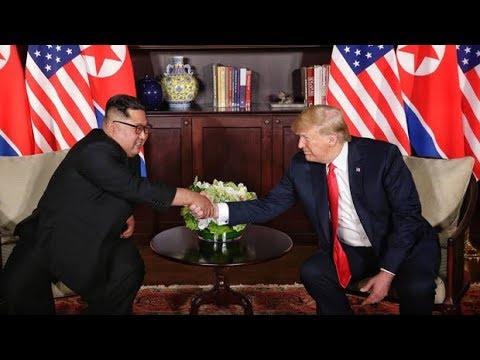 The Trump-Kim geopolitical reality-TV show -- surreal for some -- offered unparalleled entries to the annals of international diplomacy. It will be tough to upstage the US President pulling an iPad and showing Kim Jong-un the cheesy trailer of a straight-to-video 1980s B-grade action movie -- complete with a Sylvester Stallone cameo -- casting the two leaders as heroes destined to save the world's 7 billion people.

Away from the TV, the former "Rocket Man," now respectfully recast in Trump terminology as "Chairman Kim," did strike a formidable coup by completely erasing the dreaded acronym CVID -- or "complete, verifiable, irreversible denuclearization" -- from the final text of the Singapore joint statement.

Throughout the pre-summit negotiations, the Democratic People's Republic of Korea (DPRK) had always stressed an "action-for-action" strategy leading to denuclearization, as in Pyongyang being compensated every step of the way instead of waiting until after complete denuclearization -- a process that could last over a decade -- to be eligible for economic benefits.

The Singapore joint statement enshrines exactly what the Russia-China strategic partnership -- formalized in the recent Shanghai Cooperation Organization (SCO) summit -- was suggesting from the beginning: a double freeze.

The DPRK holds off on any new nuclear and missile tests while the US and South Korea stop the "war games" (Trump's terminology).

This logical sequence of the Sino-Russian roadmap is based on what South Korean President Moon Jae-in agreed with Kim Jong-un at the inter-Korean summit last April. And that ties in with what North Korea, South Korea and Russia had already discussed at the Far East summit in Vladivostok last September, as Asia Times reported; economic integration between Russia and the two Koreas, including the crucial connectivity of a future Trans-Korean railway with the Trans-Siberian.

Once again, this is all about Eurasia integration; increased trade between North Korea and Northeast China, concerning mostly Liaoning, Jilin and Heilongjiang provinces; and total, physical connectivity of both Koreas to the Eurasian heartland.

That's yet another instance of the New Silk Roads, or Belt and Road Initiative (BRI) meeting the Eurasia Economic Union (EAEU). And not by accident South Korea wants to connect deeper with both BRI and the EAEU.

When in doubt, re-read Panmunjom

The Singapore joint statement is not a deal; it's a statement. The absolutely key item is number 3: "Reaffirming the April 27, 2018, Panmunjom Declaration, the DPRK commits to work toward the complete denuclearization of the Korean Peninsula."

This means that the US and North Korea will work towards denuclearization not only in what concerns the DPRK but the whole Korean Peninsula.

Much more than "...the DPRK commits to work toward the complete denuclearization of the Korean Peninsula," the keywords are in fact "reaffirming the April 27, 2018, Panmunjom Declaration..."

Even before Singapore, everyone knew the DPRK would not "de-nuke" (Trump terminology) for nothing, especially when promised just some vague US "guarantees."

Predictably, both US neocon and humanitarian imperialist factions are unanimous in their fury, blasting the absence of "meat" in the joint statement. In fact there's plenty of meat. Singapore reaffirms the Panmunjom Declaration, which is a deal between North Korea and South Korea.

Related Topic(s): Denuclearization; Donald Trump; Dprk; International; Kim Jong-un; Negotiation; Singapore Meeting, Add Tags
Add to My Group(s)
Go To Commenting
The views expressed herein are the sole responsibility of the author and do not necessarily reflect those of this website or its editors.