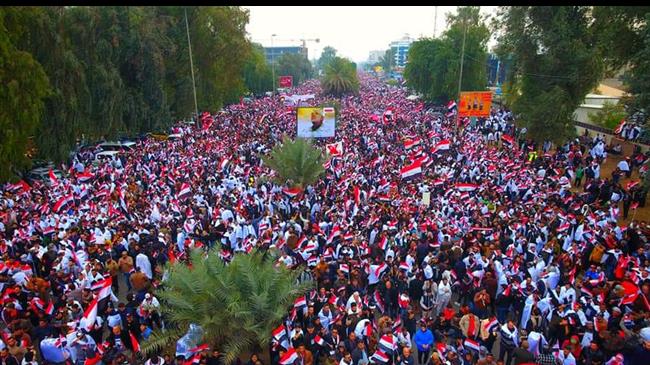 Iraqi people gather in the capital Baghdad for a 'million-strong' march to demand an end to the presence of US forces in their country.
(Image by Video Screenshot, Press TV.)   Details   DMCA

The world is saying no to war with Iran and US out of the Middle East. Hundreds of protests were held in the United States and around the world on Saturday with a unified voice of "No War." These protests are in solidarity with massive protests in Iraq calling for the US to get out where it is now an occupying force as the government has asked it to leave.

These protests and the uprising over the US remaining in Iraq are not being covered in the US corporate media. Millions of people participated in the memorials for General Soleimani and Abu Mahdi al-Muhandes after the US assassinated them. Now, millions have protested the refusal of the US to leave Iraq. The Pentagon knows the reality is that US troops in Iraq are at increasing risk every day the US stays in that sovereign nation.

The warnings have been sent. i24 News reports that up to five missiles struck near the US Embassy in Baghdad today. "Sunday's attack was the second night in a row that the Green Zone was hit and the 15th time over the last two months that US installations have been targeted."

Telesur reports, "According to estimates of the Iraqi police commander Jaafar Al-Batat, over 1 million people Thursday demanded the departure of U.S. troops from Iraq with a march in Baghdad, which was convened by cleric Muqtada Al-Sadr three weeks after the murder of Iran's General Qasem Soleimani."

Kevin Zeese is co-chair of Come Home America, www.ComeHomeAmerica.US which seeks to end U.S. militarism and empire. He is also co-director of Its Our Economy, www.ItsOurEconomy.US which seeks to democratize the economy and give people greater (more...)
Related Topic(s): China; Iran; Iraq; Middle East Wars; Pentagon; Protest; Sanctions; Soleimani; Trump; World Issues; (more...) World War Three, Add Tags  (less...)
Add to My Group(s)
Go To Commenting
The views expressed herein are the sole responsibility of the author and do not necessarily reflect those of this website or its editors.