DISCLAIMER: This essay is entirely the work of satirist and self-appointed political pundit, CJ Hopkins, and does not reflect the views and opinions of the Consent Factory, Inc., its staff, or any of its agents, subsidiaries, or assigns. 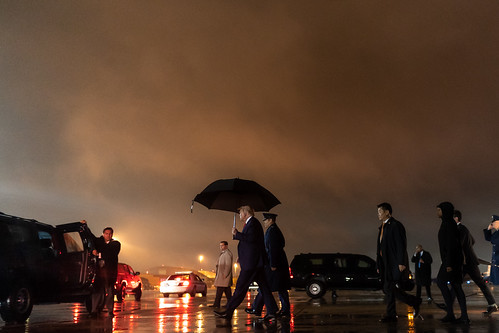 President Trump Returns to the White House
(Image by The White House)   Details   DMCA
The War on Populism: The Final Act

So, it appears the War on Populism is building toward an exciting climax. All the proper pieces are in place for a Class-A GloboCap color revolution, and maybe even civil war. You got your unauthorized Putin-Nazi president, your imaginary apocalyptic pandemic, your violent identitarian civil unrest, your heavily-armed politically-polarized populace, your ominous rumblings from military quarters " you couldn't really ask for much more.

OK, the plot is pretty obvious by now (as it is in all big-budget action spectacles, which is essentially what color revolutions are), but that won't spoil our viewing experience. The fun isn't in guessing what is going to happen. Everybody knows what's going to happen. The fun is in watching Bruce, or Sigourney, or "the moderate rebels," or the GloboCap "Resistance," take down the monster, or the terrorists, or Hitler, and save the world, or democracy, or whatever.

The show-runners at GloboCap understand this, and they are sticking to the classic Act III formula (i.e., the one they teach in all those scriptwriting seminars, which, full disclosure, I teach a few of those). They've been running the War on Populism by the numbers since the very beginning. I'm going to break that down in just a moment, act by act, plot point by plot point, but, first, let's quickly cover the basics.

The first thing every big Hollywood action picture (or GloboCap color revolution) needs is a solid logline to build the plot around. The logline shows us: (1) our protagonist, (2) what our protagonist is trying to do, and (3) our antagonist or antagonistic force.

For example, here's one everyone will recognize:

"A computer hacker learns from mysterious rebels about the true nature of his reality and his role in the war against its controllers."

In our case, the logline writes itself:

"After America is taken over by a Russian-backed Hitlerian dictator, the forces of democracy unite to depose the tyrant and save the free world."

Donald Trump is our antagonist, of course. And what an antagonist he has been! As the deep-state spooks and the corporate media have been relentlessly repeating for the last four years, the man is both a Russian-backed traitor and literally the resurrection of Hitler! In terms of baddies, it doesn't get any better.

It goes without saying that our protagonist is GloboCap (i.e., the global capitalist empire), or "democracy," as it is known in the entertainment business.

Now, we're in the middle of Act III already, and, as in every big-budget action movie, our protagonist suffered a series of mounting losses all throughout Act II, and the baddie was mostly driving the action. Now it's time for the Final Push, but, before all the action gets underway, here's a quick recap of those previous acts. Ready? All right, here we go "

***If, for whatever inexplicable reason, you appreciate Mr. Hopkins' work and would like to support it, please go to his Patreon page  (where you can contribute as little $1 per month), or send your contribution to his PayPal account , so that maybe he'll stop coming around our offices trying to hit our staff up for money. Alternatively, you could purchase his satirical dystopian novel,  (more...)
Related Topic(s): Election; Trump, Add Tags
Add to My Group(s)
Go To Commenting
The views expressed herein are the sole responsibility of the author and do not necessarily reflect those of this website or its editors.