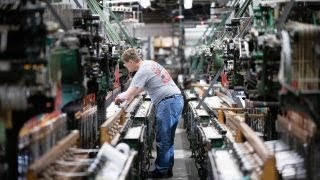 Americans are not happy, and for good reason: They continue to suffer financial stress caused by decades of flat income. And every time they make the slightest peep of complaint about a system rigged against them, the rich and powerful tell them to shut up because it is all their fault.

One percenters instruct them to work harder, pull themselves up by their bootstraps and stop bellyaching. Just get a second college degree, a second skill, a second job. Just send the spouse to work, downsize, take a staycation instead of a real vacation. Or don't take one at all, just work harder and longer and better.

The barrage of blaming has persuaded; workers believe they deserve censure. And that's a big part of the reason they're unhappy. If only, they think, they could work harder and longer and better, they would get ahead. They bear the shame. They don't blame the system: the Supreme Court, the Congress, the president. And yet, it is the system, the American system, that has conspired to crush them.

Yeah, yeah, yeah, unemployment is low and the stock market is high. But skyrocketing stocks benefit only the top 10 percent of wealthy Americans who own 84 percent of stocks. And while more people are employed now than during the Great Recession, the vast majority of Americans haven't had a real raise since 1979.

It's bad out there for American workers. Last month, their ranking dropped for the third year running in the World Happiness Report, produced by the Sustainable Development Solutions Network, a UN initiative.

These sad statistics reinforce those in a report released two years ago by two university professors. Reviewing data from the General Social Survey, administered routinely nationally, the professors found Americans' assessment of their own happiness and family finances has, unambiguously, declined in recent years.

But if Americans would just work harder, everything would be dandy, right?

No. Not right. Americans work really, really hard. A third of Americans work a side hustle, driving an Uber or selling crafts on Etsy. American workers take fewer vacation days. They get 14, but typically take only 10. The highest number of workers in five years report they don't expect to take a vacation at all this year. And Americans work longer hours than their counterparts in other countries.

Americans labor 137 more hours per year than Japanese workers, 260 more than Brits, and 499 more than the French, according to the International Labor Organization.

And the longer hours aren't because American workers are laggards on the job. They're very productive. The U.S. Bureau of Labor Statistics calculates that the average American worker's productivity has increased 400 percent since 1950.

If pay had kept pace with productivity, as it did in the three decades after the end of World War II, American workers would be making 400 percent more. But they're not. Their wages have flatlined for four decades, adjusting for inflation.

That means stress. Forty percent of workers say they don't have $400 for an unexpected expense. Twenty percent can't pay all of their monthly bills. More than a quarter of adults skipped needed medical care last year because they couldn't afford it. A quarter of adults have no retirement savings.

If only Americans would work harder. And longer. And better.

Despite right-wing attempts to pound that into Americans' heads, it's not the solution. Americans clearly are working harder and longer and better. The solution is to change the system, which is stacked against workers.

Related Topic(s): Corporations; Economy; Stress; Trump Tax-cut Scam; Work; Workers, Add Tags
Add to My Group(s)
Go To Commenting
The views expressed herein are the sole responsibility of the author and do not necessarily reflect those of this website or its editors.