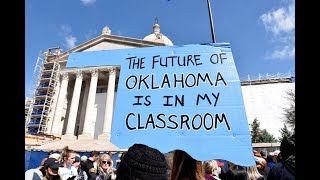 When coal-mine bosses said mules were more precious than men because dead miners could be replaced for free, but not dead mules, it demonstrated disrespect. That contempt from the top provoked pitched gun battles between workers and mine-owner militias in West Virginia a little over a century ago.

Ill-paid, mistreated and insulted, what did the miners have to lose?

The same was true for sanitation workers in Memphis, Tenn., half a century later. Subjected to dangerous equipment that killed four workers in four years and paid so little they qualified for food stamps, more than 1,300 walked off the job on Feb. 12, 1968. They demanded respect, carrying signs stating, "I am a man." The day after Dr. Martin Luther King marched to support these workers, he was assassinated in Memphis.

Now, a half century later, GOP politicians have so denigrated public school teachers that the educators in three states have engaged in wildcat strikes, mobbing their capitol buildings and demanding improved school funding for students and better pay and benefits for themselves and other workers.

Teachers in West Virginia, Oklahoma and Kentucky, like the 1920s West Virginia coal miners, had nothing to lose. Educators in Arizona, who began demonstrating at their capitol last week, may walk out soon as well.

What these states have in common is Republican control and union suppression. All are states that forbid labor organizations from charging workers who choose not to join the union fair share payments to cover the costs of collective bargaining. This, of course, weakens unions, which are required by federal law to represent workers who don't join and don't contribute. Some states, like West Virginia, go even further, outlawing teacher strikes.

The U.S. Supreme Court is deliberating a case, Janus vs. AFSCME, that is likely to end with a decision prohibiting collection of fair-share fees by every public sector union in the country. That will weaken all of them. In the end, such a decision from the Supreme Court may inflame more labor unrest and wildcat strikes. The 1935 National Labor Relations Act, passed by a Democratic-controlled Congress and signed by a Democratic President, was intended to facilitate labor organizing because lawmakers believed that would reduce strikes and increase labor peace.

Republicans have worked every day since then to weaken the law, with the Janus case just the latest iteration. By undermining organized labor and empowering employers, Republicans have incited labor strife.

Parents, communities and educators in West Virginia, Oklahoma, Kentucky and Arizona know that tax-cutting, labor-hating Republican politicians are to blame for the school disruptions.

Of course, teachers don't live in mine company-owned shacks or get paid in company script that can be used only in company stores.

But for 2018, the conditions in which these educators find themselves are deplorable.

These are professionals with four-year college degrees and teaching certifications. They adore their students, as illustrated by Marjory Stoneman Douglas High School geography teacher Scott Beigel, 35, who opened the door of his classroom to get a group of students to safety during the mass shooting there Feb. 14, but then was shot to death as he attempted to relock the door.

These four states are among the lowest-paying in the nation. West Virginia was 45th when it granted striking teachers a 5 percent raise in February. Oklahoma is dead last. These teachers struggle to meet their college loan obligations, make car payments and cover the mortgage.

Related Topic(s): Education; Funding; Republican; Schools; Strike; Students; Teachers Unions, Add Tags
Add to My Group(s)
Go To Commenting
The views expressed herein are the sole responsibility of the author and do not necessarily reflect those of this website or its editors.