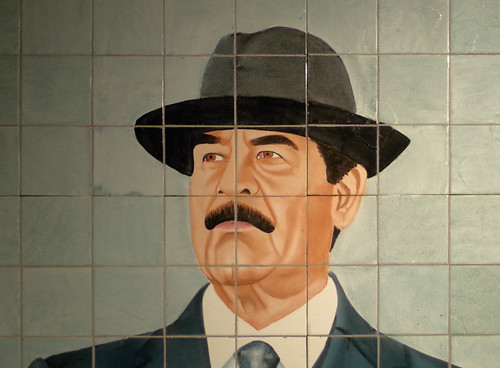 The US Government protection of the Arabs Persian Gulf countries led to the Gulf War of 1990 to liberate the Kingdom of Kuwait from Saddam Hussein of Iraq occupation.

'The Gulf War (2 August 1990 -- 28 February 1991), codenamed Operation Desert Shield (2 August 1990 -- 17 January 1991) for operations leading to the buildup of troops and defense of Saudi Arabia and Operation Desert Storm (17 January 1991 -- 28 February 1991) in its combat phase, was a war waged by coalition forces from 35 nations led by the United States against Iraq in response to Iraq's invasion and annexation of Kuwait.'

One month into the first Gulf War, in February 1991, President George H.W. Bush called on the Iraqi people to stage a coup. He asked them 'to take matters into their own hands and force Saddam Hussein, the dictator, to step aside.'

The 1991 uprisings in Iraq were a series of popular rebellions in northern and southern Iraq in March and April 1991 in a cease-fire of the Persian Gulf War. The mostly uncoordinated insurgency often referred to as the Sha'aban Intifada among Arabs and as the National Uprising among Kurds.

More than two million Kurds moved to Iran and Turkey because of the US Government betrayal. Under public pressure, President George H.W. Bush and the US Congress committed to protecting Kurds of Northern Iraq.

Kurdish people are hungry and revolting now in last two days. The mafia forces of Barzani and Talabani are killing hungry Kurdish civilian now. The question is, where is the US Government protection of Kurds?

Related Topic(s): Business; Iraq; Oil; Oil; People; People GHW Bush, Add Tags
Add to My Group(s)
Go To Commenting
The views expressed herein are the sole responsibility of the author and do not necessarily reflect those of this website or its editors.