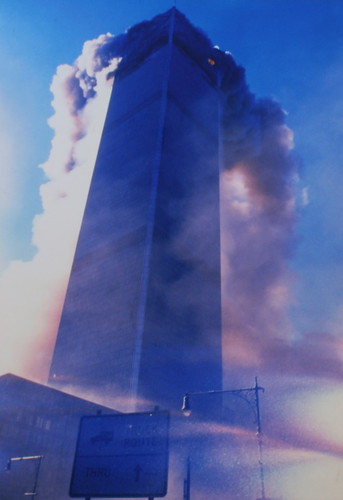 World Trade Center building on 9/11 prior to its collapse

Tomorrow marks the 15th anniversary of 9/11.

As we know it's led to the global war on terror, endless war, occupations, the "unitary" executive where by anything the president does is made "legal" by Justice Department memos but kept secret for reasons of national security, indefinite detention under the cover of the NDAA (National Defense Authorization Act) that gives the president the sole right to detain anyone indefinitely-including American citizens-until the end of hostilities (essentially forever), extraordinary rendition, NSA surveillance of all electronic communications, to recite just a few of the terrible consequences brought about since that fateful day.

I recommend two timely articles, one by John W. Whitehead titled, "The Tyranny of 9/11, The Building Blocks of the American Police State A-Z" [1] and the other by Paul Craig Roberts titled, "The Tide is Turning, The Official Story is Now The Conspiracy Theory" [2] . These articles not only challenge the "official" story of that day but also what has happened to our so called "democracy" ever since. These are must reads. That is if one chooses to face reality, not retreat into a state of amnesia or become ostrich like keeping ones head in the ground because it's all too terrible to assimilate-which is just what the "deep state" wants the people to do.

Unless "we the people" come face to face with this reality there is no way we can change it.

We must see "official" government pronouncements- then regurgitated ad nauseam by the corporate MSM as unassailable truth- as simply propaganda meant to deceive us, particularly after some domestic act of terrorism -real or false flag-to make us fearful, demand the government protect us.

Of course all challenges to the "conventional wisdom" is ridiculed as conspiracy theory, from kooks, frauds, haters of America, radicals, anarchists all to make them seem fools to be dismissed out of hand.

This false idea, " Well I haven't done anything wrong so I don't have anything to worry about", say dismissing the NSA's data mining surveillance of all electronic messages is essentially ceding away your 4th Amendment right against "unreasonable searches and seizures" by the government.

Now lately, the seeming obsession with the Smartphone provides what appears to be the perfect distraction. How about distracted from the sinister machinations the government pursues domestically and all over the world?

Whether these devices were intentionally developed as the perfect distraction is hard to determine but from all public visual accounts it seems to be the case.

Add to this "witches brew" the current presidential extravaganza, the current ongoing distraction between the "Hilleartor" Hillary Clinton and the "Donald" Trump whose outcome won't change anything, just a continuation of the same.

The government and its complicit enablers in the corporate MSM abetted by the financial/ security/surveillance/military/industrial/political complex "deep state" is doing everything to make us passively indifferent, insouciant and from all appearances seems to be "successful" in a Machiavellian way.

But there are "stirrings" of conscious awareness both here and abroad-"Occupy", the initial "Arab Spring", the recent "Bernie" campaign exposing much of the rot, the British "Brexit", the earlier-though failed- Greek referendum for "Grexit" rejecting austerity and debt peonage, apparent rejection of the TTIP and TPP trade measures that would have governments cede their sovereignty to corporations, rejection of the Keystone XL pipeline, resistance to fracking by local communities nationally, now the ongoing protest and encampment at the Sacred Stones Camp at Standing Rock, North Dakota where indigenous native Americans from 80 tribes and supporters are camped out against the Dakota Pipeline for desecrating ancient burial sites of the Sioux nation on land that was granted to them by treaty in 1851-all this and other resistance against the reign of the 1%, their neo-liberalism, neo-colonialism, austerity and debt peonage and hegemony over the rest of us.

Meanwhile internationally Russia and China are provoked, Russia with NATO expanding to its borders and China in the South China Sea with the US ruse of protecting "freedom of navigation"-something China has never interfered with. Now close allies militarily but preferring economic development they present a formidable challenge to US imperialism.

Retired. The author of "DECEIT AND EXCESS IN AMERICA, HOW THE MONEYED INTERESTS HAVE STOLEN AMERICA AND HOW WE CAN GET IT BACK", Authorhouse, 2009
Related Topic(s): Democracy; Freedom; Government; Truth; Tyranny, Add Tags
Add to My Group(s)
Go To Commenting
The views expressed herein are the sole responsibility of the author and do not necessarily reflect those of this website or its editors.