Giuliani seems to think that President Trump is above the law. 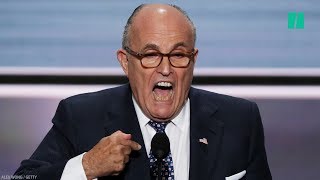 What Rudy Giuliani said in his two-day "media blitz" on behalf of his new client was so bizarre that even the client, Donald Trump, observed Friday that his lawyer "wasn't totally familiar with everything."

But the truly troublesome statement from Giuliani was one that Trump made no effort to walk back -- and that undoubtedly influenced Trump's talk about how his new lawyer is "a special guy" who "really understands that this is a witch hunt." During what Sean Hannity referred to as the "really important" part of his astounding interview with the former mayor of New York, the Fox News host griped about special counsel Robert Mueller's probe and "many congressional investigations" as he turned the discussion toward the prospect that the president might be subpoenaed.

"It's pretty clear that a president can't be subpoenaed to a criminal proceeding about him. Now, why is that? And fortunately -- or maybe unfortunately -- we have the real life circumstance going on that the Founding Fathers thought about, which is a president cannot be distracted by a criminal investigation. You can always prosecute him after. They can get him when he leaves the White House. You can always prosecute him after."

Giuliani was asserting that the intent of the founders was that presidents not be distracted by the rule of law. Arguing that the president has a defined authority to refuse to respond to demands from Mueller or others who are investigating wrongdoing, Giuliani theatrically declared that: "I could not go to the president and say, take two days off to get ready for that and screw the whole thing with North Korea. I -- how can any American do that?"

Related Topic(s): Donald Trump; Giuliani Rudy; Impeachment; Judiciary; Subpoena, Add Tags
Add to My Group(s)
Go To Commenting
The views expressed herein are the sole responsibility of the author and do not necessarily reflect those of this website or its editors.