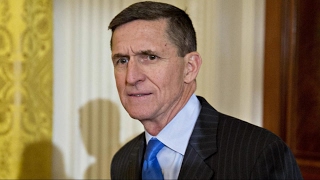 Michael Flynn
(Image by YouTube, Channel: ABC News)   Details   DMCA
The tawdry Michael Flynn soap opera boils down to the CIA hemorrhaging leaks to the company town newspaper, leading to the desired endgame: a resounding victory for hardcore neocon/neoliberalcon US Deep State factions in one particular battle. But the war is not over; in fact it's just beginning.

Even before Flynn's fall, Russian analysts had been avidly discussing whether President Trump is the new Viktor Yanukovych -- who failed to stop a color revolution at his doorstep. The Made in USA color revolution by the axis of Deep State neocons, Democratic neoliberalcons and corporate media will be pursued, relentlessly, 24/7. But more than Yanukovych, Trump might actually be remixing Little Helmsman Deng Xiaoping: "crossing the river while feeling the stones." Rather, crossing the swamp while feeling the crocs.

Flynn out may be interpreted as a Trump tactical retreat. After all, Flynn may be back -- in the shade, much as Roger Stone. If current deputy national security adviser K T McFarland gets the top job -- which is what powerful Trump backers are aiming at -- the shadow-play Kissinger balance of power, in its 21st century remix, is even strengthened; after all McFarland is a Kissinger asset.

Flynn worked with Special Forces; was head of the Defense Intelligence Agency (DIA); handled highly classified top secret information 24/7. He obviously knew all his conversations on an open, unsecure line were monitored. So he had to have morphed into a compound incarnation of the Three Stooges had he positioned himself to be blackmailed by Moscow.

What Flynn and Russian ambassador Sergey Kislyak certainly discussed was cooperation in the fight against ISIS/ISIL/Daesh, and what Moscow might expect in return: the lifting of sanctions. US corporate media didn't even flinch when US intel admitted they have a transcript of the multiple phone calls between Flynn and Kislyak. So why not release them? Imagine the inter-galactic scandal if these calls were about Russian intel monitoring the US ambassador in Moscow.

No one paid attention to the two key passages conveniently buried in the middle of this US corporate media story. 1) "The intelligence official said there had been no finding inside the government that Flynn did anything illegal." 2) "...the situation became unsustainable -- not because of any issue of being compromised by Russia -- but because he [Flynn] has lied to the president and the vice president."

Recap: nothing illegal; and Flynn not compromised by Russia. The "crime" -- according to Deep State factions: talking to a Russian diplomat.

Vice-President Mike Pence is a key piece in the puzzle; after all his major role is as insider guarantor -- at the heart of the Trump administration -- of neocon Deep State interests. The CIA did leak. The CIA most certainly has been spying on all Trump operatives. Flynn though fell on his own sword. Classic hubris; his fatal mistake was to strategize by himself -- even before he became national security adviser. "Mad Dog" Mattis, T. Rex Tillerson -- both, by the way, very close to Kissinger -- and most of all Pence did not like it one bit once they were informed.

A "man of very limited abilities"

Flynn was already compromised by his embarrassingly misinformed book co-written with neocon Michael Ledeen, as well as his juvenile Iranophobia. At the same time, Flynn was the point man to what would have been a real game-changer; to place the CIA and the Joint Chiefs of Staff under White House control.

A highly informed US source I previously called "X," who detailed to Sputnik how the Trump presidency will play out, is adamant "this decision makes Trump look independent. It is all going according to script."

"X" stresses how "the NSA can penetrate any telephone system in the world that is not secure. Flynn was a man of very limited abilities who talked too much. You never hear from the real powers in intelligence nor do you know their names. You can see that in Flynn's approach to Iran. He was disrupting a peace deal in the Middle East relating to Russia, Iran and Turkey in Syria. So he had to go."

Related Topic(s): Backlash; Iran; Michael Flynn; Neocons; Yanukovych, Add Tags
Add to My Group(s)
Go To Commenting
The views expressed herein are the sole responsibility of the author and do not necessarily reflect those of this website or its editors.