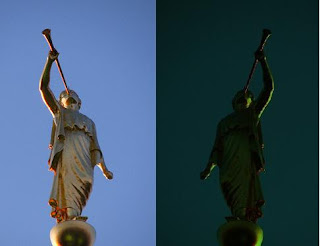 Whenever a "person of faith" (not a phrase I would normally use) follows their human conscience while going against the actual doctrines of their church, most people rush to say "See, we're (they're) not all like that!" I usually go another route: "See, some of them ARE like that!" It's my contrary nature and I know that it's unpleasant, but I allow it to take hold once in a while. Luckily, there are days when BOTH conscience and doctrine crop up so that I can present them more clearly.

Today has been one such day.

Today the Mormon Church was found guilty of 13 counts of failing to report campaign staff contributions by the Fair Political Practices Commission. They were fined approximately $5,000.

Today a story in Religion Dispatches told the tragic story of a soldier who defied a Mormon precept, followed her basic beliefs and paid for her guilt ...with her life.

The story about The Church Of Jesus Christ of Latter Day Saints failing to properly report staff contributions has been going on for over 19 months. It might seem like a paltry situation, but there is nothing paltry about the fact that the FPPC nailed the Mormon Church. While the amount of the fine is certainly minuscule - especially since there were actually million$ involved (40+) - and perhaps we will never know the scope of their campaign to derail same-sex marriage in California, but the outcome of the suit puts the Mormon Church in the worst possible light and, in fact, warns future propositions in other states to monitor exactly where the money is coming from.

"The Mormon church has been leading the charge to create constitutional amendments to take away marriage equality from gay and lesbian people all over this country and they've been doing it dishonestly and in the dark of night," said Mr. Karger, who referred to the situation as "Mormon-gate" when reached by phone. "I blew the whistle and they got caught for violating the law," he said.

Doubtless all of those Mormons who gave millions, who volunteered, who worked tirelessly to press California voters to support "family values" thought that they were doing the work of the Church and of God. The hold the church had over them was complete, but they didn't feel compromised in any way. To them, it's simple: The Church = morality and the only way to live. Never question the Church's reasons. Never question its authority over every aspect of life.

Of course, we see that kind of blind obedience in many churches today, but never to such an extent as was seen that campaign season. Millions of dollars were donated sub rosa as if under cover of darkness: no one should know the extent of their work, the cost of their work, the sacrifices to their work.

The tragedy of Alyssa Peterson

Alyssa Peterson originally joined the Army as an Arabic language specialist. By the age of 27, she had served as a Mormon missionary in the Netherlands and was familiar with other cultures outside the U.S. She was assigned to Tal Afar, Iraq as a counter-intelligence interrogator. She was, of course, commanded to apply "enhanced interrogation techniques" - techniques she thought were torture.

She refused. Peterson was then labeled a "detainee empathizer" and assigned to another unit.

Three days later, Alyssa Peterson was dead from a self-inflicted shot from her service rifle. Her devout Mormon upbringing, that sometimes conflicting foundation of nationalism and morality was her undoing.

The Church of Jesus Christ of Latter-day Saints stresses to members the importance of respecting established governments and laws of the nations where they live. American Mormons have traditionally been an especially nationalistic group, stressing our loyalty to the United States government even at times in our history when that government has failed to protect our lives and our interests.

Rev. Dan Vojir is has been writing/blogging on religion and politics for the better part of ten years. A former radio talk show host (Strictly Books " Talk America Radio Network) and book publisher, Dan has connected with some of the most (more...)
Related Topic(s): Church-State Theocracy; Churches-Violence; Mormon Church Of Latter Day Saints; Nationalism; Roman Catholic Church; Torture, Add Tags
Add to My Group(s)
Go To Commenting
The views expressed herein are the sole responsibility of the author and do not necessarily reflect those of this website or its editors.