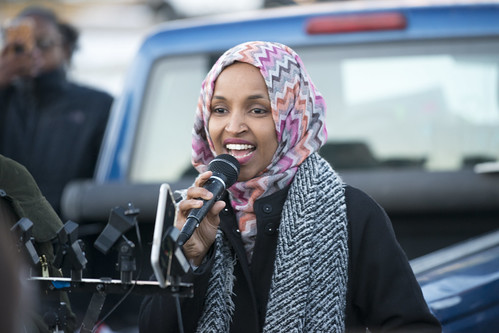 Democrats have gone all atwitter (pun intended), scattering ruffled feathers all over the barnyard as if a fox were after them when the only serious threat to their blinkered preconceptions comes from a bird of different plumage. Not all Democrats are squawking like chickens with their heads cut off (as it were), but enough of the older, backward-looking birds are making enough noise to make the whole party look idiotic.

In plainer language, the Democratic Party remains in the grip of white privilege, which can only be a losing position in a country where there's no effective challenge to Trump for the white supremacy vote. Want proof? Nominate Biden. But that's only a prediction. What's going on right now in the House of Representatives is reprehensible enough as reflexive ideologues swarm to block the smallest whiff of any fresh air.

The demonization of Rep. Ilhan Omar is a hari-kari move for the party, led by people dug in against almost any real change, doing as little as possible about all the actual crises. Demonizing a forthright congresswoman from Minnesota, who came to this country as a 12-year-old refugee from Somalia, is reactionary, mindless, unjustified and fundamentally stupid. Stupid? Yes, stupid, because it helps Republicans inflame division among Democrats with no offsetting gain. The American role in Somalia has been destructive for decades, but who's thinking about apologizing for that?

As this is written, the state of play is that a minority of old-line Democrats want a nonbinding resolution condemning anti-Semitism, but only their figment of anti-Semitism as imagined in a handful of remarks by Ilhan Omar. There has been enough pushback from others in the party that there's no agreement on whether the resolution might also condemn Islamaphobia. So far, no one's much suggesting adding any of the many other bigotries to the resolution, which is pretty weird if you stop to think about it. Basically, the resolution pretends to be all about anti-Semitism, which is abhorrent, but the overall reaction kind of illustrates Ilhan Omar's point in the first place: it's all about Israel.

Or more to the point, it's all about saying nothing bad about Israel, which is straightforward political censorship. Coming in the wake of the UN Human Rights Council report that Israeli soldiers likely committed war crimes by killing 189 unarmed civilians in Gaza during 2018, the freakout over Ilhan Omar looks like a very convenient and cynical distraction.

So what is the case against Ilhan Omar? There are a variety of alleged "smoking guns" claimed against Omar, all of which, on close examination, shoot blanks. The one that touched off the current rush to misjudgment was a short, simple tweet on February 10, 2018, here in its entirety:

"It's all about the Benjamins, baby" [musical-notes emoji]

This is obviously a quote from a Puff Daddy song (on the album "No Way Out," 1997), that's what the musical notes mean. The quote is about as anti-Semitic as saying, "Money makes the world go 'round." It's not anti-Semitic, it's just true, in a pretty obvious and superficial way. It's also a truth widely subjected to political denial.

And is there anyone out there who isn't aware that a Republican-dominated Supreme Court's decision in the Citizens United case opened the floodgates to the money-corruption of American politics we suffer from today? Ilhan Omar spoke the truth, a small truth to be sure, but the truth all the same.

So what about the context? Maybe that helps. Ilhan Omar's tweet was in response to a tweet from journalist Glenn Greenwald:

Vermonter living in Woodstock: elected to five terms (served 20 years) as side judge (sitting in Superior, Family, and Small Claims Courts); public radio producer, "The Panther Program" -- nationally distributed, three albums (at CD Baby), some (more...)
Related Topic(s): Anti-semitism; Democrats; Ilhan Omar, Add Tags
Add to My Group(s)
Go To Commenting
The views expressed herein are the sole responsibility of the author and do not necessarily reflect those of this website or its editors.