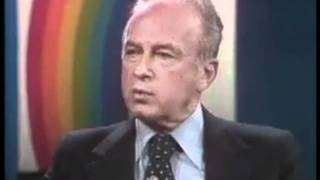 After commenting on most of the episodes on the first Israeli Prime Ministers in Raviv Drucker's TV series "The Captains," I must come back to the one whose episode I have not yet covered: Yitzhak Rabin.

Let me state right from the beginning: I liked the man.

He was a man after my own heart: honest, logical, straightforward, to the point.

No nonsense, no small talk. You entered his room, he poured you a straight whisky (seemed to me he detested water), got you seated, and asked a question that compelled you to come straight to the point.

How refreshing, compared to other politicians. But Rabin was no real politician. He was a military man through and through. He was also the man who could have changed the history of Israel.

That is why he was murdered.

The salient fact of his life was that, at the age of 70, he completely changed his basic outlook.

He was not born a man of peace. Far from it.

He was as orthodox a Zionist as they come. He fought Israel's wars, justified and unjustified, without asking questions. Some of his actions were brutal, some very brutal. During the first intifada in the Gaza Strip, he said "break their bones," and some soldiers took this literally.

So how did this man come to recognize the Palestinian people (whose very identity was denied), negotiate with the Palestinian "terrorist" leadership and sign the Oslo agreement?

I have the singular luck of being, perhaps, the only person in the world who has heard from the two main protagonists of the Oslo drama how they reached that turning point in their lives -- and the lives of their two nations. They told me themselves (on different occasions, of course).

Rabin's account went more or less like this: After the 1967 war, I believed in the Jordanian Option, as did almost everybody else. Since nobody believed at the time that we would be allowed to keep the occupied territories, we wanted to return them to King Hussein, provided he let us keep East Jerusalem.

One day, the King announced that he was washing his hands of the West Bank. So the Option died. One of our experts advocated setting up "Village Leagues" in the West Bank and negotiating with them. The leagues soon collapsed.

Related Topic(s): Israel; Palestinian; Peace; Shimon Peres; Yitzhak Rabin, Add Tags
Add to My Group(s)
Go To Commenting
The views expressed herein are the sole responsibility of the author and do not necessarily reflect those of this website or its editors.