This Preface, written for the current, third version of the book published in 2013, is in my voice, that of Steven Jonas, the book's real author. The Preface is quite long and will in this series be published in three parts. Indeed, it should have been published before the previous installment, which was the book's Chapter One, written in the voice of the fictional author, Jonathan Westminster. Please forgive the mistake. For continuity, following the publication of the Preface (in its three parts), I will be beginning the body of the book again, with Chapter One.

I. The Origins of this Book

I began thinking about what would eventually become the book you see before you in the mid-1980s, after the re-election of Ronald Reagan. The thinking process went on for quite a while, and both the story-line and the format (novel, non-fiction, some combination of both?) underwent numerous changes. Whatever form the book would eventually take, I was concerned that during the Presidencies of Ronald Reagan and George H.W. Bush the Republican Religious Right (RRR) was becoming ever more powerful. I began to think about what might happen were they to take over effectively full governmental power at the Federal and widely at the state levels. Being an academic, to support whatever form I might come up with, I began collecting material on positions that both governmental and non-governmental representatives of the RRR were then taking about the matter of what they would indeed do, were they to gain that effective control. I gathered it from a variety of sources: published articles, books, fund-raising letters, position papers, newspaper and magazine articles about them. Finally, in 1994, I came up with the outlines of a scenario that they might follow, and began writing this book.

Donald Reagan. As much as the .mainstream. Repubs. would like to deny it, Trump is a direct political descendant of the former .B. movie actor.
(Image by DonkeyHotey)   Details   DMCA

I am a writer of non-fiction, not fiction. (Believe me there are major differences in skills between the two. I regard the latter as much more difficult than the former. Non-fiction writers simply need to be able to undertake description and analysis, sometimes simply reporting. We need to use references. However, we do not need to be able to write dialogue, describe scenes and settings in appropriate prose, or engage in character development.) Thus for this book, even though I decided that I would be writing primarily in the non-fiction style, at the same time I would be writing fiction in the sense that after a certain point I would be making up the plot-line certainly introducing fictional characters. At the same time, while the story-line would be set in the then-future, it would be based on real policies and politics that real people on the Right were promoting in the 1980s and 90s. And so I came up with what I describe as a "cross-over" book: fictional non-fiction, purportedly written by a future professor of political science, "Jonathan Westminster." (For more detail on him, please see IV, below "Historical Voices.") The book is a supposed retrospective on the (supposed) U.S. fascist period, published in2048 on the 25th anniversary of the re-establishment of U.S. Constitutional Democracy, July 4, 2048, following the triumph of the Movement for the Restoration of Constitutional Democracy in the Second Civil War (2022). 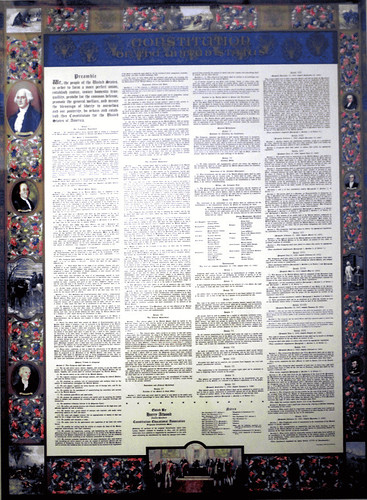 To my mind the most important feature of this book is that what is projected to happen is to the extent possible based on what the Republican Religious Right had been telling us, prior to the time I wrote the book in 1994-1996 (and indeed is still telling us), they would do if they were ever able to gain full control of the government. Indeed they were telling us that as far back as the 1980s, but back then nobody wanted to listen. They are telling us much more loudly now. More people are listening and more people are getting very afraid of a future governed by the Republican Religious Right. Nevertheless, to date no real political opposition with power and money behind it has developed. One of the main points that I make in the book is that the fictional transformation of the Republican Party to what I call the "Republican-Christian Alliance" and then on to the "American Christian Nation Party" takes place out in the open and nobody in a position of political power and political authority says boo to a goose.

I wrote the book as a warning, to which no one took heed. I published the original version of this book in 1996 under my own imprint, the "Thomas Jefferson Press." The title of that version was The 15% Solution: A Political History of American Fascism, 2001-22. The future-historical scenario is framed by a series of (fictional) documents: Presidential Inaugural addresses, Constitutional Amendments, Presidential Declarations, a Supreme Court decision, one treaty with a foreign power, several acts of Congress, and the Declaration of the Movement for the Restoration of Constitutional Democracy.

With the help of my good friend Patrice Greanville, the Publisher of Punto Press, I am issuing the warning again. It is still not too late. But someone is going to have to wake up to the real threats to our body politic presented to us by the modern Republican Religious Right. Someone is going to have to start naming names, taking identities, and stop pretending that the party that runs on religious- and race-based hate and makes liberal use of the Hitlerian Big Lie technique, is not a) qualitatively different from its predecessor and b) a real threat to U.S. Constitutional Democracy as we know it.

II. A Brief Overview of the Book

The book is a novelized chronicle of the rise and fall of a Fascist regime in the United States during the years 2001-2023. It is intended to present a barebones view of the events of the "Fascist Period," as it could have been seen contemporaneously to those events. Further, it attempts to show how the origins of each major step taken by Republican Religious Right during the Period, in most instances represented by a major document (as mentioned above), could be found either in what is by Westminster's time called the U.S. pre-fascist "Transition Era," 1981-2001, or in events that took place in one or another of the fascist states that existed in other parts of the world between 1922 and 1945. The principal goals of this book are similar to those of its major forebears: Jack London's The Iron Heel and Sinclair Lewis' It Can't Happen Here, as if those authors had written those books with 20/20 hindsight.

As noted, many 20th century sources are used to explicate the then-stated goals of the Republican Religious Right, ranging, for example, from the 1992 Republican Party Platform, to fundraising letters written by the Reverend Jerry Falwell, to position papers of the litigatory arm of [the] Rev. Pat Robertson's "Christian Coalition" (the chief national political organization of the old Religious Right), called the "American Center for Law and Justice." All sources are referenced in the text either by the name of the principal author or, if none is listed, by the name of the publisher. The reference sources are listed at the end of each chapter.

This book does not deal with the projected outcomes of Republican Religious Rightist policies over which there was in the late 20th century considerable scientific controversy. Thus, for the most part excluded are, for example, in the environmental arena (except for natural resources policy) the (even-then) predictable effects of global warming caused by human activity (1), the marked destruction of the ozone layer, and the sharp decline in biodiversity. Many of the predicted environmental disasters caused or significantly abetted by Republican Religious Rightist policies are as of 2012 indeed occurring or well on their way to occurring (2, 3, 4). However, the book does project a future "Resource Based Economy" (RBE) based on the ever-expanding power of the extractive industries (which have exploded before our very eyes). However, in the late 20th century, the outcomes of those policies could not have been predicted with nearly the accuracy of those predictions that could then have been made of the political and economic outcomes for the country if Republican Religious Right took power.

Once in power at the Federal and state levels, the Republican Religious Right is then projected to have achieved virtually all of its stated goals in the political, social, and economic arenas, and then some. In the beginning, at least, through the electoral process they did this entirely by legal/constitutional means. The predictably widening use of force and violence came later. And the more profound results of the takeover, such as the creation of the apartheid-based "New American Republics," came later too, but predictably as well.

Except for some allusions to the "Latin Wars," I did not deal with foreign policy issues in the book. It is long enough as it is (as is this new introduction). Therefore, I am not going to deal with the many obvious ones here. Suffice it to say that, in a reverse of this book possibly being a guidebook for the Republican Religious Right as they proceed with their domestic policies, the real foreign policies of the Bush Administration (and some of the Obama Administration as well [5]) would likely find a home in the State and Defense Departments of the fictional Republican-Christian Alliance.

Steven Jonas, MD, MPH, MS is a Professor Emeritus of Preventive Medicine at StonyBrookMedicine (NY) and author/co-author/editor/co-editor of over 35 books. In addition to his position on OpEdNews as a "Trusted Author," he is a Senior Editor, (more...)
Related Topic(s): Authoritarianism; Democracy; Fascism; Fascist; Government; Republican, Add Tags
Add to My Group(s)
Go To Commenting
The views expressed herein are the sole responsibility of the author and do not necessarily reflect those of this website or its editors.