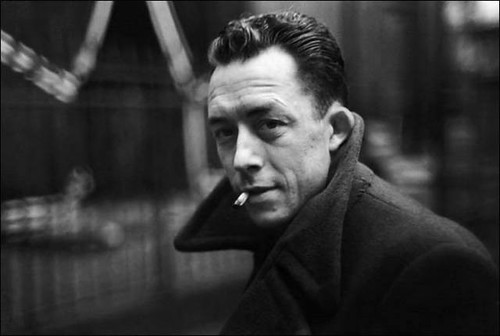 "Everyone wants the man who is still searching to have already reached his conclusions. A thousand voices are already telling him what he has found, and yet he knows he hasn't found anything. Should he search on and let them talk? Of course."

Albert Camus, "The Enigma" in Lyrical and Critical Essays

Albert Camus' search ended sixty years ago on January 4, 1960, the day he died. Although he had already written The Stranger, The Rebel, The Plague, and The Fall, and had won the Nobel Prize for Literature, he felt his true work had barely begun. Alongside the car in which he died, his briefcase lay in the mud. In it was the uncompleted, hand-written manuscript of his final quest, The First Man, an autobiographical novel written in a raw emotional and lyrical style that was liberating him from the prison of a classical form he felt compelled to escape. He was on his way to a new freedom, in writing and in life, when he was cut down. The book was published posthumously in 1994 by his daughter and son. It is a beautiful peek into a reserved man's youthful inner development, the loneliness of a poor boy made fatherless by an absurd war, and the ways in which the boy "had to learn by himself, to grow alone, in fortitude, in strength, find his own morality and truth." It explains a lot about Camus' later writing and why, at the end of his life, he was so isolated and criticized by the right, left, and center for his various political positions.

He could not be pigeonholed. This drove many crazy. His allegiance was to truth, not ideologies. He was not a partisan in the Cold War between the U.S./NATO and the U.S.S.R. An artist compelled by conscience and history to enter the political arena, he spoke in defense of the poor, oppressed, and powerless. Among his enemies were liberal imperialism and Soviet Marxism, abstract ideologies used to murder and enslave people around the world. He opposed state murder, terrorism, and warfare from all quarters. He was an artistic anarchist with a passionate spiritual hunger and an austere and moral Don Juan. He was a mystery to himself in many ways. He made mistakes. But he was honest and honorable.

He is the kind of thinker we need today. But he is still easily used and abused by those with their own agendas, and in that way, he is emblematic of the ways the search for truth today can be manipulated. It is a sly game, one that only can start to make sense when one puts concentrated effort into unraveling the endless propaganda that is the fabric of our lives today.

Anyone who has followed the evidence knows that Russia-gate, Ukraine-gate, the anti-Putin hysteria, and the new Cold War is a fabrication concocted by deep-state intelligence and political forces in the United States and the West. Of course, many will deny these facts. Anti-Russia hysteria has filled the airwaves for years. It is pure propaganda that is manna from heaven for liberals and conservatives wishing to maintain their religious belief in American holiness, even as the U.S./NATO has surrounded Russia with military forces. Anything that can intensify this mania is used by the corporate media. It is a very dangerous game of nuclear brinkmanship. For many people, studying such issues in depth is beside the point. As Camus wrote in 1954, "Today one takes a side based on the reading of an article." In 2020 it may be just a headline.

Here is a case in point. Perhaps minor, perhaps not. A relative, knowing I had previously written about a book claiming that Camus' death in a car was not an accident but an assassination carried out by the KGB, recently sent me a link to an article in The Guardian, the paper that published a tiny portion of the Edward Snowden documents after allowing the Intelligence authorities to censor them, then oversaw the destruction of all Snowden's computer documents, and finally became a full-time mouthpiece for the security state. The article was entitled: "New Book Claims Albert Camus Was Murdered by the KGB." The article was published on Dec 2, 2019 and my relative naturally assumed it was a new book.

So did I, but I didn't know there was a new book. A year ago I had written about a book, Camus deve morire(Camus Must Die), published only in Italian in 2013 by the Italian writer Giovanni Catelli, that claims that Camus was assassinated by the KGB. So I read the article and was perplexed.

There is no new book; there are new translations into French and Spanish of the same book from 2013. The French edition has a forward by the American writer Paul Auster, who finds Catelli's argument convincing. More than a year ago Catelli had kindly sent me an English version of his book, which I had read before writing about it, and I assume I am the only person to have read the book in English. I think it is persuasive, but not dispositive.

The recent Guardian article was picked up by various publications that repeated much of it, adding incorrectly that The Guardian interviewed Catelli, etc., implying that it was all new. This was picked up by other publications that repeated this plus other erroneous claims , including one from a linked New Yorker article from 2014 that says, as do many others, that Catelli's claims of a KGB hit on Camus couldn't be true because Camus had a train ticket in his pocket and only made a last minute decision to ride in the car back to Paris with his friend Michel Gallimard and his family. This is false, but it fits into the attractive theme of "an absurd death." The truth is Camus had written a letter on December 30 to Maria Casarès that he would be taking a car, not the train, adding - believe it or not - that he would be arriving on Tuesday, January 4, "taking into account surprises on the road." Then on the night of January 2, he had a nightmare in which he was pursued by four faceless men on a country road where he got into a car to escape and another faceless man drove the car straight into the side of a house, as Camus awoke terrified.

As I said, it's a sly game, this publication business where little things can mean a lot, or not. Subtle points. Many mistakes. Some out of ignorance, others intentional. Things repeated. The timing often important to send implied messages.

This speculation about Camus' death began in 2011 when the media were abuzz with a report out of Italy that, rather than an accident, Camus may have been assassinated by the Soviet KGB for his powerful criticism of the Soviet invasion of Hungary in 1956, their massacre of Hungarian freedom fighters, and for his defense and advocacy of Boris Pasternak and his novel, Doctor Zhivago, among other things. For those who study history, all these issues are complicated by CIA involvement, which is not to say that Soviet forces did not massacre Hungarian freedom fighters or that Pasternak should not have been defended and the massacres condemned. Those things are clear, while others are murky, as was then and is now the CIA's intention in so many terrible events around the world. This murkiness is created by the mass media that does the bidding of the intelligence agencies.

These reports of a KGB hit on Camus were based on an article in the Italian newspaper Corriere della Sera, and came from the remarks of Catelli, an Italian academic, Slavic scholar, and poet. Catelli said that he had read in a diary, published as a book, Ceĺ́ý zͮivot, written by Jan Zábrana, a well-known poet and translator of Doctor Zhivago, the following:

"I heard something very strange from the mouth of a man who knew lots of things and had very informed sources. According to him, the accident that had cost Albert Camus his life in 1960 was organized by Soviet spies. They damaged the tyre on the "car using a sophisticated piece of equipment that cut or made a hole at speed."

Related Topic(s): CHARACTER; Death; Intelligence; Lies; Life Calling; Novel; Plague; Power; Technology; Truth; (more...) Writing, Add Tags  (less...)
Add to My Group(s)
Go To Commenting
The views expressed herein are the sole responsibility of the author and do not necessarily reflect those of this website or its editors.