The sudden push by Wall Street's largest private equity firm to heavily lobby the Pentagon and State Department for largely unspecified reasons is part of an increasingly visible conflict within the U.S. establishment regarding how to handle the Artificial Intelligence "arms race." 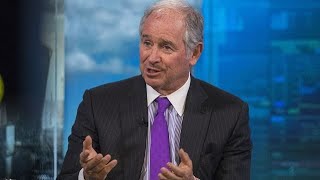 One of Wall Street's largest private equity firms, the Blackstone Group, has been making a series of moves that have left mainstream analysts puzzled, with the most recent being Blackstone's hire of David Urban, a Washington lobbyist with close ties to the Trump administration.

Blackstone's courting of a Trump ally was not surprising given that the firm's CEO, Steven Schwarzman, recently donated $3 million to Trump's re-election efforts and had previously chaired the President's now-defunct Strategic and Policy Forum of "business leaders" and advisors. The close ties that have developed between Schwarzman and Trump following the latter's election in late 2016 have led mainstream media to describe Schwarzman as a confidant of the President.

However, what was odd about Blackstone's hiring of David Urban was its murky reason for doing so, as the firm plans to task Urban with lobbying the Pentagon and State Department on "issues related to military preparedness and training." This is odd, as CNBC noted, because Blackstone "doesn't have any publicly listed government contracts, and its known investments don't appear to have direct links to the defense industry." However, Urban has extensive experience in dealing with both Departments in addition to his close ties to the current administration and the fundraising apparatus of the Republican Party.

While media reports on Blackstone's recent hire of Urban were unable to elucidate the motive behind Blackstone's sudden desire to court the Pentagon and State Department, they did note that Blackstone's previous hire of a Trump-connected fundraiser lobbyist, Jeff Miller, had been remarkably successful earlier this year, with Miller lobbying Congress specifically on coronavirus relief legislation like the CARES Act. The CARES Act ultimately allowed private equity giants like Blackstone to access funds designated for coronavirus relief, likely thanks to the efforts of Miller and other lobbyists hired by Blackstone as well as other private equity giants like the Carlyle Group.

Though CNBC was left looking for answers as to Blackstone's sudden interest in aiding the Pentagon with "military preparedness" and wooing the State Department, the likely motive may be related to other recent moves made by the company, such as the hire of former Amazon and Microsoft executive Christine Feng. Feng, who was hired by Blackstone on August 3, previously led data and analytics mergers and acquisitions at Amazon Web Services (AWS), which is a contractor to the U.S. intelligence community and other U.S. federal agencies. Previously, Feng was a senior member of Microsoft's Corporate Development team. Microsoft recently won lucrative contracts for information technology (IT) services and cloud computing for the State Department and Pentagon, respectively.

According to Blackstone executives, the decision to hire Feng was made due to her "deep relationships in Silicon Valley" and "her experience working at Amazon and Microsoft." They also added that her hire was motivated by Blackstone's push to "identify new opportunities to invest and partner with innovative companies reshaping the world" and Blackstone's recent effort to "double down" on tech sector investments. Notably, Feng's hire came just a few months after Blackstone had hired Vincent Letteri, another tech-focused investor experienced with growth-stage tech companies, and amid a series of recent investments by Blackstone in tech firms, including HealthEdge software and Chinese data center provider 21Vianet, among others.

It strongly appears that Blackstone's recent moves, including Urban's hire, are part of the firm's bid to become one of the top "innovative companies reshaping the world" as the Artificial Intelligence (AI) arms race becomes a key driver in the "reshaping" of the global economy. Blackstone's Steven Schwarzman is a key part of the relatively tight-knit group of billionaires and influential political figures, like Henry Kissinger and Eric Schmidt, that are working to create a "global compact on the research, introduction, and deployment of AI," and Schwarzman has heralded the coming age of AI as representing a "fourth revolution" for humanity.

Schwarzman argued for greater global collaboration on AI-driven technologies, particularly between the U.S. and China, in a July 2020 Op-Ed for Yahoo! Finance where he wrote that the establishment of "common governance structures" for the research, introduction and deployment of AI is necessary if "we are to avoid the negative consequences of AI," ultimately comparing the current pace of development of AI to that of past arms races, such as those involving nuclear and biological weapons. Per Schwarzman, these "common governance structures" would produce "explicit global commitments, agreements, and eventually international laws with consequences for violation" that relate directly to AI and its use.

Blackstone's head is convinced that these "common governance structures" should be built between the U.S. and China, hence his heavy investment in universities and artificial intelligence education in both countries. For instance, Schwarzman created the Schwarzman Scholars program in 2016 where around 100-200 students from around the world pursue a Master's Degree in Global Affairs at Tsinghua University in Beijing annually. The official goal of the program, which was modeled after the Rhodes Scholars program, is to "create a growing network of global leaders that will build strong ties between China and the rest of the world." The program's advisors include former Secretary of States Henry Kissinger, Condoleezza Rice and Colin Powell and former UK Prime Minister Tony Blair as well as former World Bank President James Wolfensohn and former U.S. Secretary of the Treasury and Goldman Sachs executive Henry Paulson. Schwarzman has also donated hundreds of millions of dollars to create an AI-focused institute at Oxford University.

Then, in the U.S., Schwarzman gave $350 million to MIT, prompting the school to create the Schwarzman College of Computing, which aims to specifically "address the global opportunities and challenges presented by the ubiquity of computing across industries and academic disciplines and by the rise of artificial intelligence." MIT News later noted that "the impulse behind the founding of the college came from trips he [Schwarzman] had taken to China, where he observed intensified Chinese investment in artificial intelligence, and wanted to make sure the U.S. was also on the leading edge of A.I." The college's inauguration also featured Henry Kissinger as a speaker, where Kissinger mulled the potential impacts of AI and stated that "AI makes it technically possible, easier, to control your population."

Eric Schmidt, the former CEO of Google, credits Schwarzman's lead to invest in AI education in the U.S. and abroad as determining "the future of American philanthropy." "Steve's donation triggered an arms race among all the universities to match him. This is the next trend in philanthropy, in my view," Schmidt told Axios regarding Schwarzman's MIT donation last May. Schmidt also stated that his own investment in Princeton University's Computer Science department had been prompted by Schwarzman's previous acts of "AI philanthropy."

Last May, a federal commission that Schmidt chairs, called the National Security Commission on AI (NSCAI), produced a document that was obtained by a FOIA request earlier this year. One particularly important page made a point that was essentially repeated in Schwarzman's July Op-Ed regarding a "global AI compact." Titled "The Importance of a US/China AI Cooperation," it begins with a quote from Kissinger, a key advisor to and "great friend" of Schmidt, about the need for "arms control negotiation" for AI and then states that "the future of [AI] will be decided at the intersection of private enterprise and policy leaders between China and the US." In other words, the Schmidt-chaired NSCAI argues that the future of AI will be determined by the political leaders and business leaders of China and the U.S. The page also adds that "we [The United States] risk being left out of the discussions where norms around AI are set for the rest of our lifetimes. Apple, Amazon, Alibaba, and Microsoft will not be."

Whitney Webb, a staff writer for The Last American Vagabond, has previously written for Mintpress News, Ben Swann's Truth In Media. Her work has appeared on Global Research, the Ron Paul Institute and 21st Century Wire, among others. She (more...)
Related Topic(s): Biotechnology; Digital Technology, Add Tags
Add to My Group(s)
Go To Commenting
The views expressed herein are the sole responsibility of the author and do not necessarily reflect those of this website or its editors.

How the National Security State Is Using the Coronavirus Crisis

The Real Reason Why Blackstone Is Courting The Pentagon

Ukraine and the New al Qaeda

9/11 and the Politics of Fear and Self-Preservation