Republished from the Consent Factory.org 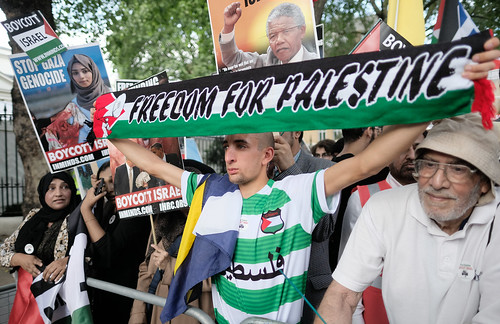 DISCLAIMER: The following essay is entirely the work of our in-house satirist and self-appointed political pundit CJ Hopkins.

So it appears we managed to survive another terrifying Quds Day in Berlin. It was certainly touch and go there for a while, what with the media issuing hysterical warnings about the hordes of "Hamas and Hezbollah supporters, neo-Nazis, and conspiracy theorists" that were going to materialize out of the ether, goose-step down the Kurfurstendamm, and reenact Kristallnacht, or something. The city was braced for an all-out Perso-Palestinian Quds Day Pogrom, which is always a threat on Quds Day in Berlin, but the hysteria level this year was elevated, due to the Anti-Semitism Pandemic that mysteriously erupted in 2016 for no apparent reason whatsoever.

OK, what, you're probably asking, is Quds Day? It's an annual event initiated by Iran to show support for the Palestinians and opposition to Zionism. It takes place on the last Friday of Ramadan, in opposition to Israel's Jerusalem Day, the national holiday commemorating Israel's annexation of East Jerusalem in the aftermath of the Six-Day War. In Berlin, there's an annual Quds Day march, which the German media typically respond to by whipping up anti-Semitism hysteria and fanatical, guilt-ridden support for Israel. This year was no exception " on the contrary.

A week or so before the event, Felix Klein, Germany's "Commissioner for Jewish Life and the Fight Against Anti-Semitism," warned Jews not to wear kippahs in public, on account of the unprecedented explosion of anti-Semitism throughout the country. According to the interior ministry, there were 62 violent anti-Semitic attacks in Germany during 2018, compared to 37 in 2017, which, in a nation of 83 million people, and with a history of real-life, goose-stepping Nazis, and of perpetrating the Holocaust, and so on " well, you can understand the Commissioner's alarm.

The international corporate media began spreading the news that Anti-Semitism was once again on the march in Germany. The BBC reported that official figures showed that 1,646 hate crimes had been committed against Jews in 2018, up 10% from 2017! CNN reported that anti-Semitic hate crimes had increased by almost 20%! According to The Jerusalem Post, there were 1,800 anti-Semitic incidents committed against Jews in 2018! It was almost as if the Anti-Semitism Pandemic was retroactively metastasizing right before our eyes.

But whatever. The statistics don't really matter. The point was, "Jews are not safe in Germany!" The Putin-Nazis had teamed up with the Iranian Nazis and the Syrian Nazis, who were backing the Palestinian Nazis, whose irrational hatred of the State of Israel the German Nazis had somehow weaponized (probably with a bunch of fake Facebook ads), and they were all going to storm the historic high-end shopping boulevard of West Berlin!

Then, on Friday, the day before Quds Day, in a desperate, last-minute, tactical manouver, German politicians and cultural figures exhorted Jews and gentiles alike to defiantly wear their kippahs on Quds Day. BILD, the leading German tabloid, even printed little cut-out "BILD kippas" (complete with meticulous assembly instructions), and called on Germans to wear them on Quds Day to show their solidarity with State of Israel " uh, sorry, I meant with the Jewish people.

The BILD kippa tactic was a huge success! On Quds Day, fewer than a thousand people, many of them women and children, peacefully strolled along the Kurfurstendamm chanting slogans like "free, free Palestine," and asking the world to stop the Israelis from penning people up in de facto ghettos, shooting their legs off with dum dum bullets, demolishing their houses, hospitals, and schools, stealing their land, randomly murdering them, and otherwise behaving like sadistic fascists. The hordes of "Hamas and Hezbollah supporters, neo-Nazis, and conspiracy theorists" that the corporate media had warned us were coming, oddly, never showed their faces " clearly, the "BILD kippas" scared them off.

Or maybe it was the counter-demonstrators. Hundreds of anti-anti-Semites, including prominent German government officials, Israeli diplomats, Antifa factions, members of the local Jewish community, and BILD susbscribers confronted the march, wearing kippahs, waving Israeli flags, displaying giant "MAGA" banners, shouting "long live Israel" and "free Gaza from Hamas," and giving the marchers the finger, and so on (which, OK, I found a little confusing, as, the last time I checked, Trump was still Hitler, and Antifa were supposedly a bunch of anarchists).

In any event, the hysteria has subsided. Berlin and Israel appear to have survived. The Jews can come back out of hiding, although it isn't quite clear whether Germany wants them to wear their kippahs in public or not now. Hopefully, we'll be receiving some sort of official directive from Commissioner Klein (or possibly Axel Springer) about that.

But, seriously, you can't really blame the Germans for a going a little overboard with their anti-anti-Semitism hysteria or for being reluctant to criticize Israel. It wasn't all that long ago that their parents and grandparents were heiling Hitler and systematically murdering millions of Jews, or looking the other way while it happened. Most of the Germans I'm acquainted with still feel kind of awful about that. Which isn't terribly surprising, is it?

I mean, imagine, if you're one of my American readers, if some other country conquered the USA, and put our political and military leaders on trial for all the war crimes they've committed, and for the millions of people they've systematically murdered, and taught our children the truth about our history " that might give you some idea of how most Germans feel about the Nazis and the Holocaust.

So, yes, Germans are a bit hypersensitive about anything resembling anti-Semitism, and they tend to conflate opposition to Israel with hatred of the Jewish people (despite the fact that Israel is doing a pretty convincing impression of the Nazis, what with its ethnic cleansing, walls, ghettos, sadistic goons, propaganda, and so on). Many Germans also overcompensate for their feelings of shame about the Holocaust by displaying an awkward fascination and enthusiasm for anything "Jewish" (you know, like many liberal Americans fetishize Native and African Americans), so that might explain the "BILD kippa" nonsense.

No, I'm not mocking or scolding the Germans " they're still trying to work their history out. I'm just trying to track the propaganda and cynical emotional manipulation that we are increasingly being subjected to as the global capitalist ruling classes wage their War on Populism. The Quds Day Panic of 2019 is just one example. There are many more, both manufactured and all-too-real. The Charlottesville Nazis. Charlottesville II. The MAGA bomber. The Tree of Life shooting. The Christchurch attack. Jussie Smollett. MAGA hat Smirk Boy. And the list goes on " pretty much as it always has.

***If, for whatever inexplicable reason, you appreciate Mr. Hopkins' work and would like to support it, please go to his Patreon page  (where you can contribute as little $1 per month), or send your contribution to his PayPal account , so that maybe he'll stop coming around our offices trying to hit our staff up for money. Alternatively, you could purchase his satirical dystopian novel,  (more...)
Related Topic(s): Palestinian, Add Tags
Add to My Group(s)
Go To Commenting
The views expressed herein are the sole responsibility of the author and do not necessarily reflect those of this website or its editors.