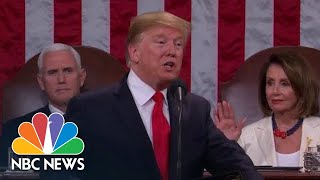 Nancy Pelosi Tries To Quiet Democrats At State Of The Union | NBC News Speaker Pelosi holds up a hand and tries to quiet Democrats as President Trump talks about immigrant caravans during the State of the Union address.
(Image by YouTube, Channel: NBC News)   Details   DMCA

Political scientists have long noted the phenomenon of our country's "one-party foreign policy." Which is to say, while there are often substantial differences between the leadership of the Democratic and Republican parties on domestic issues health care, the environment, taxation, education, etc. when it comes to how the U.S. conducts itself vis-a-vis the rest of the world, the top figures of the two major parties tend toward the indistinguishable. Certainly, the events of the past week did nothing to diminish that assessment.

Consider the following statement on Venezuela:

"Today, I am officially recognizing the President of the Venezuelan National Assembly, Juan Guaido, as the Interim President of Venezuela.

"In its role as the only legitimate branch of government duly elected by the Venezuelan people, the National Assembly invoked the country's constitution to declare Nicolas Maduro illegitimate, and the office of the presidency therefore vacant.

"The United States must respect legitimate democratic processes, and support the right of the people of Venezuela to protest and defend their human rights.

"The people of Venezuela have courageously spoken out against Maduro and his regime and demanded freedom and the rule of law.

"Nicolas Maduro's regime of repression and impoverishment for his personal enrichment continues to gravely violate human rights, and must be condemned swiftly by the full international community.

"I will continue to use the full weight of United States economic and diplomatic power to press for the restoration of Venezuelan democracy.

"During this perilous time, the United States must support the people of Venezuela."

The first sentence, of course, comes from President Donald Trump's statement on Venezuela, the next from House Speaker Nancy Pelosi's, and then Trump, then Pelosi, and so forth two views so uniform that they hardly even require the services of an editor to meld into a single statement. Now, it could just be that the situation in Venezuela is so clear that even two diametrically opposed figures such as Trump and Pelosi cannot disagree, in the sense that if one of them were to declare that the sky is blue, the other would have to acknowledge the correctness of the statement, however grudgingly. And judging from virtually all news coverage and mainstream political discussion of Venezuela, that might well appear to be the case here. But there are actually others outside the bounds of our "one-party" consensus who see it differently, very differently. For instance, Alfred de Zayas.

In late 2017, de Zayas served as the UN rapporteur dispatched to assess the crisis situation in Venezuela, where, according to his report, "Successful UN mission to Venezuela," he met with "stakeholders of all political colours, members of the opposition, of the National Assembly, university professors, churches, non-governmental organizations." While no one disputed the fact that the country was experiencing a severe economic crisis, de Zayas believed that the "challenge is to understand its causes," among which he counted "dependence of the Venezuelan economy on the sale of petroleum a situation prevailing since the early 20th century," the recent "dramatic fall in oil prices," and "a series of unilateral coercive measures including sanctions and financial blockades." Although the President and the Speaker advocate precisely such measures to alleviate the current obvious distress of the country's populace, de Zayas holds that they are part of the problem rather than part of the solution. Citing the example of Columbia's refusal to deliver anti-malaria medicine to Venezuela in November 2017, which forced the country to purchase from India, he writes that at this point, "to avoid US penalties and complications, many banks closed Venezuelan accounts and other banks refused to effect transfers, routine international payments, even for the purchase of foods and medicines." He concludes that "economic sanctions kill."

This type of intervention which he dates back to the 1999 rise to power of Nicolas Maduro's predecessor, Hugo Chavez, he deems to be in violation of that section of the Charter of the Organization of American States specifically prohibiting "interference in the political or economic affairs of States." And rather than agreeing with our President or our Speaker, he argues that "the solution to Venezuela's crisis must be through mediation" the route currently advocated by the governments of Mexico, Uruguay and the Vatican, and in "the meantime, if we want to help the Venezuelan people, we should ensure that sanctions are lifted and the economic war ends."

And so what are we to make of Speaker Pelosi in all of this? Could she really be ignorant of history and international law? Well, I don't recall ever hearing anyone call her stupid. Cynical? Perhaps reasoning that the surest way to be safe from charges of being soft on "defense" is to park the Democratic bus she drives is right next to the Republicans' truck? Hmm. Might be.

Few of us will have the time or wherewithal to become expert on Venezuela. Where is Maduro right; where is he wrong? Does the opposition have legitimacy? Reasonable people may differ on all this, but we should all be clear on one thing--We have no right attempting to overthrow the government of Venezuela. You might think more people on Capitol Hill would recognize this, given all the consternation over Russian interference in our last presidential election. And ultimately, the problem with adopting cynical stances is that while they might appear so shrewd and canny in the daily round-up of political news, in the long run they just might make people cynical about you and your party.

Related Topic(s): Government; International; President Trump; Sanctions; Speaker Of The House Nancy Pelosi; Venezuela, Add Tags
Add to My Group(s)
Go To Commenting
The views expressed herein are the sole responsibility of the author and do not necessarily reflect those of this website or its editors.