The 1,100 passenger Peace Boat from Japan combines education, business, advocacy, and travel. Their global voyages offer a unique program of activities centered on experiential learning and intercultural communication. The income generated by these voyages is channeled into future voyages as well as all of the Peace Boat NGO's activities to promote peace, human rights and respect for the environment. Peace Boat began sailing in 1983, and today sails on global voyages of for 80 to 100 days, three times every year, carrying approximately 1000 passengers per voyage.

In the Peace Boat's 102nd worldwide voyage, I was asked to be a guest speaker and was on the ship for 20 days -- sailing from Honolulu, Hawaii to Manzanillo, Mexico, then Guatemala and finally through the Panama Canal from the Pacific to the Atlantic Ocean to the port of Cristobal, Panama. 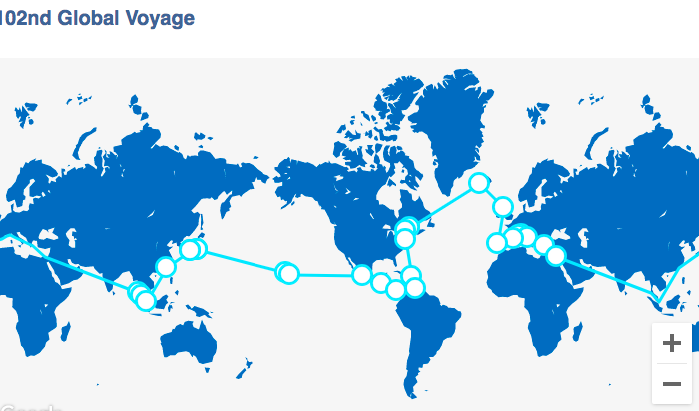 In the 22 stops/port calls of the 103 day around-the-world Peace Boat voyage, the longest time in any port is 36 hours and many stops were less than 12 hours, just long enough for a 6-8 hour event -- a visit to a local organization or sightseeing. Each port has around 10 events from which passengers can choose. Many passengers pay for multi-day excursions to the Tikal, Galapagos Islands and other places that the boat is not stopping on this voyage but has gotten them within reasonable proximity.

90 percent, or around 900, of the 1,100 passengers are Japanese, most older, who have saved from their retirements to be on the voyage. 108 passengers are from Taiwan (where there is a waiting list to join a voyage of the Peace Boat), 31 from China, 26 from Hong Kong, 14 from Malaysia, seven from Thailand, two from the U.S. and one from Spain, one from Russia and one from Ukraine. Several passengers and Peace Boat staff have dual Japanese-U.S. citizenship and are counted in the Japanese number.

Approximately 100 passengers have been on the Peace Boat on previous voyages, including Kiyoko Tomine, a woman from Japan, who has been on 25 around the world voyages. Kiyoko said that she enjoys the comradarie on the ship and the presentations not only by the guest speakers, but by other passengers, many of whom are well-traveled and have had very interesting careers. Kiyoko herself gives many talks on upcoming locations based on her extensive traveling.

Interpreters and language teachers from Japan, China, Spain and the U.S. on the Peace Boat.
(Image by Photo by Ann Wright)   Details   DMCA

Most of the younger persons on the trip are language students, language teachers, interpreters and part of the 300 persons who compose the crew of the ship.

One hundred of the passengers are young English language students from Japanese universities in a program called the Global University, including one young woman from Far East Russia. Not all of the students are Japanese, but all must speak Japanese fluently. There are eight English and one Spanish teacher, all of whom are also younger. The teachers generally have been teaching English as a second language in Japan. They are from Canada, Australia, New Zealand, the UK, the US, Ireland and Spain.

The Captain and Chief Engineer of the Peace Boat are from Ukraine and the 300-person crew is composed of 20 nationalities. English is the common language for the crew.

There are five guest speakers on-board the Peace Boat from Honolulu to Mexico of which I am one. I have been speaking on U.S. militarization of Asia and the Pacific; U.S. militarization of Central America; U.S. Foreign Policy and militarization South America; the historic, anti-nuke sailboat the Golden Rule (that is in Hawaii on its way to Japan); and "Going Where Your Government Does NOT Want You to go -- U.S. Foreign Policy toward Iran, North Korea, Cuba, Yemen, Russia, Afghanistan, Nicaragua and Venezuela."

Ann Wright is a 29-year US Army/Army Reserves veteran, a retired United States Army colonel and retired U.S. State Department official, known for her outspoken opposition to the Iraq War. She received the State Department Award for Heroism in 1997, after helping to evacuate several thousand (more...)
Related Topic(s): Boating; Peace Activism; Water; World; World Peace, Add Tags
Add to My Group(s)
Go To Commenting
The views expressed herein are the sole responsibility of the author and do not necessarily reflect those of this website or its editors.