Out of Order As LAUSD Board President, Monica Garcia has already removed Public Comment from .Special. Board Meetings. With this speech, she tries to silence those ...
(Image by YouTube, Channel: Carl Petersen)   Details   DMCA

"Let's go to that committee."

At the April 2, 2019 "special" meeting of the LAUSD School Board, the charter school industry was once again permitted to stack the public speaker list so that only their viewpoint was heard before action was taken on the renewal of Summit Preparatory Charter. Knowing that there was at least one person who was denied the ability speak against this renewal, Board Member Scott Schmerelson asked how he could institute a pilot program that would enable speakers to use Skype to address the Board remotely from local district offices. In response, Board President Monica Garcia suggested that "Mr. Melvoin's group and Mr. Crain (the Board's Secretary)...could probably figure out how to do a pilot." Melvoin followed up by saying "I think that it's a great thing for the Board Rule Committee to consider." Garcia agreed by saying "Let's go to that committee."

According to Melvoin, the committee is supposed to present proposed new rules to the Board at the end of this month (before a representative for Board District 5 can be seated), but the official calendar does not show that any public hearings have been held by this committee, nor have any been scheduled. This committee has not released any agendas or minutes from their meetings. Therefore, the public has no idea what is being discussed by Melvoin's group or what entities are presenting information to them. Much like Superintendent Austin Beutner's plan to "Reimagine" the LAUSD, this rewriting of the Board rules is devoid of any transparency.

Melvoin's position at the head of this secretive committee should be of great concern to anyone who believes in the importance of open government. At last week's Committee of the Whole meeting, he suggested that the Board could "streamline" meetings by delegating more power to the unelected Superintendent. He has also backed away from his statement last week that his "office would be happy to look at [the changes" suggested by the "Board Meeting Accessibility to the Public" resolution and instead made light of the issue with the statement that people complaining "about how they won't speak at our public meetings while they are speaking at our public meeting." This statement ignores the fact that the discussion only occurred because it was forced on the agenda through the use of the state education code and that he personally delayed compliance with the request for six months. Melvoin also distorts the purpose of the resolution as it was clearly written to give broader access to the Board meetings for all stakeholders, not just those who have the ability to attend during the school day. 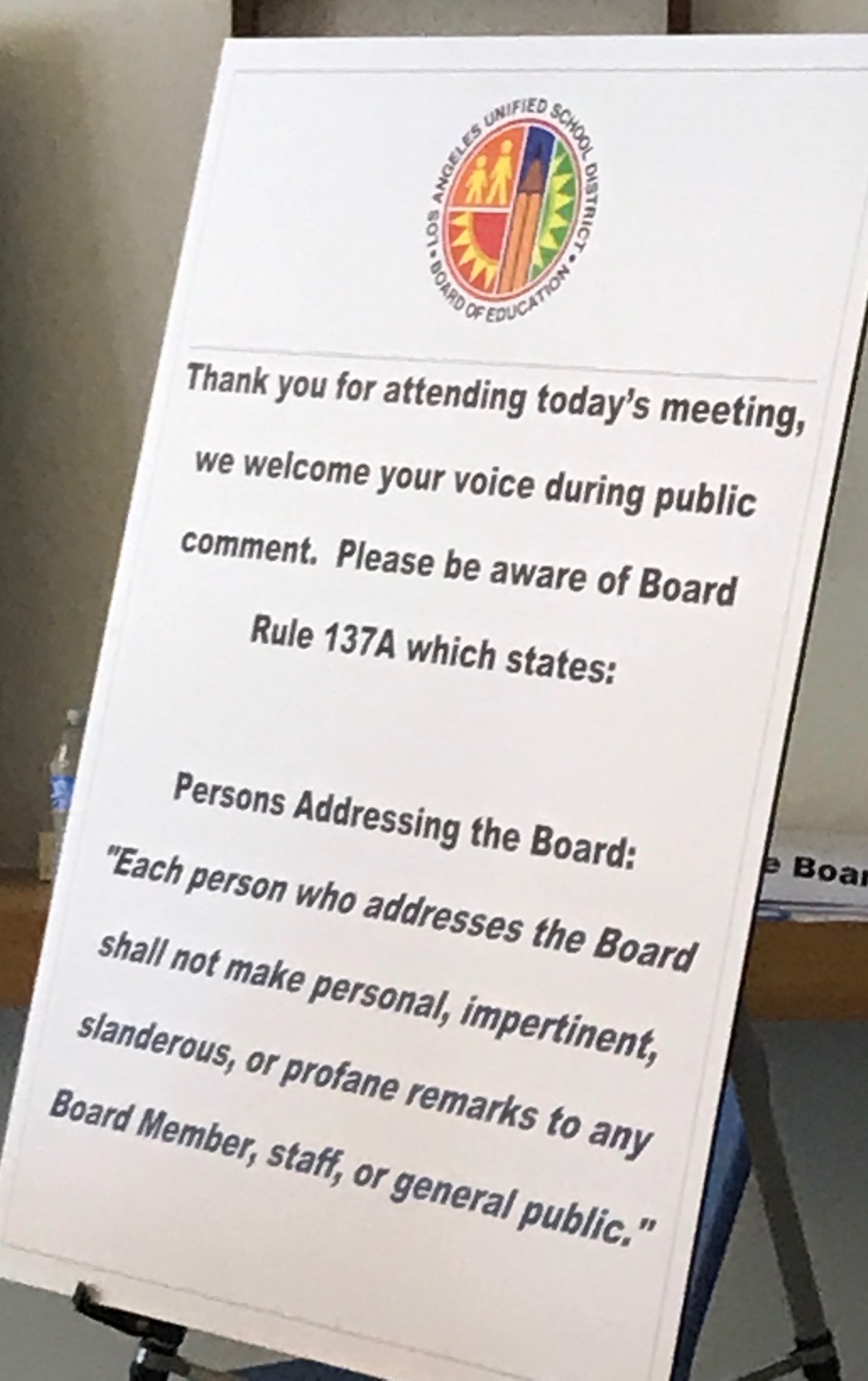 (Image by Unknown Owner)   Details   DMCA
Having the public express themselves to the elected School Board is clearly not a priority for the leadership that was installed by charter school industry supporters. While Board meetings are subject to the Brown Act and require that general public comment be heard, Garcia has declared that she can ignore this requirement if she declares a meeting to be "special." When speakers dared to work around this rule to speak against defunding elementary school libraries, she warned that they must "constrain their remarks specifically to the item or items" or they could be ruled "out of order." Signs are now posted in the Board Room warning those who address the Board that they "shall not make personal, impertinent, slanderous, or profane remarks to any Board Member". Members of the public are also prevented from bringing any signs into the room. The Board Members who put these rules into place are not the type of representatives that can be trusted to write additional rules behind closed doors.

Related Topic(s): Open Government, Add Tags
Add to My Group(s)
Go To Commenting
The views expressed herein are the sole responsibility of the author and do not necessarily reflect those of this website or its editors.