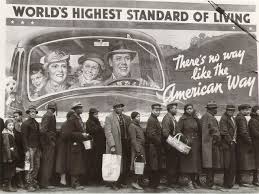 Yes, the present crisis is much more revelatory and potentially devastating than the infamous crash of '29. And President Trump's mismanagement of the disaster will be recalled as even more out-of-touch than Mr. Hoover's. However, Franklin Roosevelt's analog may surprise us. It's not Bernie Sanders.

To begin with, what we're currently witnessing is a U.S. health market failure; make no mistake about that. It's no unforeseen act of God before which any leader worthy of the name can claim "I take no responsibility for it at all." Rather, what we're facing is a completely predictable crash of a public good (health and healthcare) that has been stupidly marketized. The failure of the health market has caused all related systems (i.e. everything) to grind to a halt.

Privatized health markets now stand unmistakably unveiled as completely shortsighted and fatuous. They have proven entirely incapable of responding to anything but the bottom line and short-term quarterly reports.

Such limitation and uncoordinated focus come from the fact that there's no money to be made in stockpiling face masks, ventilators, available hospital beds or in maintaining reserve armies of doctors and healthcare workers who might be needed well after the publication of next month's statement of profit and loss. Yet those standing armies with ample supplies of ordnance for fighting disease are now proving more vital than their make-work military counterparts stationed in more than 300 bases across the planet. And for what?

Additionally, we're also witnessing a complete collapse of national leadership. For the first three months of the impending crash, Mr. Trump actually made fun of the virus and called it a "hoax." He promised that it would "miraculously" disappear if people only continued their normal lives and work habits without paying attention to the medical experts. Then, finally, three months into the emergency, he claimed he always knew it was a pandemic even before anyone else. So much for his leadership.

Moreover, Trump's preparation for this foreseeable plague took the incredible form of funding reduction for the Center for Disease Control and his disbanding of the Pandemic Response Team established precisely for eventualities like the current epidemic. Now, that in itself is prima facie cause for resignation or impeachment.

It's also enough to make the unperceptive despair and throw up their hands in helpless disgust especially after the apparent demise of Bernie Sanders' presidential campaign. Without Bernie, who's going to assume political leadership on a par with Mr. Roosevelt's. (And it's here that FDR's surprising equivalent emerges.)

The sad truth is that he's on the other side of the globe. He's in China in the person of Xi Jin Ping. Did you know that the Chinese system enabled Wuhan authorities to build a large state of the art hospital in just ten days? The emergency medical facility can hold as many as 1,000 patients, is two stories tall and complete with 30 intensive care units and several isolation wards.

Under the U.S. form of capitalism, it would take years just to obtain property rights for such an undertaking - not to mention waging the court battles that would ensue. China completed the project in a week and a half.

In other words, only our culture's endemic ethnocentrism prevents us from looking beyond capitalism-as-we-know-it for solutions to the Coronavirus pandemic. Our tunnel vision locks us in despair and keeps us from recognizing that the world no longer depends on U.S. leadership for anything. What we're witnessing instead is the collapse of our country into the status of failed state and embarrassing underdevelopment. We're beholding instead the definitive passing of the baton of world leadership to China.

This all brings to mind the sudden collapse of the Soviet Union exactly 30 years ago.

Or as Nicholas Kristoff recently w rote so gently: "The United States is in a weaker position than some other countries to confront the virus because it is the only advanced country that doesn't have universal health coverage, and the only one that does not guarantee paid sick leave. With chronic diseases, the burden of these gaps is felt primarily by the poor; with infectious diseases, the burden will be shared by all Americans."

I can think of no better description of a failed state and underdeveloped country brought to its knees by "The Great Crash of '19."