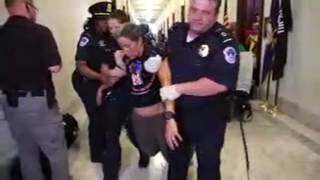 Disabled Americans came in wheelchairs into the United States Senate to register their protest against the harsh Republican plan to slash health care. ADAPT, a disability rights group, staged a die-in right before the office of the leading Republican in the Senate, Mitch McConnell of Kentucky. About 60 protesters tried to block the entrance to McConnell's office. Their goal was to show the rest of America what would come out of the American Health Care Act (AHCA), which the Republicans sought to push through as an alternative to Obamacare.

The police arrested 43 protesters and wheeled out others from McConnell's hallway. The McConnell plan would slash Medicare, a government plan that provides health-care coverage for low-income Americans and for those with disabilities. One of the elements of the plan envisages cutting funds for in-home assistance that allows disabled Americans to remain in their own homes rather than move to nursing homes. Fourteen million Americans will lose any access to health insurance.

One of the people who got out of her wheelchair to be arrested was Stephanie Woodward, director of advocacy for the Center for Disability Rights. She was arrested by the officers in the Senate, who carried her out. "We have a right to live," Stephanie Woodward said. "And by live, I don't mean just breathe. I mean be a part of the American dream, be in the community, raise a family, go to work. These Medicaid cuts will force people into institutions who don't need to be there."

Evidence of a major assault by the Trump administration on the social safety net in the U.S. was already there in Trump's budget proposal. He sought to cut funds for the Department of Housing and Urban Development, Medicaid and the Interagency Council on Homelessness. Cuts to affordable housing and to homeless assistance programs were a centerpiece. But so too are cuts that would hurt the disabled. Sally Johnston, president of the Disabled in Action of Greater Syracuse, said: "Trump's proposed budget will cut trillions of dollars in domestic services. How can this make America better?"

Harshness towards the vulnerable defines Trump's agenda. There was a whisper of this when Trump mocked a disabled reporter for The New York Times, Serge Kovaleski, and when 12-year-old J.J. Holmes, who has cerebral palsy, was ejected from a Trump rally in Tampa, Florida. The disregard shown to people with disabilities reveals the kind of agenda that Trump was always going to drive. Generosity towards people is not his metier. His is a harsh project, to push aside the vulnerable in a social Darwinist drive to excellence. Weakness is reviled. Strength is applauded.

In late June, Trump's Treasury Secretary Steven Mnuchin married the Scottish actress Louise Linton. They had a lavish wedding, attended by Trump, his Vice President and most of the Cabinet. Mnuchin and Louise Linton live in a $12.6 million home in an exclusive part of Washington, D.C. The money is Mnuchin's, what he made as a partner in Goldman Sachs. Mnuchin is not the only fabulously wealthy person in Trump's cabinet. He sits at Cabinet meetings near Commerce Secretary Wilbur Ross and Deputy Commerce Secretary Todd Ricketts. Trump's Chief Economic Adviser is Gary Cohn, another former Goldman Sachs president. All are worth hundreds of millions of dollars each.

At a rally in Cedar Rapids, Iowa, just after the Mnuchin wedding, Trump mused about the wealth in his Cabinet. "Somebody said -- why did you appoint a rich person to be in charge of the economy? No, it's true. And Wilbur's a very rich person in charge of commerce. I said -- Because that's the kind of thinking we want." What kind of thinking would that be? The thinking of someone who was willing to set aside any social agenda for his individual gain.

Trump's base is made of a combination of people of great wealth -- who are few -- and the immense white-collar middle-class sector that has found itself made vulnerable by globalization. Business process outsourcing struck the white-collar middle class, which formed the base of the Tea Party and then the Trump movement. He promised this base that he would not become wedded to Wall Street, but would put Main Street in charge. That has not come to pass. "I love all people, rich or poor," Trump said, "but in those particular positions I don't want a poor person." No poor or middle-class person should direct commercial or budgetary policy. That should be left to the rich. This is an honest assessment of Trump's project -- to appeal to the mass of white-collar vulnerable workers, but to deliver the reins of power to the very wealthy.

In a new book, Duke University professor Nancy MacLean goes into the intellectual roots of the radical Right and the vision of the current agenda, as articulated by Trump. The Right, she shows in Democracy in Chains: The Deep History of The Radical Right's Stealth Plan for America, is interested in the destruction of "society" and the creation of pure individualism. Charles Koch, one of the major financiers of the radical Right, relied upon Baldy Harper.

Harper argued, decades ago, that support for vulnerable populations would erode liberty. He suggested that liberal policies that helped the poor and the disadvantaged would be like a disease against society. "Once the disease has advanced," he wrote, "a bitter curative medicine is required to gain already-lost liberty."

These are harsh words. The idea of a "bitter curative medicine" is something that is natural to the Trump team. The vicious knives they wield against any social policy for the poor and the vulnerable are sharp and are used with gusto. One can see the way they cut away at precious social policies in the budget and in their health care plans.

Nancy MacLean describes the agenda of the economist James Buchanan, who won the Nobel Prize for Economics. Buchanan is a favorite of the radical Right, for whom he acts as an important intellectual standard. A clear sentiment of Buchanan's vision is available in a 2005 document, where he attacks people who have not been able to save enough for unforeseen circumstances or for retirement. If they fall catastrophically ill or lose their jobs, they should have prepared for this eventuality through prudent savings. If not, Buchanan wrote, they "are to be treated as subordinate members of the species, akin to animals who are dependent." The language here is ferocious. It is mimicked by Trump and his Cabinet.

Let us return to Trump's budget. He proposes to cut $2.5 trillion in programs for the working class and the indigent. Food stamps, the essential means for the poorest Americans to access food, would go. It is important to underline that one in six Americans struggles with hunger -- 49 million Americans have a hard time putting food on their tables. One in five children is at risk of hunger, with the ratio higher -- one in three -- for African-American and Latino families. There will be no easy way for Americans who struggle with food insecurity to feed themselves. They will be left to starve, like "subordinate members of the species."

Related Topic(s): Cruelty; Disabled; Food; Homelessness; Jobs; Republican; Rights; Social Contract, Add Tags
Add to My Group(s)
Go To Commenting
The views expressed herein are the sole responsibility of the author and do not necessarily reflect those of this website or its editors.