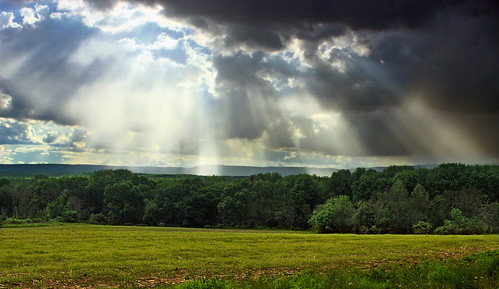 Nature
(Image by US Department of State)   Details   DMCA

What is happening in our nation and throughout the world today is symptomatic of a fundamental disregard and ignorance of natural conditions supporting the survival and flourishing of human society and of all life on the planet. You may interpret Darwin's theory of survival of the fittest to explain or justify the perpetual competition between individuals and peoples for the resources of the Earth, a process of winners and losers. But then you will be overlooking the primary concept of adaptation by which creatures adjust to changing environments. This process in other species is primarily genetically determined from generation to generation. However, in the human species adaptation takes place consciously by a learning process through the arts and experiences of evolving civilization. Mankind is the only species that can, wisely or unwisely, construct its environment to suit its purposes. That is why we think of ourselves as the masters and custodians of the Earth.

But we are not wisely adapting to our changing civilization. Historically, before the industrial age, the basic habits of humans living in a sparsely populated world did not disrupt the ability of Earth's natural systems to sustain and nurture all living things. However, with the population explosion following the industrial revolution until present times, the diversified and intensified activities of mankind have often interfered with this natural order. Those unwisely directing our societies for their self-interest look upon Nature as their personal domain and boundless resource to profit by stimulating and feeding our insatiable appetite for material-based gratification. The misguided struggles to eke out a living of the over-populated masses of people can overwhelm Nature's capacity to sustain them.

We are witnessing daily the consequences of this discord with Nature by the desecration of our life-supporting environment. Today it is the gigantic Dorian Hurricane that totally destroyed inhabited islands of the Bahamas, followed by widespread damage to the Southeastern coastal areas of the USA. And it is only the middle of the hurricane season In light of the increasing frequency and intensity of such storms world-wide over the past few years, attributable to human-influenced global warming, should those islands rebuild or be abandoned?

We are also confronted with on-going and recent unprecedented forest fires in many regions of the world - particularly now in the Amazon rainforest, which is described as the "lungs of the world" since, by its growth, it accounts for at least 20% of the CO2 sequestered from the Earth's atmosphere. The fires release significant amounts of CO2 back into the atmosphere, worsening the universal global warming phenomenon, the ultimate crisis of the world.

How to deal with all this? No prevailing political establishment offers the necessary solutions. A higher authority is needed, guided by our best science and technology, empowered to command the massive world-wide effort essential to combat global warming. Such an authority could be a first step towards establishing an effective world government that promotes international standards of justice in all matters.

The rationale for such an institution, other than the sheer necessity of restoring the health of our environment for our survival, lies in the concept of Nature as a divine gift to be shared universally by all its inhabitants. National and state boundaries, although useful for purposes of regional government, are not natural boundaries and cannot claim absolute dominion of the land as if detached from the rest of the world. What happens ecologically in one part of the Earth may affect the entire Earth, as we are now experiencing. So, in the Amazon, the fires consuming the rainforest are not the responsibility solely of Brazil. Nor is the CO2 exhaust from our fossil fuel-burning power plants solely the business of our country or of the owners of those facilities.

As conceived here, a World Environmental Authority would have oversight of all actions throughout the world affecting pollution and the global warming crisis. It would establish standards and timetables for remedial procedures adequate to meet the requirements according to current science, and would monitor the progress of its programs. It would assign costs to nations for research and investment in such procedures. It would determine responsibility of nations according to their contribution to global warming and environmental deterioration, and would set costs of reparations for damages suffered by victim nations caused by intensified floods and storms, etc. It would establish world sanctuaries to protect existing forests and accommodate vast reforestation of the Earth. It would develop educational programs that would reach out to all people whose activities contribute to global warming. Only by such a mandate can we assume the continuity of a flourishing civilization on Earth.

Related Topic(s): Environment; Lies; Nature, Add Tags
Add to My Group(s)
Go To Commenting
The views expressed herein are the sole responsibility of the author and do not necessarily reflect those of this website or its editors.