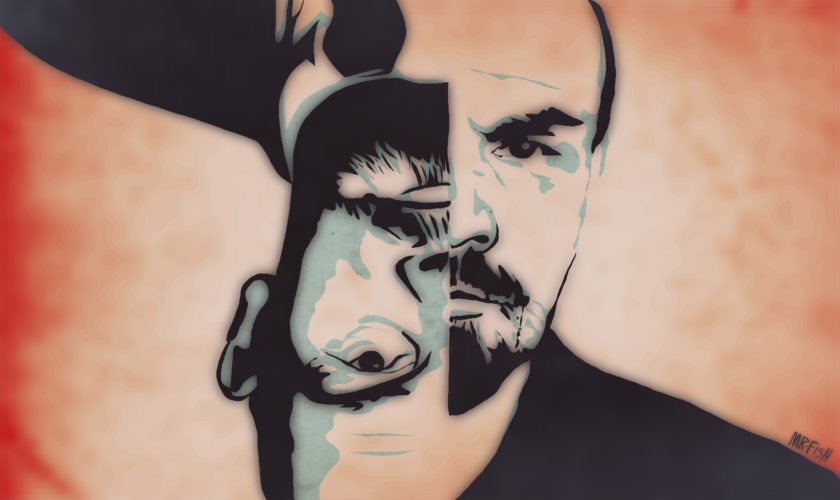 Vladimir Lenin has two legacies. One is the brilliant revolutionary tactician. The second is Lenin the New Czar. He was, ironically, Russia's most fervent champion of the very thing he eradicated -- revolutionary anarchy. His pamphlet "The State and Revolution" was an unequivocal anarchist manifesto, with Lenin writing that "as long as there is a state there is no freedom; when there is freedom there will be no state." But Lenin in power, like Leon Trotsky, was an opportunist who made promises, such as "all power to the soviets," that he had no intention of keeping. He employed political terror, widespread arrests and executions to crush the autonomous, self-governing soviets and workers committees. He led a centralized, autocratic ruling elite. He criminalized dissent, outlawed competing political parties, muzzled the press and instituted a system of state capitalism that stripped workers of their autonomy and rights. He, like Maximilien Robespierre, may have thought of himself as an idealist, but one of his estranged comrades, Angelica Balabanova, playing on a line from Goethe, declared that he "desired the good " but created evil." Stalinism was not an aberration. It was the natural heir of Leninism.

In power, as Rosa Luxemburg pointed out in "The Russian Revolution and Leninism or Marxism?" Lenin became the enemy of democratic socialism. He turned to the fanatic Felix Dzerzhinsky, the head of the newly formed Cheka, which during the first year of the revolution officially executed 6,300 people, which I suspect is a huge underestimate. This was the same Lenin who in November 1917 said: "We do not apply terror as did the French revolutionaries who guillotined unarmed people, and I hope we shall not apply it." The anarchist Mikhail Bakunin warned, presciently, that Marxists proposed to replace the capitalist with the bureaucrat. The Marxist society, he said, was nothing more than capitalism under centralized state management and it would, he said, be even more oppressive. This is why Noam Chomsky, correctly, calls Lenin the dictator a "right-wing deviation" and a "counter-revolutionary."

But there is no denying Lenin's brilliance. He redefined the political landscape of the 20th century. Decades after the Russian Revolution, in Spain, China, Cuba, Vietnam and South Africa oppressed peoples looked to Lenin and the revolution for inspiration. The social inequality and destruction of democratic institutions wrought by neoliberalism and the corporate seizure of power in our own time give relevancy to Lenin, who was examining many of the same questions about despotism, imperialism and capitalism. Lenin the revolutionary has a lot to teach us. He, like John Dewey, understood that as long as the capitalist class has control of the means of production no real democracy will ever be possible.

Lenin was acutely aware that revolutions occur because of spontaneous combustions that no one, including the revolutionaries, can predict. The February 1917 revolution was, like the French storming of the Bastille, an unexpected and unplanned popular eruption. As the hapless Alexander Kerensky pointed out, the Russian Revolution "came of its own accord, unengineered by anyone, born in the chaos of the collapse of Tsardom." This is true for all revolutions. The tinder is there. What sets it alight is a mystery.

The key to success -- this too is true for all revolutions -- is the refusal by the police and military, as occurred in Petrograd, to restore order and defend the old regime. Trotsky asserted that decayed regimes inevitably elevate leaders of stunning incompetence, corruption and imbecility, figures like Czar Nicholas II and Donald Trump. Even the elites, in the end, do not want to defend them.

The ossified systems of governance -- evidenced in the United States by our corporate-managed elections, our dysfunctional Congress, our commercialized press and our failed judiciary, which just legalized gerrymandering, an updated version of Britain's 19th-century "rotten borough" system -- are transparent puppets of the ruling cabal. Reform through these structures is impossible. This understanding creates a huge divide between the liberals, who hold out hope for reform -- you can see them once again foolishly investing time and energy in the Democratic Party -- and revolutionaries who seek not to placate or work within the system but to destroy it.

Lenin, like Karl Marx, understood that revolutions were not made by the lumpenproletariat. The lumpenproletariat are more often the enemy of revolution and the natural ally of fascists. They gravitate to reactionary armed vigilante groups, lured by the intoxication of violence, and build their warped ideology around conspiracy theorists and white supremacy. We see this among some Trump supporters and among white militias and hate groups. Lenin had a temperamental dislike of intellectuals, but he knew there was no other class that could shape and lead a revolutionary movement. This is why he relied so heavily on intellectuals such as Trotsky and Lev Kamenev, both of whom would be liquidated by Josef Stalin.

Revolutionaries, Lenin said, must be constantly self-critical and self-reflective. They must closely examine and learn from failures and defeats. They must be steeped in history, philosophy and the study of economics and culture. They must have a single-minded devotion to the cause, a disdain for personal security, an iron discipline and adherence to the party hierarchy, a slavish devotion to duty, and the ability to submerge their personalities into the group. Revolutionaries, however utopian their ideals, must also be political realists. Lenin disdained doctrinal purity, reminding his followers that "theory is a guide, not a Holy Writ." He knew, however, that most intellectuals -- he and Trotsky being exceptions -- lacked the ability to act quickly and decisively. This would explain why Lenin in power turned increasingly to thugs such as Stalin and Yakov Sverdlov, who oversaw the execution of the deposed czar and his family. Trotsky, for all his brilliance as an orator and the commander of the Red Army, had little interest in the mundane day-to-day mechanics of governing, a deficiency that would see Stalin push him from power, force him into exile and eventually send a secret agent to Mexico to plunge an ice pick into his head.

Revolutions are invariably led by messianic leaders such as Cromwell and Robespierre who have the strange combination of high ideals and, as Crane Brinton writes, "a complete contempt for the inhibitions and principles which serve most other men as ideals." These revolutionary leaders are not, Brinton points out, Plato's philosopher-kings, but philosopher-killers. These qualities allow them to sweep aside the moderates, who are given nominal power after a revolution, and forge revolutionary parties into effective machines. These qualities allow them to crush the forces of reaction that inevitably rise up to destroy the revolutionary order. Lenin and Trotsky had to swiftly mobilize to fight the czarist White armies and their foreign allies on a dozen fronts shortly after taking power.

Mass uprisings, Lenin understood, provide fleeting moments that if not seized by the revolutionary may never again occur. In these moments the revolutionary must skillfully exploit the self-destructive delusions that blind and paralyze the ruling elites and ride the wave of unrest to power. Timing was all, Lenin repeated monotonously. At timing, Lenin was a master. "There are decades when nothing happens -- and there are weeks where decades happen," he wrote.

Lenin abhorred anarchist violence, the "propaganda of the deed." The anarchist assassinations of czars, princes, empresses, presidents and prime ministers, which he dismissed as acts of neurotic self-indulgence, never had and never would, he pointed out, instigate a popular uprising. Terrorism, he wrote, quickly demoralizes those who practice it and destroys the revolutionary group that resorts to it. He would have excoriated the adolescent vandalism and lack of coherent organization and ideas that define the black bloc and antifa. Lenin called such renegade anarchists "liberals with bombs" because they, like liberals, believed that propaganda alone, of deed and word, would bring about radical change. As Lenin pointed out, terrorism and violence only frightened the population, demonized and isolated the revolutionaries and legitimated state repression. Violence was never a substitute for mass mobilization. It was never a substitute for the long and tedious work of building a revolutionary political party. And without a revolutionary party, Lenin warned correctly, revolution was impossible.

"The utter uselessness of terror is clearly shown by the experience of the Russian revolutionary movement," Lenin wrote, although his own brother was executed in a failed plot to assassinate the czar. "... [I]ndividual acts of terrorism ... create only a short-lived sensation, and lead in the long run to an apathy, and the passive awaiting of yet another 'sensation.' "

Revolutions may be made by militant minorities, but their power comes from articulating the conscious aspirations of most of society. The obsession with specific ruling figures, rather than the structures of repressive power, divert attention from the most important targets. Lenin referred to the czar as "the idiot Romanov" and told his fellow Bolsheviks he was a person of little consequence. He would have dismissed our preoccupation with Donald Trump. Corporate totalitarianism with its wholesale surveillance, endless wars, militarized police, transference of wealth upward, austerity programs, and collapse of infrastructure and basic social services -- from education to health -- ecocide, punishing debt peonage and disempowering and impoverishment of workers all predated Trump. Mike Davis in "Prisoners of the American Dream" illustrates how waves of state violence and repression against the working class and the left by Democratic and Republican administrations have effectively pre-empted the emergence of socialism.

Related Topic(s): Lenin; Neoliberalism; Propaganda; Revolution; Stalin; Uprisings; Violence, Add Tags
Add to My Group(s)
Go To Commenting
The views expressed herein are the sole responsibility of the author and do not necessarily reflect those of this website or its editors.