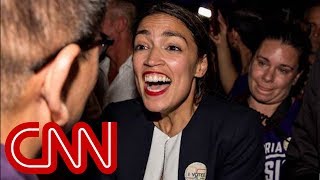 People are leaving the Democratic Party in droves, as the sham of the Two-Party System looks ever more like the single corporate party that it is. The Walk Away movement is growing. What might the Party, now under the leadership of Tom Perez, do in such a situation? And suddenly -- virtually overnight and as if by magic! --, There is Alexandria Ocasio-Cortez, everything a sinking party could ask for: young, female, minority, just dripping with boatloads of Obama-like charisma.

Pardon the cynicism of a senior citizen, but I think I've seen this story before. When Bill Clinton chose as his running mate Al Gore, at the time a high-profile environmentalist, I believed with such fervor that I worked for his election. Thereafter, when Clinton and his wife became central figures in establishing the corporate Democratic Leadership Council, thereby embracing the same corporate money spigot enjoyed by Republicans, and at the same time turning their backs on workers and their unions, it was clear we'd been had. Clinton ended "welfare as we know it", and his dissolving of the wall between commercial and investment banks quickly turned Wall Street into a casino that could gamble using people's savings.

Then I walked door-to-door for silver-tongued Obama. Again I believed. Nobody during my adult life who aspired to the Presidency had enjoyed such a surge of support from the country. He could have done anything, but once in office he was quick to assure the Wall Street power bloc that had brought millions to financial ruin that he stood between them and the pitchforks of the masses. His use of the Espionage Act to attack whistleblowers was unprecedented. During his eight years there was the greatest upward surge of wealth to the "One Percent" in history and a continuation of wars in the Middle East. He ignored the public's plea for a single-payer health system, devising instead "Obamacare", a contorted system guaranteeing the continued good health of profiteering insurance companies.

Then Bernie Sanders generated a small "r" revolution" into the works, and again I believed. Just imagine what might have been had he joined with Jill Stein of the Green Party. The lock enjoyed by the Two-Party scam may very well have been broken, or at least badly damaged, in a Revolution actually worthy of the word. Certainly no outcome could have been worse than our current situation. Here in Wisconsin, and in other states as well, the Democratic Party stole the primary for Clinton, and Sanders failed to challenge the thefts. Now, burned into my memory is the image of a smiling Sanders on stage with Hillary Clinton, telling his supporters they must now support Hillary, the embodiment of all that Sanders claimed to oppose.

Alexandria Ocasio-Cortez is still an unknown. She seems an honest, idealistic person, but she and her captivating image certainly would be manipulated by the old hands in the Democratic Party. She has already expressed clearly her exasperation that Joe Crowley, whom she beat in her primary, is "" mounting a 3rd party challenge against me and the Democratic Party and the will of @NYWFP". The link goes to a New York Times piece headlined "Ocasio-Cortez Highlights How Third-Party Quirks Can Muddle Elections". Third party 'Quirks'?. Her anti-third party stance, as stated in her tweet, is support for a Two-Party System that ever more people are coming to understand is rigged. She will run as a democrat, which means she will be taking the party's money, and that will oblige her to abide by the party's demands and limitations.

I no longer believe. Tom Perez, Chair of the Democratic National Committee, sweating bullets over the legions now "walking away" from the Party, glommed onto Ocasio-Cortez like a drowning man on a life ring and declared her "the future of the Democratic Party". Really! The Clinton and Obama administrations had 16 years to establish a civilized healthcare system of the sort enjoyed throughout the rest of the industrialized world, and the best they could come up with was Obamacare. Now, the head of the DNC tells us that a newcomer that has single-payer as her primary aim is the Party's future? Very doubtful. They will hobble her even as they showcase her to the young voters they are so obviously trying to woo.

This drama looks too familiar. In fact, the Democratic Party has no intention of supporting a single-payer/Medicare-for-all-plan, because the health insurance industry system now in place, one of the most idiotic, heartless and lucrative arrangements ever devised by a society, has paid democrats to keep it in business. The Ocasio-Cortez blitz is too ideal an injection for what an ailing Party's doctor might prescribe, too much like an old Hollywood script for someone who has seen the movie before.

Related Topic(s): Charisma; Corporate; Green; Health Care Universal - Single Payer; Healthcare; History; Obamacare, Add Tags
Add to My Group(s)
Go To Commenting
The views expressed herein are the sole responsibility of the author and do not necessarily reflect those of this website or its editors.