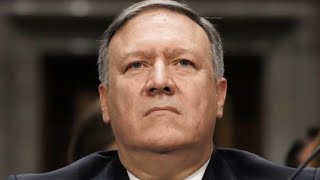 Former Congressman and CIA Director Mike Pompeo was confirmed Thursday afternoon by the US Senate to be secretary of state. The former Army tank commander, a supporter of torture and unlimited domestic spying, will now hold the top position in the Trump cabinet, as well as being fourth in line of succession to the presidency.

The installation of Pompeo as head of the State Department in place of Rex Tillerson follows President Trump's replacement of Gen. H. R. McMaster with former Bush administration official and Iraq War conspirator John Bolton as national security adviser. Both Pompeo and Bolton have called for war against Iran and North Korea. They form a new foreign policy team that is even more reckless than the preceding one. Their installation signals an accelerated drive to a wider war in the Middle East and military conflict with Russia and China.

Pompeo embodies the link between imperialist war-mongering and political repression within the United States. He has defended waterboarding and the Bush administration's CIA torture program. In a speech last year he called WikiLeaks a "non-state hostile intelligence service." He has called for the trial and execution of whistleblower Edward Snowden and advocates an expansion of the National Security Agency's illegal mass surveillance program.

Pompeo was immediately sworn in by ultra-right Supreme Court Justice Samuel Alito. The new secretary of state boarded a plane to fly overnight to Brussels, where he will represent the US government at a NATO foreign ministers conference. This assemblage will discuss actions against Russia over the false charges of poisoning a former British double agent, Sergei Skripal, as well as Russian support for Syrian President Bashar al-Assad, whose regime was the target of US, French and British missile strikes earlier this month.

Russia and Syria are only two of a series of impending confrontations in which Pompeo will play a central role:

On May 12, President Trump is expected to formally disavow the Iran nuclear agreement, putting the US on a collision course both with Iran and the five other countries that signed the deal, to which Iran has scrupulously adhered.

On May 14, the State Department, which Pompeo now heads, will officially transfer the US embassy in Israel from Tel Aviv to Jerusalem, a deliberate provocation against the Palestinian population of the West Bank and Gaza, which regards East Jerusalem as its historical capital.

On May 20, Venezuela holds its presidential election. The State Department is expected to denounce the predicted victory of incumbent Nicholas Maduro and declare the election fraudulent, setting the stage for economic sanctions or even a boycott of Venezuela's oil exports by the US, its largest customer.

In late May or early June, Trump is to hold the summit meeting with North Korean leader Kim Jong-un, which was prepared by Pompeo's secret visit to Pyongyang earlier this month. In the event that the summit is called off, or breaks up without progress, the US government will accelerate its plans for a military strike against North Korean missile and nuclear test sites or an attack against the regime as a whole.

The Senate approved Pompeo's nomination by a vote of 57-42, with six Democrats and one independent who caucuses with the Democrats supporting him. But the role of the Democrats was far more important than these numbers might suggest. Without the support of Democrats at key moments, Pompeo's confirmation was in serious question.

After his appearance before the Senate Foreign Relations Committee April 12, where he adopted the posture of a "moderate," foreswearing his past record of warmongering against Iran and North Korea, Senate vote counters found that his nomination was in danger of being defeated.

With Republicans holding only a narrow 51-49 margin and Senator John McCain absent due to brain cancer, libertarian Rand Paul of Kentucky threatened to tip the balance against Pompeo, declaring he would oppose the CIA director because of his well-publicized defense of torture. If Paul joined 49 Democrats in opposing Pompeo, the nomination would fail by a vote of 50-49.

With the nomination assured, Rand Paul dropped his token opposition and announced that he too would vote to confirm. Pompeo actually won a slightly larger majority than his predecessor Tillerson, who was confirmed by a margin of 56 to 43.

Patrick Martin writes for the World Socialist Website (wsws.org), a forum for socialist ideas & analysis & published by the International Committee of the Fourth International (ICFI).
Related Topic(s): Confirmation; Democratic Sellout; Military; Party Politics Democratic; Secretary Of State; Secretary Of State Mike Pompeo; Syria, Add Tags
Add to My Group(s)
Go To Commenting
The views expressed herein are the sole responsibility of the author and do not necessarily reflect those of this website or its editors.