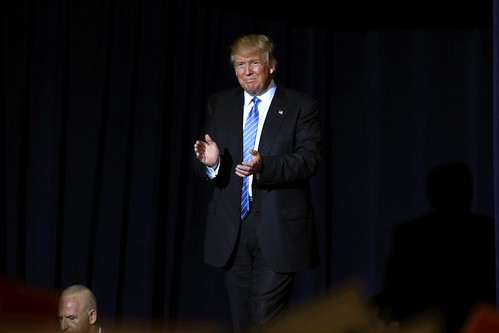 The New York Times said this week that President Trump's insistence that former president Barack Obama tapped his phone and that the CIA and FBI are leaking information to embarrass him and his administration is evidence that Trump believes there is a "deep state" within the U.S. government working against his presidency.

The tone of the article is mocking, and the Times dutifully interviews the likes of former NSA and CIA director Michael Hayden and a handful of think tank nobodies who served in the Obama and Bush White Houses. Indeed the Times also says that the term "deep state" is used frequently by Breitbart, the alt-right "news" site run by presidential counselor Steve Bannon, and by other right-wing media sites.

But is it so hard to believe that there are elements of the government that don't like the fact that Trump is rocking their boat or not allowing them primacy in policy-making, a status they enjoyed under both Obama and Bush? As Intercept columnist Glenn Greenwald noted, disliking and distrusting Trump and disliking and distrusting the CIA are not mutually exclusive. It's not a zero-sum game. Same with the FBI. It's possible to have a scenario with no good guy.

First, what is a "deep state?" It is generally defined, according to the Times, as "a shadowy network of agency or military officials who secretly conspire to influence government policy. It is more often used to describe countries like Egypt, Turkey, and Pakistan, where authoritarian elements band together to undercut democratically-elected leaders." I think that description is a gross generalization. And I think the CIA, NSA, and FBI are far more sophisticated than to be so obvious as to invite comparisons to Egypt, Turkey, and Pakistan.

One of the things that most observers don't understand is that the CIA will do anything -- anything -- to survive. All CIA officers are taught to lie. They lie all the time, about everything, to everybody. And they justify it by trying to convince themselves that they are doing it in the national interest, for national security. From my very first day in the CIA, it was drilled into me, as it is into every other employee, that "the primary mission is to protect the Agency." That was the mantra. Couple that with the CIA's ability to intercept and take over virtually any communications device, and you have a Frankenstein monster. Is it really hard to believe that such an organization would resist a president who challenged it? Is it hard to believe that it would do so surreptitiously? I don't think so.

We can say pretty much the same things about the NSA. Thanks to Ed Snowden, and despite NSA protestations to the contrary, that agency has been spying on American citizens at least since the September 11 attacks. Again, is it so hard to believe that if NSA officials didn't like a new president or his politics that they would spy on that new president, whom they may believe was a threat to their continued work?

And then there's the FBI, an organization that has the power to utterly ruin anybody it wants just by initiating an investigation or leaking that somebody is a "person of interest," whatever that means. The FBI is or can be the deep state's secret police. After the Hoover years, COINTELPRO, spying on American peace and civil rights activists, are we just supposed to let them go about their business without wondering if, perhaps, they are part of a movement to undermine our democracy?

Even that bastion of conservatism, The Wall Street Journal, said on Friday that James Comey, the FBI's director, has to go. The Journal editorial board said, "Mr. Comey seems to regard himself as the last independent man in Washington, whose duty is to stand his ground amid undeserved slings from the Democrats and arrows from the Republicans. And especially so now amid the controversy over allegations of Russian intervention in the 2016 election. Something larger is at stake here than Mr. Comey completing his tenure. The decisions he made as director during the election damaged the credibility of the FBI in the eyes of the American public. The bureau's institutional integrity needs to be repaired. He should step down now so that the nation does not have to wait 6-1/2 years to begin the process of getting unstuck from the Comey years."

This is not a traditional conservative/liberal, Republican/Democrat issue. Again, it's possible to believe one side while not necessarily liking him or it and vice versa. James Carafano of the conservative Heritage Foundation probably encapsulated it best. He told the Times, "Just because you see things like leaks and interference and obstruction doesn't necessarily mean there's a deep state. That's something we've seen before, historically, and it's nothing new. What would be different is if there were folks from the previous administration that were consciously orchestrating, in a serious way, inside opposition to the president. It's hard to know: is this Trump using some strong political rhetoric or an actual thing?"

Related Topic(s): CIA; Deep State; FBI; Fbi Director James Comey; Trump Presidency, Add Tags
Add to My Group(s)
Go To Commenting
The views expressed herein are the sole responsibility of the author and do not necessarily reflect those of this website or its editors.