Puerto Rico remains devastated, but few in Congress or the White House seem to consider its reconstruction a priority. 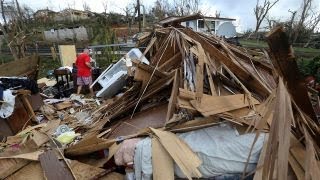 Painful truths sometimes become so obvious that they must be faced. Let's finally be honest. Even though I forced you to marry me, I never loved you -- not even on our wedding day. I didn't know a thing about you, so how could I? You always seemed strange, with your own language and habits. Over the years, we kept our distance. I tried to ignore you. Now, suddenly, you're in trouble and want my help. Forget it! I'm not wasting my money on a spouse I picked up on a beach by accident and never cared for.

This has been Washington's attitude toward Puerto Rico since Hurricane Maria tore across the island eight months ago. Its relief efforts have been reluctant, underfunded, and painfully slow-moving. Puerto Rico remains devastated, but few in Congress or the White House seem to consider its reconstruction a priority. They presumably understand that Puerto Rico is part of the United States and that its residents are American citizens, but nonetheless they treat the island like a foreign country that Washington has no obligation to help.

This is hardly new. Both on the island and on the mainland, Puerto Ricans cling fiercely to their heritage. They are Hispanics, culturally closer to Cuba and the Dominican Republic than to the United States. When asked their nationality, they often answer "Puerto Rican" rather than "American." The United States has never made a serious effort to assimilate them, and many of them have no interest in being assimilated. Washington's response to Hurricane Maria vividly shows how unsuccessful 120 years of American rule over Puerto Rico have been.

The scale of destruction wrought by the hurricane is difficult to fathom. Most of the 3.4 million islanders were without power for months. Hundreds of thousands still are. Eighty percent of farm crops were destroyed. In some towns, nearly every building was blown away or severely damaged. Many schools and hospitals have closed. Jobs vanished. Over 100,000 people have fled to build new lives on the mainland, mainly in Florida. At least that many more are expected to do so this year.

This catastrophe came in the wake of another that was man-made. For years Puerto Rico has been governed by venal and corrupt leaders. Their misrule has starved the island of investment and driven it into bankruptcy. Bankers have reaped rich profits -- nearly half a billion dollars for Barclay's and tens of millions for J.P. Morgan, Banco Santander, and Morgan Stanley -- from an island where 44 percent of the population lives in poverty. A study by the Economist Intelligence Unit predicts that this year, Puerto Rico's economy will contract by a stunning 8 percent -- a more drastic fall than any other on earth. The only two other places where economic growth is expected to be less than zero in 2018 are Venezuela and Equatorial Guinea.

President Trump visited Puerto Rico in October and told residents that theirs was not "a real catastrophe like Katrina," the hurricane that hit New Orleans in 2005. His administration has slowly begun to increase its aid, but without any sense of urgency. The outraged mayor of San Juan, Carmen Yuln Cruz, a Boston University graduate, called this "something close to a genocide." Trump replied with characteristic grace, blaming the failure of relief efforts on "poor leadership by the Mayor of San Juan" and on Puerto Ricans who "want everything to be done for them."

The root of this crisis lies in the nature of Puerto Rico's relationship to the United States. In 1898 Puerto Rico accepted an offer of autonomy under Spanish rule. The American consul reported that citizens were "jubilant over the news." They went to the polls and elected an impassioned newspaper editor, Luis Muñoz Rivera, to head their new government. Unfortunately, however, the United States was then launching a war in Cuba. Imperialists in Washington noticed that Puerto Rico is near Cuba, and decided to seize it. On July 25, 1898, American troops landed at Gua'nica, on the island's south coast, and raised the American flag. From there they marched to San Juan and deposed the newly elected government. Three months later the United States officially annexed Puerto Rico.

Over the decades that followed, Puerto Rico fell into poverty. Small coffee farms that supported many families were replaced by plantations run by American sugar and fruit companies. The island's penury remained out of American sight and mind until a Communist revolution in Cuba led to vast improvements in health care, education, and social welfare there. That shamed Washington into action. Congress approved tax breaks intended to draw corporations into Puerto Rico. The incentives worked for a while, but growth was artificial and could not be sustained. Puerto Rico slipped back off the American radar screen. Hurricane Maria briefly brought it back, but interest has again faded.

Puerto Ricans never asked to become part of the United States, and Americans never truly wanted them. The two were united in a marriage that more resembled a kidnapping. Affection was forced and sporadic. Nothing like love ever developed. The contempt with which the U.S. government has treated Puerto Rico in its hour of need reflects the failure of this union.

commondreams.org is a progressive publisher
Related Topic(s): Crisis; Genocide; Poverty; Puerto Rico Devastation, Add Tags
Add to My Group(s)
Go To Commenting
The views expressed herein are the sole responsibility of the author and do not necessarily reflect those of this website or its editors.