* With credit to the great anti-nuclear war television movie of the 1980's, of the same name. A Trump win tomorrow, in the long term, could have as much impact on the future of humanity --- think uncontrolled climate change --- as would nuclear war (which he could well also unleash in a moment of panic).

On November 5, 2018, Nate Cohn of The New York Times published an article that pointed out that while the Democrats would probably "win" the overall national vote, by a wide margin, because of Repub. gerrymandering and voter suppression, especially affecting certain districts, they might not actually take back the House. Today, November 6, 2018, Paul Krugman of The New York Times published an article in which, I am perversely delighted to say, he supports the position that I have been taking on the pages of OpEdNews and elsewhere for quite some time, that Trump is an authoritarian/autocrat (and Krugman has also used the word "fascist" in recent months) and that if he wins, he and the Repubs. will be moving the nation in that direction as quickly as they can.

And Now to the Original Column

In my view, the mid-term election of 2018 will go down in U.S. history as the most important one since the Presidential election of 1860. That one, a four-party contest --- Republican, Northern Democratic, Southern Democratic, and Constitutional --- as is well known was won by a very different Republican Party than today's version. As is also well-known, the outcome, the win by the Republicans, whose platform supported the maintenance of chattel slavery in the states in which it already existed but opposed any further expansion to the Western Territories, led to the secession from the Union by most (but not all) of the slave states, and then the First Civil War. This election has only two parties: Donald J. Trump and Everyone Else.

Thus tomorrow's election will not be considered as just another mid-term election. Customarily, in those the party that controls the Congress and the White House customarily loses seats in one or both Houses of the former, possibly with a transfer of power there. In the last several weeks President Trump has managed to make this election, rather, about him, not his party. At many of his rallies, he barely mentions the candidate(s) for whom he is supposedly coming to offer support. Despite all of the serious issues facing the nation aside (issues that I reviewed in my previous column, "There is No Middle Ground"), by the force of HIS politics and policies, his personality and how he fights his battles, Trump, up, Trump down, or somewhere in-between is now THE issue. It can indeed be viewed as a PLEBISCITE ON TRUMP. 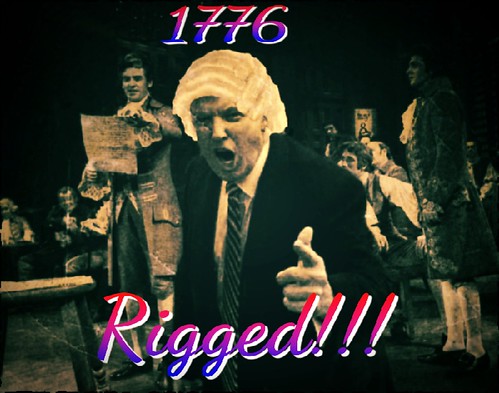 Trump. This one says it all!
(Image by IoSonoUnaFotoCamera)   Details   DMCA

Yes, by the use of the completely-divorced-from-reality, built-on-lies, racist/xenophobic "caravan" issue, Trump has been able to make the election about him, not about the Congress and the distribution of power between the two parties, in the two Houses, except as the outcome will affect him and his future. Either Trump will win, or claim that he has won, or Trump will lose (and possibly, given who he is, still claim that he won). And, for better or worse, for a variety of reasons, the liberals and the Left will go along with this interpretation. So let's consider the alternatives.

I. If Trump wins (that is retains control of at least the Senate, which he will claim as a win. For what he will do if the Democrats take over the House, see below).

A. He will take credit for every single national, state and local office win the Repubs. managed to achieve. Any losses will be blamed on the candidates and the Party support.

B. He will, seriously, launch the following Congressional agenda (most of which would require retention by the Repubs. of the House as well as the Senate, probably starting in the lame duck session):

2. Creation of a national libel law (libel law now being almost entirely the prerogative of the States). He would then use it to launch a tsunami of suits against "the [independent] media," with the support of the now-Trumpite littered courts, intended to cripple them, a primary objective of his from the time he began his campaign in 2015.

3. Primarily at the judicial level --- but hey, you never know --- making sure that the Dominionist Community (led of course by the Dominionist Mike Pence) is kept happy, with, for example: the reversal of Roe v. Wade (by a right-wing Supreme Court which is so dedicated to the maintenance of precedent [except when it isn't, as in "Heller," -- why not bring back "Lochner?"]) with the resultant criminalization of religious belief in the matter of the outcome of pregnancy, and the re-institution of functional discrimination against the LGBTQ community at a variety of levels, based solely on the support of a given religious belief, on the civil side of the law.

5. The end of any investigations of right-wing hate/violence/white-supremacy organizations (an initiative apparently already begun: https://shareblue.com/trump-administration-ending-countering-violent-extremism-program/).

6. The revocation of the of the Posse Comitatus Act, which prevents the use of the military for domestic purposes.

7. A gradual, further consolidation of Presidential authority in areas that have not traditionally considered to fall under the powers granted to the President under Article II of the Constitution, such as trying to repeal the "Birthright Citizenship" clause of the 14th Amendment by Presidential decree.

8. The "caravan" (possibly Trumpite funded --- now there's a conspiracy theory for you) will suddenly disintegrate and disappear into time, space, and history.

C. AG Sessions, DAG Rosenstein, Special Counsel Mueller, and FBI Director Wray will be fired, as quickly as possible. If one or more Senate confirmations are not forthcoming, Trump will make a series of Acting and Recess appointments

D. Legal measures will be immediately undertaken to prevent Mueller from sharing any of his findings with anybody. All Mueller convictions and indictments will be vacated.

E. The now Federalist/Heritage Foundation dominated Federal courts will support all of these actions.

F. A propaganda campaign based on the following principles adopted by some of history's great authorities on Lying and Propaganda will be undertaken (collected by my friend, Dr. Gary Kohls):

Ah, the Scottish Daily Mail. At last, a paper I can trust for its political neutrality. Get me Goebbels!
(Image by Ninian Reid)   Details   DMCA

"If you tell a lie big enough and keep repeating it, people will eventually come to believe it. The lie can be maintained only for such time as the State can shield the people from the political, economic and/or military consequences of the lie. It thus becomes vitally important for the State to use all of its powers to repress dissent, for the truth is the mortal enemy of the lie, and thus by extension, the truth is the greatest enemy of the State." -- Joseph Goebbels Joseph Goebbels, German Nazi Minister of Propaganda and Public Enlightenment

"The rank and file are usually much more primitive than we imagine. Propaganda must therefore always be essentially simple and repetitious. The most brilliant propagandist technique will yield no success unless one fundamental principle is borne in mind constantly... it must confine itself to a few points and repeat them over and over." -- Joseph Goebbels

"It also gives us a very special, secret pleasure to see how unaware the people around us are of what is really happening to them." -- Adolf Hitler

"What good fortune for those in power that the people do not think." -- Adolf Hitler

"Through clever and constant application of propaganda, people can be made to see paradise as hell, and also the other way around, to consider the most wretched sort of life as paradise." -- Adolf Hitler

Of course, a lot of this sounds familiar, doesn't it? But then, Ivana Trump did once toll us that Trump kept a copy of "Mein Kampf" on his bed stand.

II. If Trump loses (at least the House of Representatives):

A. He will blame everyone else, but most especially "the media" (except for the Propaganda Channel of course. But who knows, he might charge even them for "not doing a good enough job" for him).

B. He will claim that any losses, of any kind, were the result of voting by "illegal aliens," double-triple-or-what-have-you voting by his opponents, and other forms of voter fraud, which will be rooted out, finally. He will thus claim that he actually won.

C. The Repubs. will immediately launch every weapon they have, from use of the Congressional rules to filing numerous law-suits with a judiciary which they have loaded with far-Rightist judges, nominated by the Federalist Society and The Heritage Foundation. Their goal would be to prevent the 116th Congress from ever convening. For they know, were it to convene, what would happen with Mass Investigation, even on just the House side. Many of us around the country would be celebrating about the Trumpites' cooked goose, but I think that that celebration would be premature, unless the Democrats do take the House and 116th Congress does convene.

D. The Democrats do have grand plans for House investigations., should they manage to take control of the House. Either because the Repubs. retain the House, or because Trump is successful in preventing the 116th Congress from ever convening, they may never get to implement them.

E. Trump will have absolutely consolidated the Congressional Republican caucus behind him. Even if the 116th does convene and the Democrats are able to start their planned investigations, the Repubs. will do everything they can to frustrate that effort. So, in the end, such a loss may not be such a loss, after all.

In the light of this reality, one should very carefully consider one's vote in tomorrow's election. In my view, think Popular Front.

Steven Jonas, MD, MPH, MS is a Professor Emeritus of Preventive Medicine at StonyBrookMedicine (NY) and author/co-author/editor/co-editor of over 35 books. In addition to his position on OpEdNews as a "Trusted Author," he is a Senior Editor, (more...)
Related Topic(s): Appointments; Congress; Conspiracy; Election; History; Hitler; Investigations; Judiciary; Legislation; President; (more...) Propaganda; Rallies; Truth, Add Tags  (less...)
Add to My Group(s)
Go To Commenting
The views expressed herein are the sole responsibility of the author and do not necessarily reflect those of this website or its editors.