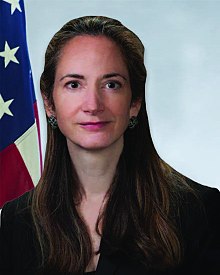 Former acting CIA Director Mike Morell, who has disingenuously argued for years that he had nothing to do with the agency's torture program, but who continued to defend it, has taken himself out of the running to be President-elect Joe Biden's new CIA director.

The decision is a victory for the peace group Code Pink, which spearheaded the Stop Morell movement, and it's a great thing for all Americans. Now, though, we have to turn our attention to Biden's nominee to be director of national intelligence (DNI), Avril Haines.

Haines is certainly qualified on paper to lead the Intelligence Community. A longtime Biden aide, she has the president-elect's confidence. But that's not good enough. Haines is exactly the kind of person who shouldn't be in a position of authority in intelligence. She is the kind of neoliberal intelligence apologist whom so many of us have opposed for so many years. Don't just take my word for it, though. Look at her record.

Haines first began working for Biden when she served as deputy general counsel of the Senate Foreign Relations Committee when Biden was its chairman. When Biden became vice president in 2009, Haines moved to the State Department, where she was the assistant legal adviser for treaty affairs. After only a year, she moved to the White House, where she became deputy assistant to the president and deputy counsel to the president for national security affairs, the National Security Council's chief attorney.

That's quite a position. What it means was that her job was to legally justify President Barack Obama's decisions on such intelligence issues as drone strikes and whether to release the CIA Torture Report. She served there under CIA Director John Brennan. Obama apparently liked the job she did for him because in 2013, he named Haines deputy director of the CIA (DD/CIA).

Haines was the first woman to be named DD/CIA, and she served again under Brennan, who proved time and again that he was no fan of congressional oversight. Haines's attitude was similar to Brennan's: The CIA was going to do what it was going to do, and she would make no apologies for it.

There were three controversial areas where Haines made a name for herself and for which she should have to answer in a confirmation hearing: The CIA's refusal to release the Senate Torture Report and the decision to hack into the Senate Intelligence Committee's computer system; the CIA's decision to not punish those officers who carried out the hack and who killed and tortured prisoners beyond even what the Justice Department said was permissible; and the government's drone program, in which hundreds, perhaps thousands, of civilians were killed.

Related Topic(s): Biden Appointments; CIA; HACKED; Intelligence; National Intelligence Command; National Security; National Security Adviser; Past Presidents, Add Tags
Add to My Group(s)
Go To Commenting
The views expressed herein are the sole responsibility of the author and do not necessarily reflect those of this website or its editors.