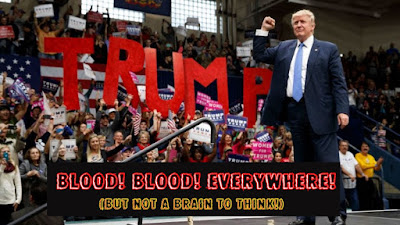 While Trump smiles about his approval ratings and scorns potential investigations, the numbers of people at risk and deaths continue to be greater than they could have been under a more competent leadership. 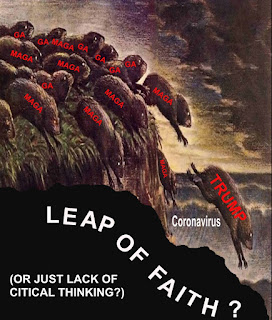 "Blood on his hands"

The months the administration wasted with prevarication about the threat and its subsequent missteps will amount to exponentially more COVID-19 cases than were necessary. In other words, the president has blood on his hands.

While the Boston Globe editorial board piece was a dignified hit piece that came too late, the "take no responsibility" video ad put out by Priorities USA may be a warning: more ineptitude is yet to come.

The Priorities ad the original was updated with higher casualty figures is only the start of a Democratic effort to convince voters that the president who rode a wave of controversy, disruption and showmanship to win the White House in 2016 is ill suited to lead the country through a global pandemic and an economic meltdown.

And yet, after the virus crisis hit, Trump's approval rating INCREASED. From 42% to 49%. So far, Trump hasn't capitalized o it, but the road to re-election is still long, and he'll probably make something of the bump come the debates (which, coronavirus aside, are in limbo since Trump is edging towards no debates). But his followers ...

Not so fast. According to political scientists the "bump" does not fair favorably to other disaster/crises presidents.

One group of people not puzzled by the seeming paradox: political scientists. It turns out that an approval bump due to major crises or wars is one of the most consistent patterns in American politics. "It would have been amazing if Trump didn't get any rally," said Matthew Baum, the author of several academic books about public opinion. The surprising thing, rather, is how small the bump has been.

Rev. Dan Vojir is has been writing/blogging on religion and politics for the better part of ten years. A former radio talk show host (Strictly Books " Talk America Radio Network) and book publisher, Dan has connected with some of the most (more...)
Related Topic(s): Boston Globe; Corona Virus Coronavirus Covid-19; Donald Trump Supporters; Donald Trump Supporters; Jared Kushner; President Trump And Coronavirus Task Force News Co; Prioities Usa; Trump Approval Ratings; Trump Approval Ratings, Add Tags
Add to My Group(s)
Go To Commenting
The views expressed herein are the sole responsibility of the author and do not necessarily reflect those of this website or its editors.