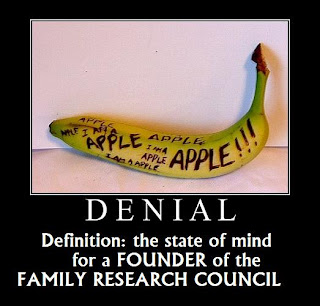 It Doesn't Get Any Bigger Than This!

[George} Rekers, a Baptist minister who is a leading scholar for the Christian right, left the terminal with his gay escort, looking a bit discomfited when a picture of the two was snapped with a hot-pink digital camera. Reached by New Times before a trip to Bermuda, Rekers said he learned Lucien was a prostitute only midway through their vacation. "I had surgery," Rekers said, "and I can't lift luggage. That's why I hired him." (Though medical problems didn't stop him from pushing the tottering baggage cart through MIA.)

And the Miami New Times has a wonderfully descriptive passage::

He [the rent boy] was soon followed out of customs by an old man with an atavistic mustache and a desperate blond comb-over, pushing an overburdened baggage cart.

Yes, if all of the circumstantial evidence is true, Rev. Dr. George Rekers will go down in hypocrisy history as the man who pulled the plug on the "ex-gay" movement and made a very serious dent in the armour of the Family Research Council. 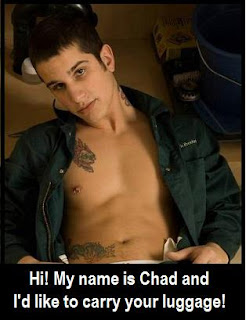 Now here's a man who is " a Distinguished Professor of Neuropsychiatry &amp; Behavioral Science Emeritus at theUniversity of South Carolina School of Medicine. Here is a man who became an ordained Baptist minister after getting his Doctor of Divinity at the University of South Africa. Who, along with James Dobson, founded the Family Research Council. Who has written many books, including: Shaping Your Child's Sexual Identity and Growing Up Straight: What Families should Know about Homosexuality. Who is on the board of Directors for NARTH, the organization that purports to turn gays into heterosexuals. And who has been an advisor to the White House and Congress, even testifying against gay adoption. According to the rent boy (known only as "Lucien"), Regers adopted a 16 year-old boy last year.

Poor Ted Haggard. He was only a cut-rate Paul Linde leading a mega-church, talking to (then) President George W. Bush weekly and president of the National Association of Evangelicals.

Regers' credentials beat him by a mile!!

This story is still on the newswires and hasn't been updated yet. In other words: STAY TUNED...

JOE MY GOD was able to connect with Regers via faceook.com. Check it out!

He further states that he "shared the Gospel of Jesus Christ with him ["Lucien"] in great detail," calling him his "travel assistant."

This looks comical because it IS comical: Regers thinks the world is going to believe that he ministers to young "escorts" while paying them to carry his baggage. For ten days. Repeatedly (one of his emails states that he's thinking of taking "another" trip to Rome). And gets photographed carrying the luggage himself.

So far, Family Research Council has refused to comment (probably to give some time for Tony Perkins to come up with some spin).

Comical or not, this is serious stuff: a respected leader of the "ex-gay" movement, an "expert" on "curing" homosexuality is allegedly caught traveling with hustlers and gives one of the lamest excuses heard in years. If FRC and the Christofascists have any sense, they will take time to think this one out. But they probably won't.

The statement and press release will be a hoot.

Rev. Dan Vojir is has been writing/blogging on religion and politics for the better part of ten years. A former radio talk show host (Strictly Books " Talk America Radio Network) and book publisher, Dan has connected with some of the most (more...)
Related Topic(s): Adoption; Christofascists; Family Research Council; Gay Adoption; George Rekers; Homosexuality; Hypocrisy; Narth; People Dobson James; Rentboy, Add Tags
Add to My Group(s)
Go To Commenting
The views expressed herein are the sole responsibility of the author and do not necessarily reflect those of this website or its editors.