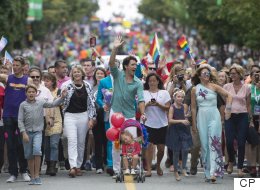 As Canada's Prime Minister Justin Trudeau dances and sways to the music and jubilation of Vancouver's Pride parade, many Canadians swell with pride, secure in the knowledge that we represent freedom, generosity of spirit, and cultural/religious pluralism. Surely, we possess all the attributes of a mature, democratic society.

Nothing could be further from the truth.

Instead of furthering the causes of knowledge, growth, humanity, and civilization, we are fostering barbarity and ignorance.

These are the forces growing in the Middle East, thanks to Canada's complicity in NATO, its support for Wahhabi Saudi Arabia, and its support for the mercenary terrorists invading and occupying Syria.

Islam is not the root of the destruction in the Middle East; we are.

All of this has been proven beyond a reasonable doubt, and yet Canada remains transfixed by fabricated mainstream media (MSM) stories that serve as the propaganda apparatus for Western-supported terrorists, including ISIS and all the terrorists invading Syria. The author writes in "The West's Establishment Lies And Crimes Are Leading Us To The Unthinkable":

"Ostensibly 'neutral' information sources are not neutral at all. So-called "Non-Governmental Organizations" (NGOs), including very governmental sources such as the National Endowment for Democracy (NED), the CIA, Mossad, etc., as well as oligarch- (ie, Soros) funded foundations, are all embedded with the terrorists, and these are the sources that are the foundation for corporate/mainstream media (MSM) 'news' stories.

"The White/al Qaeda Helmets, the Syrian Observatory for Human Rights (SOHR), and Avaaz are just a few of the many corrupt NGOs lying abot the War on Syria. Add to this Qatari-based Al Jazeera, and Western media's modus operandi of trotting out 'experts' who have conflicts of interest but who nevertheless pose as 'neutral' sources of information, and we see that the media serves as an agency for imperial war, rather than as an agency for truth and justice."

Most Canadians, captured by the propaganda, are immune to publicly available, evidence-based research, as they passively accept the comforting lies and illusions.

We are taught to hate Islam, and tacitly embrace Saudi Wahhabism, even as the truth resides in the genuine teachings of Islam -- and all the world's religions -- as best represented by the culture of Syria and its peoples, our fabricated "enemy".

The voice of truth and evidence-based reality is an enduring, slow-burning flame, not easily extinguished; unlike its counterpart, the voice of lies and deceptions, which burns intensely for a time, but then devours itself.

The truth in Syria is that there are no "moderate rebels", and that the "opposition" does not include gun-toting terrorists who occupy sections of Syria, murder civilians, launch Hell-Cannon ordnance, launch toxic/poison gas rockets, and attempt to impose Wahhabist teachings in occupied areas. Professor Chossudovsky correctly explains:

"(The) US counterterrorism bombing campaign under "Operation Inherent Resolve" does not target terrorists.

Quite the opposite. Both ISIS-Daesh and Al Nusra are protected by the US led coalition.

Related Topic(s): Misogyny; Syria, Add Tags
Add to My Group(s)
Go To Commenting
The views expressed herein are the sole responsibility of the author and do not necessarily reflect those of this website or its editors.