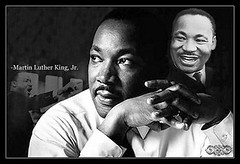 "I don't believe in death without resurrection. If they kill me, I will rise again in the Salvadorian people"" - Archbishop Oscar Romero, martyred, 24 March 1980

This is the spiritual thread that links the meanings of our lives. It is the way we pass over to other lives and return to our own. But without truth, we end up in the wrong place, living the wrong stories.

And don't the stories of certain special people inspire us to carry on their legacies because their spirits are far stronger than death? Their courage contagious? Their witness the triumph of life over death?

Don't they challenge us to imitate them, to kindle in us the fire of their resurrected spirits?

For Christians, Holy Week is the time for deep reflection on the story of the death and resurrection of Jesus and what they mean for us today. This year, the anniversary of the murder of the Christian prophet and martyr, Martin Luther King, Jr., falls on Easter Sunday, April 4, which gives rise to doubly deeper thoughts that cross religious boundaries where people of all faiths or none can unite in the spirit of non-violent resistance to the forces of war, poverty, racism, and materialism - violence in all its forms. Everything that stands in the way of what King called "the Beloved Community."

That Jesus met violence with non-violent love and voluntarily entered the darkness of death and abandonment is at the heart of the Christian faith. So too his Resurrection. If the Jewish radical Jesus had not been executed by the Roman state occupiers of Palestine, if all hope for his followers had not seemingly been lost, then his Resurrection could not have given birth to hope in his followers to carry on his spirit of love for the poor and downtrodden and resistance to violence.

Like Oscar Romero in El Salvador, gunned down by U.S.-trained death squads at the altar while offering Mass and subsequently named a saint by the Roman Catholic Church, Martin Luther King, Jr.'s witness and the truth about his death should be a central meditative focus this year. For the convergence of King's death on April 4, 1968, with Easter this April 4th and the last day of Passover offers us a way to contemplate what is now demanded of all people who yearn for the end to hatred, violence, and injustice, and the creation of a beloved world community where love and kindness reign.

The spirit of all the prophets and martyrs is about now, not then; about us, not them; it confronts us with the challenge to interrogate ourselves.

Shall we turn away from their witness? What truly animates our souls? Where do we stand? Do we support the state's power to kill and wage war, to deny people freedom, to discriminate, to oppress the poor?

It is always about now; the living truth is now.

To contemplate the lives of the prophets takes us very deep into the darkness where we encounter the murders of Jesus, King, Romero, and all those who have died trying to make peace and justice a reality. But only if we go into the darkest truths will we be able to see the light that leads us to accept the resurrected spirit of their resistance to evil.

Another prophet of our broken world, the Hindu Mohandas Gandhi, soul brother to King, echoed the words that many have heard, that "God chose what is weak in the world to shame the strong," when, in crossing over to the Christian tradition, he told us: "We dare not think of birth without death on the cross. Living Christ means a Living Cross, without it life is a living death."[1]

So what do we need to know about MLK, and why does it matter?

Related Topic(s): Assassination; Cross; Easter; Martin Luther King Jr; Prophet; Resurrection; Spirit; Truth, Add Tags
Add to My Group(s)
Go To Commenting
The views expressed herein are the sole responsibility of the author and do not necessarily reflect those of this website or its editors.