Dahlia Wasfi is an Iraqi-American justice activist who has written and spoken extensively on U.S. policy in the region of Iraq. She is currently writing a book on Iraq and recently published the article "Battling ISIS: Iran-Iraq War Redux." She discusses the past quarter century of U.S. bombing of Iraq.

Please encourage your local radio stations to carry this program every week!

Please embed the SoundCloud audio on your own website!

Past Talk Nation Radio shows are all available free and complete at
http://TalkNationRadio.org 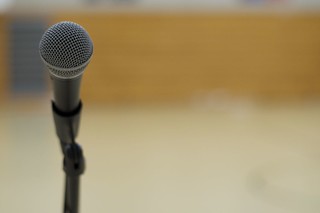 Talk Nation Radio: Dahlia Wasfi is an Iraqi-American justice activist who has written and spoken extensively on U.S. policy in the region of Iraq.
(Image by evanforester)   Details   DMCA

David Swanson is the author of "When the World Outlawed War," "War Is A Lie" and "Daybreak: Undoing the Imperial Presidency and Forming a More Perfect Union." He blogs at http://davidswanson.org and http://warisacrime.org and works for the online (more...)
Related Topic(s): Bombing; Bombing Hospital; Iraq; Iraq 3 Independent States; Iraq Army Troops; Iraq Civil War; Iraq Exit Solutions; Iraq Exit Strategy; Iraq Haditha, Add Tags
Add to My Group(s)
Go To Commenting
The views expressed herein are the sole responsibility of the author and do not necessarily reflect those of this website or its editors.