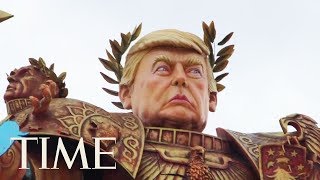 A massive Emperor Trump float presides over an Italian carnival. Not to be taken seriously, of course.
(Image by YouTube, Channel: TIME)   Details   DMCA

They really should have known better. After all, the evidence was there from the beginning. The erratic, impulsive behavior. The fascination with the spotlight. The ignorance and pettiness. The lying, cheating, arrogance and lack of empathy. It was a show. Always, just a show. Not surprising for a veteran of what was known as reality TV.

Yet the people of The Promised Land elected him to be their leader, even though he made it pretty clear to anyone who paid attention to his street brawl of a campaign that he didn't really want the job, just the attention and prestige that went with it. Run for leader. Insult everyone. Wow the audience. Maybe stir up new business for his brand-name empire ... Sell the name. It was always about selling the name.

It worked. Sort of. The other major candidate, a woman, was clearly more qualified for the job. Smarter. More experienced in government and diplomacy. Familiar with the constitution. And her husband had been elected leader in the past, twice. She understood the tremendous responsibility that went with the honor.

In truth, many citizens saw The Showman for what he was and did not like him or vote for him. However, many other citizens, saying they did not like her because she was too something or other (traits usually overlooked in males) chose not to vote at all or to vote for a third candidate with no chance of winning. A protest of sorts, they said. He's obviously unqualified, but we just don't like her, was the reasoning.

She still got the most votes, but that didn't matter under the arcane voting system used in The Promised Land that emphasized geography rather than actual numbers of people. Also, he cheated. He got secret help from another country, ironically (to all but him), a country that had long been an unfriendly rival for world leadership. The Other Land and The Promised Land had waged what was described as a Cold War for decades, stockpiling weapons and forming alliances with other nations. The Promised Land had emerged victorious in that struggle, so the Other Land was glad to help disrupt The Promised Land campaign and infiltrate voting systems to provide just enough geographical votes for The Showman to win. A "leader" who could be bought.

The investigations started immediately because there were actually laws prohibiting such interference in the country's elections. Those who had written the laws a long time ago feared influence over a leader who was beholden to foreign powers for their help in getting him elected.

Their wisdom was quickly validated as many early decisions made by the new, unprepared leader were to the benefit of The Other Land. He also filled key government positions and judgeships with people who were as equally unprepared or equally self-serving as he, or both.

Worst of all, the delegates who had been elected to Congress to write the laws and to provide a check on the leader at least those delegates from his same political party chose instead to overlook or defend his inexplicable, often cruel, decisions.

Of course, they knew who he was from his well-documented past and his ruthless campaign and had almost universally condemned him at first. But once he demonstrated that through his support among rank-and-file party members he had political power over their careers, his onetime critics bowed and kowtowed. They had staked their careers on the votes of people who were, in many ways, as ignorant, petty, boorish, racist, selfish and uncaring as their leader. None of the delegates had the courage to resist. Those who shared his views, of course, simply hoped to get rich in the process.

It didn't take long for the unraveling of the veneer of civilized governing to begin. The leader spent most of his time playing golf, watching television and sending messages to the people via social media. He gave his adult children "advisory" roles in his administration. He chose people to lead various departments of government whose main mission was to dismantle those departments. He rekindled feelings of racism and distrust of immigrants among those citizens who had previously been outvoted by the nation's more welcoming and open-minded citizens. He ignored all his campaign promises and lied about "accomplishments" daily. His supporters cheered.

In just two years, The Promised Land had lost its standing as the respected, trusted leader of the free world. He insulted its longtime allies and, instead, courted leaders who were as ruthless and thuggish as he. Murderers. All the while, he also saw to it that his private business interests gained financially from his position as leader. He insulted his generals, his senior diplomatic advisers, top law-enforcement officials and anyone who dared to disagree with him. He fired the top law-enforcement official who was investigating foreign interference in his election. Still, his party members in the Congress supported him and resisted any efforts to remove him from office.

Inevitably, being someone who never learned from his mistakes actually never admitted any mistakes. The Showman went looking for help from yet another country to help solidify the position which he hoped would become leader-for-life. He would withhold aid to Newkraine unless its leaders agreed to try to dig up some dirt on a political rival. He also abandoned longtime allies on the battlefield, leading top military leaders and even some of his own party supporters to criticize him.

The opposition party, having gained some power in the Congress because of his erratic behavior, began a serious attempt to remove him from power, using the laws of the nation as their guide. In response, some of his followers in the citizenry threatened civil war were he to be removed. Leaders of an extreme religious cult, which had supported his every immoral act, warned of eternal damnation for those who would dare to try to remove him from office. After all, he had been sent by God.

All the while, he lied, as did his closest aides, often contradicting themselves and compromising him in the process. To them it didn't matter. Until of course it did. To him. He fired those who couldn't keep up with his lies and managed to find others willing to try. He called those who criticized him or were testifying against him "scum."

By this point, even most of the citizens of The Promised Land had grown weary of The Showman and wary of what he might do next as commander-in-chief with an arsenal of nuclear weapons.

Related Topic(s): Arrogance; Cheating; Citizens; Commander-in-chief; Congress; Diplomacy; Ignorance; Leader; Nuclear; Orwellian; (more...) Political Hypocrisy; Reality; Take Trump Down; Terrorism; Truth, Add Tags  (less...)
Add to My Group(s)
Go To Commenting
The views expressed herein are the sole responsibility of the author and do not necessarily reflect those of this website or its editors.