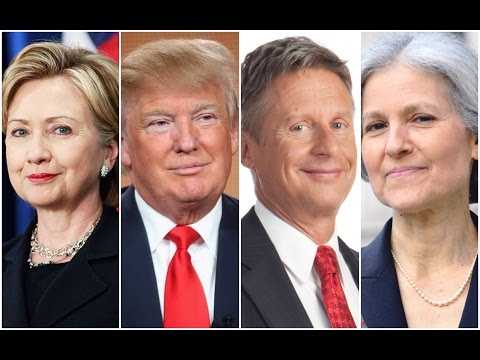 If ten major TV networks got together and decided to nationally televise a presidential debate restricted to Republican nominee Donald Trump and right-leaning Libertarian nominee Gary Johnson, while barring other candidates including Democrat Hillary Clinton, it would be recognized as an act of media bias or exclusion.

But what if the televised debates this fall are restricted to just Trump and Clinton? That, too, needs to be recognized as an intentional act of media exclusion.

In the coming weeks, we need to generate a debate about the debates -- who controls them and which candidates are included. That's the goal of a new petition launched by RootsAction.org, a group I co-founded.

Beginning in 1988, major TV networks granted journalistic control over the debates to a private organization with no official status: the Commission on Presidential Debates. The CPD is often called "nonpartisan." That's absurdly inaccurate. "Bipartisan" is the right adjective, as it has always carried out the joint will of the Republican and Democratic parties. (See George Farah's meticulously reported book, "No Debate.")

The commission grew out of a deal cut in the 1980s by GOP and Democratic leaders. Today, even though the US public largely distrusts the presidential candidates of the two major parties, TV networks seem willing to allow them to again dictate the terms of debate, including who gets to participate.

Here's a brief history of how the CPD took over:

-- "Televised Joint Appearances": In 1985, the national chairs of the Democratic and Republican parties, Paul Kirk and Frank Fahrenkopf, signed a remarkable agreement that referred to future debates as "nationally televised joint appearances conducted between the presidential and vice-presidential nominees of the two major political parties . . . It is our conclusion that future joint appearances should be principally and jointly sponsored and conducted by the Republican and Democratic Committees."

-- "Exclude Third-Party Candidates": In February 1987, Democratic Party chair Kirk and GOP chair Fahrenkopf together issued a press release and held a DC news conference to announce the formation of the Commission on Presidential Debates ("Commission on Joint Appearances" apparently didn't sound right) -- with themselves as co-chairs. The press release called the new group "bipartisan." According to the New York Times , Fahrenkopf indicated at the news conference that the CPD was "not likely to look with favor on including third-party candidates in the debates." The Times reported: "Mr. Kirk was less equivocal, saying he personally believed the panel should exclude third party candidates from the debates." The newspaper quoted Kirk: "As a party chairman, it's my responsibility to strengthen the two-party system."

--"Perpetrate a Fraud": In 1988, with the CPD taking control of the debates on behalf of the two major parties, the League of Women Voters announced its withdrawal from any debate sponsorship "because the demands of the two campaign organizations would perpetrate a fraud on the American voter. It has become clear to us that the candidates' organizations aim to add debates to their list of campaign-trail charades devoid of substance, spontaneity and answers to tough questions. The League has no intention of becoming an accessory to the hoodwinking of the American public."

Related Topic(s): Petition; Presidential Debates, Add Tags
Add to My Group(s)
Go To Commenting
The views expressed herein are the sole responsibility of the author and do not necessarily reflect those of this website or its editors.