As a throwback to the Clintonite 1990s, Biden says he feels the pain of victims but won't name many villains. That approach no longer works, and actually plays into the hands of demagogues like Trump. 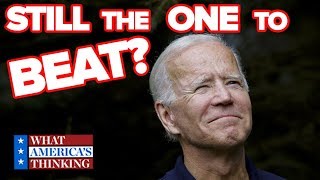 Is Joe Biden still the one to beat in the 2020 Democratic primary?
(Image by YouTube, Channel: The Hill)   Details   DMCA

You might ask what it takes to remember
When you know that you've seen it before
Jackson Browne, "Lives in the Balance"

Joe Biden is a throwback to an earlier time. Much of it could be called "the Clintonite era" when Democratic presidential contenders openly cozied up to the wealthy by appearing at one high-dollar fundraising event after another. A time when they served up (consultant-approved) language about "feeling the pain" of "working families" ... without identifying any corporate villains or transformative policies to fix the rigged system.

Donald Trump's victory seemed to put a catastrophic end to that era in November 2016. Unfortunately, Biden and the Democratic establishment still haven't gotten the memo.

Party leaders continue to believe that a Democrat can win the White House by catering to corporate donors and eagerly cashing their fat checks. Leading Democrats keep throwing their endorsements at Biden -- as he spends day and night glad-handing the 1 percent at top-dollar fundraisers.

Wake-up alert to Democrats: Donald Trump may well be the most effective faux-populist in our country's history. He was that in 2016, when he won "Rust Belt" swing states. And he remains that today for millions of voters -- despite his barrage of policies favoring the rich and powerful.

Like Hillary Clinton in 2016 (with her Wall Street connections and well-paid speeches), Biden would be a perfect target in 2020 for Trump's pretend-populism. Steve Bannon is gone, but Trump's campaign team will make sure every swing state-voter knows about Biden's record in the Senate serving big banks and credit card companies, as well as his 1993 vote to approve the disastrous NAFTA trade deal.

If there's a single word that explains why Clinton lost Michigan, Wisconsin, and Pennsylvania in 2016, it's not "Russia" or "Comey." It's probably not "misogyny." Most likely, that word is "NAFTA." Biden supported NAFTA, alongside most Republicans and a minority of Democrats in Congress.

In recent months, when I've publicly discussed Biden's long record of corporatism, some Democrats have complained that I'm "helping the Trump campaign," as if that campaign has not already catalogued every Biden vote and quote that a populist charlatan like Trump can exploit.

In continuing to rally behind Biden, Democratic leaders seem compelled to relive the tragic 2016 defeat -- as if trapped in a recurring bad dream. In fairness to Hillary Clinton, she was a far more informed candidate in 2016 than Biden is now and a far better debater, with campaign rhetoric and policies far more substantive than Biden's (a low bar).

The developing Biden nightmare became more vivid to me last week when I started tracking his series of high-dollar fundraisers, as described by individual pool reporters the Biden campaign allows into each "finance event." Here's the beginning of Thursday's report by Tina Sfondeles of the Chicago Sun-Times on a lavish lunch gathering:

"At the first of three Chicago fundraisers, Joe Biden stopped by a luncheon at the residence of billionaire real estate and casino magnate Neil Bluhm, also co-hosted by GCM Grosvenor CEO Michael Sackswho was not present due to a death in the family, and real estate developer Elzie Higginbottom. The fundraiser was in a sprawling 65th floor residence full of original art, including a Lichtenstein in the kitchen. Biden was introduced by Bluhm, who told his high-profile guests that both Elizabeth Warren and Bernie Sanders 'don't represent the Democratic Party' that he supports. Bluhm said Biden 'has the best chance of defeating Trump.'"

In between the first and last paragraphs, the Sun-Times reporter recounts that Biden served up 22 minutes of his standard stump-speech, decrying "our standing in the world" and worrying about "the soul of this country." It's the kind of stale rhetoric guaranteed not to offend billionaires.

Related Topic(s): 2016 Election; Billionaires; Economic; Joe Biden, Add Tags
Add to My Group(s)
Go To Commenting
The views expressed herein are the sole responsibility of the author and do not necessarily reflect those of this website or its editors.